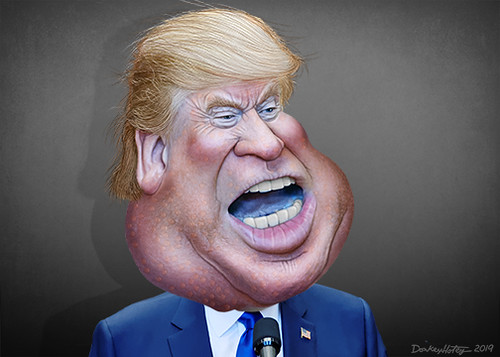 Donald Trump held a press conference called to hail the May jobs report which found unemployment fell to 13.3%, as the economy gained 2.5 million jobs. And then he sandbagged his own message with a quote that is already drawing outrage on Twitter.

You have to wonder if (1) Trump’s male and female political advisors actually wear wigs since they tore all their hair out trying to do damage control and/or change the subject on Trump’s many weird or inflammtory comments (probably yes), 2)when Trump opens his mouth he has a disorder that causes his foot to go in it, or another disorder which upon speaking sometimes causes the upper part of his torso to twist backwards and his head jerks down and automatically inserts itself into a certain part of his anatomy when he speaks.

A straightforward announcement and press conference could have had some impact. For instance, when he said this as reported by the Washington Post it might be debated by some but isn’t an unexpected or off-the-wall assertion:

Trump’s comments came as he touted new unemployment numbers for May during remarks at the White House. He argued that the better-than-expected numbers are a good thing for minority communities at a time when the country has been roiled by protests in response to the death of a black man, George Floyd, killed last week in Minneapolis while in police custody.

But then, as reported by Mediaite, he tripped on his own message-of-the-day by again talking about law enforcement domination. That phrase won’t cool things down, but the rest of that quote any President could have said. This was the warm up for the quote that’ll be used in political ads by Democratic and Republican opponents:

“Call in the National Guard, call me. We will have so many people, we have to dominate the streets,” Trump said in reference to containing protests. ” You can’t let that happen in New York, breaking into stores and all of the things and hurting many small businesses. You can’t let it happen. Equal justice under the law must mean that every American receives equal treatment in every encounter with law enforcement regardless of race, color, gender — they have to receive fair treatment.”

And then he said this:

How many people think George Floyd is looking down from heaven happy that this is a great day to be alive — I mean dead?

You can just PREDICT what the next ad from The Lincoln Project will be.