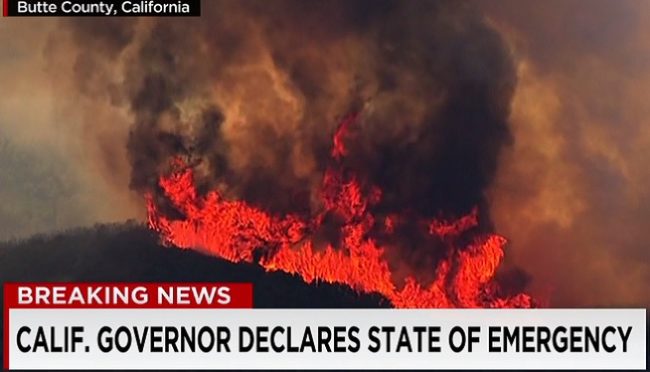 (San Diego) – Days after California Governor Gavin Newsom praised the federal government for its rapid response to catastrophic wildfires and power outages affecting millions of our state’s residents, President Donald Trump on Sunday threatened to cut off all future federal funding to California.

On Twitter, Trump accused Newsom of a “terrible job of forest management. I told him from the first day we met that he must ‘clean’ his forest floors regardless of what his bosses, the environmentalists, DEMAND of him. Must also do burns and cut fire stoppers….Every year, as the fire’s rage & California burns, it is the same thing-and then he comes to the Federal Government for $$$ help. No more. Get your act together Governor.”

But in an article titled ‘Trump threatens funding for California forest fires that didn’t happen’ the Los Angeles Times pointed out, “The big fires that hit Southern California last week burned expensive Los Angeles homes, swept through lush agricultural land, closed the 405 Freeway and threatened a presidential library. But they did not burn through large swaths of forests.”

Trump’s arguments that the state should do more to “rake” forest floors and do controlled burns on state controlledlands last year were similarly debunked. The state has substantially beefed up funding for controlled burns and clearing dead trees from state forests. The most devastating wildfire last year, the Camp Fire which killed 84 people in Paradise, California, did not start in a forest. Some others started in federal forests or on private land.

Newsom pushed back hard against Trump’s threat to end funding for firefighting and aid for fire victims in California.

“We’re successfully waging war against thousands of fires started across the state in the last few weeks due to extreme weather created by climate change while Trump is conducting a full on assault against the antidotes,” the Governor said, Poiltico reports.

In a Tweet of his own on Sunday, Newsom responded to Trump, “You don’t believe in climate change. You are excused from this conversation.”

Newsom spokesman Jesse Melgar pointed to hypocrisy on the part of the President. Melgar told Politico: “The reality is that while California has increased fire prevention investments and fuel management projects, the federal government has slashed its funding of those same activities.”

Critics contend that the President is using disaster victims as pawns for political retribution against a state that has fought back hard against many Trump policies. No prior president has tied disaster aide to political support.

Ironically, Trump’s threat to cut off aid to California during wildfires comes just three months after he offered aid to Russian President Vladimir Putin to help with Russian widfires. A statement from the Kremlin acknowledged, “The U.S. president offered Russia cooperation in fighting forest fires in Siberia. President Putin expressed his sincere gratitude for such an attentive attitude and for the offer of help and support” Reuters News reported on July 31st.