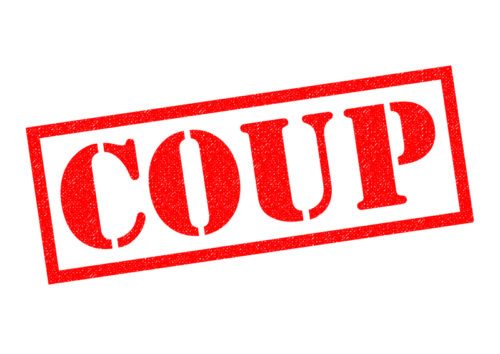 A far-right-wing lawyer for former President Donald Trump reportedly sought to convince then-Vice President Mike Pence to join the effort to overturn the 2020 election using a six-point legal memo. The outlandish memo urged Pence to use his supposed power while presiding over Congress to toss out the electoral votes from seven swing states that President Joe Biden won, potentially allowing Trump to stay in power. “The fact is that the Constitution assigns this power to the Vice President as the ultimate arbiter,” John Eastman, a former law professor at Chapman University, wrote in the memo. Th…

This memo outlines a coup. “Maybe Ted Cruz or Rand Paul…” can do our bidding. Rand and Ted are the go-to options for doing their overthrow. https://t.co/d5faxBAemt

Morning Shots: How Trump Planned to Overthrow The Election

Lordy, there as a memo.https://t.co/QcyCGiM2OZ

(Thread) Trump green-lit the coup as he hectored Pence to execute an Eastman-like maneuver, and thought that he and his mob might pressure both the VP and congressional Republicans into going along.https://t.co/QcyCGiM2OZ

Indict Trump atty John Eastman for his 6pt conspiracy to overturn the election. These traitors arrogantly assumed 81 million Biden voters would accept an overthrow of the incoming Biden admin. It wouldn’t be the United States anymore & Trump would’ve been forcibly removed in days

This is the six-point plan advanced by Trump lawyer John Eastman for VP Pence to overturn the election on January 6th.https://t.co/IkgmEuCW8b pic.twitter.com/CXWTVY1LL7

As of a few months ago (and still?), John Eastman, the author of the White House six-point plan for overturning the election, was chair of the Federalism & Separation of Powers Practice Group of @FedSoc. Any statement by them about one of their leading lights plotting usurpation?

Hey look. John Eastman — the guy who wrote a memo on how Trump could illegally hold on to the presidency — wrote an op-Ed objecting to Biden admin’s waiver of executive privilege so Jan. 6 Committee and others can find out all the OTHER ways he was trying to do the same. Shocked https://t.co/6ppx5Q9uh1

Trump has taken to saying he merely wanted Pence to send the tabulations “back to the states” and not to overturn the election. Eastman suggestions explicitly call for Pence declaring Trump the winner. https://t.co/hDbUXOTnja

This Eastman memo pretends to be based on my analysis but in fact takes snippets of my work wholly out of context and spins a totally fake web of “law” that no halfway decent lawyer would take seriously. No wonder it couldn’t fool even Mike Pence. https://t.co/EOBRRz3Ze5

Guess everyone in DC is just going to pretend John Eastman is one of Trump's mob lawyers rather than a Federalist Society leader and law school dean who clerked for Clarence Thomas and spent a lot of time developing a playbook for Republicans to steal an election. Polite society!

For more discussion on this story GO HERE.