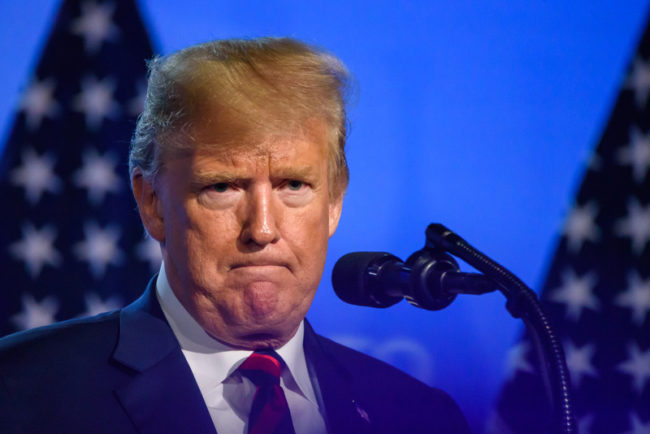 And so it is. The Daily Beast:

According to three people familiar with the conversations, the president, who refuses to acknowledge he lost the 2020 election as he clearly did, has not just talked to close advisers and confidants about a potential 2024 run to reclaim the White House but about the specifics of a campaign launch. The conversations have explored, among other things, how Trump could best time his announcement so as to keep the Republican Party behind him for the next four years. Two of these knowledgeable sources said the president has, in the past two weeks, even floated the idea of doing a 2024-related event during Biden’s inauguration week, possibly on Inauguration Day, if his legal effort to steal the 2020 election ultimately fails.

…According to two sources with direct knowledge of the matter, the president has privately bragged that he’d still remain in the spotlight, even if Biden is in the Oval Office, in part because the news media will keep regularly covering him since—as Trump has assessed—he gets the news outlets ratings and those same outlets find Biden “boring.”

Neither the Trump campaign nor the White House provided comment on this story on Friday.

Why did I (correctly) assume this would be Trump’s path?

Because it has been an enduring norm that after an election w new President gets an unfettered spotlight on inauguration day. Even if outgoing Presidents detested their replacements they allreceded during election day. This was one more norm left for Trump to shatter.

But will he get the kind of media cover he hopes?

Call me a cock-eyed optimist, but he makes an announcement during inauguration day or a speech it’s hard to imagine any network except for Fox News carrying it. He would no longer be a President, but an ex-President announcing a run for President four years away. Except for Fox News, it’s highly unlikely CNN, MSNBC, or any of the broadcast networks will treat a man who lost by such a huge popular and electoral vote margin the same as the Trump of 2015 or even earlier.

On the other hand, he still has the Twilight Zone far-right networks that will cover him like a blanket when he gets out of office.

But the bottom line is this: tinkering with the idea of running for election four years down the road and announcing it during an incoming President’s inauguration would be something so petty it has never been seen in American history.

So of course Trump would do it.

Apparently nobody cares what Trump does about Biden’s inauguration. pic.twitter.com/aGbX9x9wnK

There has never been anyone more interested in being president and less interested in actually doing the work of presidenting. https://t.co/uGby4TlOJW

I've been saying all along that Trump will file to run in 2024 on inauguration day as to steer the media away from Biden.

For more discussion on this story GO HERE.