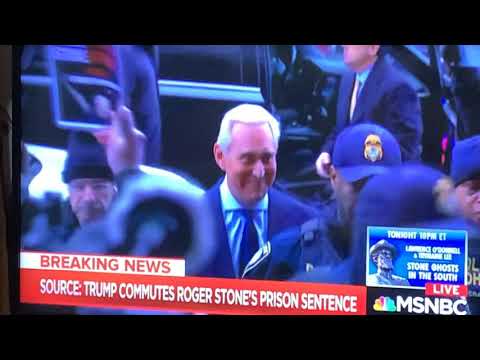 The big news is that Donald Trump has commuted the sentence of his longtime ally and political advisor Roger Stone. But is it news? By now it’s pretty clear that (1)Trump ignores societal and legal norms and there is insufficient push-back when he does (2) there are now two kinds of law in America. Laws for the “little people” and those who are loyal to Trump, who can get a pass or easier treatment pr big bucks on coronavirus business relief funds (while many other businesses can’t get them).

President Trump commuted the sentence of his longtime friend Roger J. Stone Jr. on seven felony crimes on Friday, using the power of his office to spare a former campaign adviser days before Mr. Stone was to report to a federal prison to serve a 40-month term.

In a lengthy written statement punctuated by the sort of inflammatory language and angry grievances characteristic of the president’s Twitter feed, the White House denounced the “overzealous prosecutors” who convicted Mr. Stone on “process-based charges” stemming from the “witch hunts” and “Russia hoax” investigation.

The statement did not assert that Mr. Stone was innocent of the false statements and obstruction counts, only that he should not have been pursued because prosecutors ultimately filed no charges of an underlying conspiracy between Mr. Trump’s campaign and Russia. “Roger Stone has already suffered greatly,” it said. “He was treated very unfairly, as were many others in this case. Roger Stone is now a free man!”

The commutation, announced late on a Friday when potentially damaging news is often released, was the latest action by the Trump administration upending the justice system to help the president’s convicted friends. The Justice Department moved in May to dismiss its own criminal case against Mr. Trump’s former national security adviser Michael T. Flynn, who had pleaded guilty to lying to the F.B.I. And last month, Mr. Trump fired Geoffrey S. Berman, the United States attorney whose office prosecuted Michael D. Cohen, the president’s former personal lawyer, and has been investigating Rudolph W. Giuliani, another of his lawyers.

Trump’s move follows a frantic effort by Stone to keep himself out of jail, contending in a series of recent court filings that the coronavirus outbreak presented a life-threatening risk. But the federal judge in his case, Amy Berman Jackson, rejected his push to delay his sentence deeper into the summer and ordered him to prison on July 14, noting that his sentence — imposed in April — had already been postponed for months.

While the timing of a pardon for Stone has been the subject of speculation for some time, there has been little doubt that Trump would grant some form of clemency if it appeared Stone needed that to avoid prison.

“Roger was a victim of a corrupt and illegal Witch Hunt, one which will go down as the greatest political crime in history. He can sleep well at night!” Trump tweeted last month.

There are no doubt thousands of people in federal prison who deserved a presidential commutation more than Roger Stone. But after President Trump’s intervention on Friday, Mr. Stone will serve none of his prison sentence. The president may have had the power to help his longtime friend. But that does not make it any less a perversion of justice — indeed, it is one of the most nauseating instances of corrupt government favoritism the United States has ever seen.

There is no doubt about Mr. Stone’s guilt….

…The United States is supposed to be a place in which laws apply equally to all. And while it never has — and never will — live up to that ideal in full, no modern president before Mr. Trump has so clearly renounced it. The president seems to be doing his best, within the confines of the U.S. constitutional system, to emulate the gangster leadership of Russian President Vladimir Putin, a man whose ruinous reign Mr. Trump has always admired. If the country needed any more evidence, Friday confirmed that the greatest threat to the Republic is the president himself.

And, of course, there is speculation now on how this’ll impact Trump political. It’ll perhaps help him with Fox News viewers, right wing political talk show host and his base (which will follow the line offered by Fox News and political talk show hosts). But it’s likely to further erode his diminishing standing with independents (many of whom now days are former traditional conservative Republicans) and other groups. It’s unlikely to gain him support and will likely cost him some.

This is really simple: Trump ordered Roger Stone to work with Wikileaks. Stone lied to Congress about it, Trump lied to Mueller about it, and Stone protected Trump's lie by choosing prison over flipping. Now Trump has repaid him.

So I guess the biggest outstanding question about tonight’s news is, what does Roger Stone have on Donald Trump that Paul Manafort doesn’t?

This really is the equivalent of pardoning Haldeman or John Mitchell. It's not like Nixon's pardon; it's not like GWBush's pardon in Iran Contra. it's crystalline corruption: Not just a political crony but the guy who still has the goods on Trump's criminal conduct and lying

Trump & Congress Republicans alike are sending voters an unmistakable signal that if he/they win reelection they will impose no limits on his willingness to shatter the rule of law. Reinforcing the message of impeachment: if he wins there is no excess they will not excuse, enable https://t.co/sJA1417abs

Hundreds of federal prosecutors will undoubtedly be thinking about resigning this weekend. Perhaps the fact that the election is only four months away keeps them in their jobs. But every one of them knows they are witnessing unprecedented corruption in the White House.

Donald Trump has now officially done more to help Roger Stone evade justice than he’s done to protect our troops from being targeted by Vladimir Putin.

President Trump has commuted Roger Stone's sentence after he was convicted for lying to Congress, obstruction, and witness tampering.

With every abuse of power, it's clear that the only "lesson" he's learned is that senators like Susan Collins will never hold him accountable.

Anyone check on @SenatorCollins? Is she dismayed? Disappointed?

Roger Stone's commutation was rubber stamped by 52 Republican Senators when they voted to acquit Donald Trump.

This is why we fight Trump and his enablers.

None of this would have happened if they had defended our Constitution, instead of a conman from New York.

Fixed the headline for you. https://t.co/qxZUK7OWPO

What’s bizarre about the White House statement granting Roger Stone clemency and blaming “the Left and its allies in the media” is that would mean that Attorney General Barr is part of the left wing conspiracy. Barr described it as a “righteous” prosecution.

Kids gotta go to school, but Roger Stone is at risk in prison. Got it.

In Donald Trump's America, Roger Stone is rewarded for lying and Lt. Col. Vindman is punished for telling the truth.

News of Donald Trump commuting Roger Stone's sentence proves what was obvious since the beginning. The pledge to "drain the swamp" was about as real as Trump University. Many will conclude Stone had a lot to say to implicate Trump, didn't say it, and was rewarded accordingly.

Schiff: "Trump has engaged in countless acts that are … destructive to our democracy while in office, but commuting the sentence of Roger Stone, a crony who lied and obstructed our investigation to protect Trump himself, is among the most offensive to the rule of law."

The man who calls himself the 'law and order' president has commuted the sentence of a longtime adviser who was found guilty of seeking to thwart congressional and FBI investigations into alleged ties between his presidential campaign and Russia.

All Roger Stone had to do was put out this not-so-subtle reminder how much dirt he has on the president, and poof! https://t.co/PrmJMAPKB3

GO HERE for more on this story.