Posted on January 17, 2023
You are here: Home / Politics / Trump calls to “liberate” some (Democratic) states that have coronavirus lockdowns 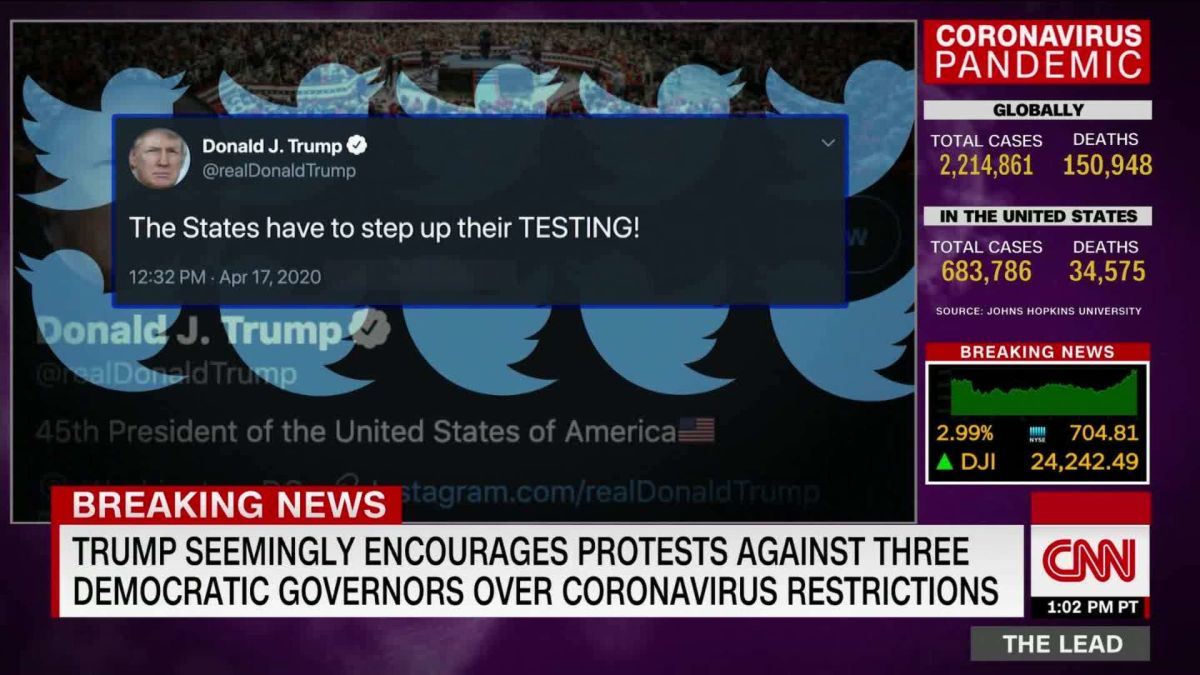 Shortly after a Fox News segment aired on protests by conservatives in states with Democratic governors that are on lockdown, Donald Trump issued what some say is a call for people to “resist” lockdown in three states that somehow coincidentally have Democratic governors. Was it mere polemics? Or another effort to polarize America and trigger his base into a fight or flight response that would turn a health issue into a political one? Or is it, as some also suggest, a virtual call for insurrection?
The Daily Beast had this good summary:

“In a disturbing new series of tweets, President Trump on Friday urged Americans to “liberate” three U.S. states that are run by Democratic governors amid protests over coronavirus shutdowns. The three tweets took aim at Minnesota, Michigan, and Virginia. “LIBERATE VIRGINIA, and save your great 2nd Amendment. It is under siege!” one tweet read. Trump on Thursday refused to criticize protesters in some states, including Michigan, who are flouting stay-at-home orders and social-distancing guidelines amid the deadly pandemic. “I think they’re listening, I think they listen to me,” he said. “They seem to be protesters that like me and respect this opinion, and my opinion is the same as just about all of the governors.”

“When President Donald Trump tweeted “LIBERATE MINNESOTA!” on Friday morning, some of his most fervent supporters in far-right communities — including those who have agitated for violent insurrection — heard a call to arms.

“The tweet was one of three sent from the president’s account, along with “LIBERATE MICHIGAN!” and “LIBERATE VIRGINIA, and save your great 2nd Amendment. It is under siege!”

“Trump’s tweets came after small protests by Trump supporters broke out in a handful of states, many of which were fueled by anti-vaccination and anti-government groups. Anti-government sentiment has percolated among far-right extremists in recent weeks over the stay-at-home orders governors have issued to prevent the spread of the coronavirus.

“Trump’s tweets, however, pushed many online extremist communities to speculate whether the president was advocating for armed conflict, an event they’ve termed “the boogaloo,” for which many far-right activists have been gearing up and advocating since last year.

“There were sharp increases on Twitter in terms associated with conspiracies such as QAnon and the “boogaloo” term immediately following the president’s tweets, according to the Network Contagion Research Institute, an independent nonprofit group of scientists and engineers that tracks and reports on misinformation and hate speech across social media.

“Posts about the “boogaloo” on Twitter skyrocketed in the hours after the president’s tweets, with more than 1,000 tweets featuring the term, some of which received hundreds of retweets.”

The New York Times reports that governors are alarmed:

“Mr. Trump’s tweets were a remarkable example of a president egging on demonstrators. Earlier this week, more than 1,000 protesters organized by conservative groups created a traffic jam on the streets around the State Capitol in Lansing, Mich., to complain that the restrictions were bad for small businesses. Other protesters, not in vehicles, waved banners in support of Mr. Trump and protested Gov. Gretchen Whitmer, who has been a target of his ire, by chanting, “Lock her up.”

‘…Mr. Trump’s tweets began just moments after a Fox News report by Mike Tobin, a reporter for the network, about protests in Minnesota and elsewhere. The report featured a protester from Virginia saying “those of us who are healthy and want to get out of our house and do business, we need to get this going again. It’s time.”

‘Gov. Jay Inslee of Washington State, where there was an early outbreak, said the president’s tweets could lead to violence and an increase in infections. “The president is fomenting domestic rebellion and spreading lies even while his own administration says the virus is real and is deadly, and that we have a long way to go before restrictions can be lifted,” Mr. Inslee, a Democrat, said in a statement.

‘At a news conference on Friday afternoon, Ms. Whitmer said she hoped the president’s comments would not incite more protests. “There is a lot of anxiety,” she said. “The most important thing that anyone with a platform can do is try to use that platform to tell people, ‘We are going to get through this.’”

‘“There is no one more eager to start re-engaging sectors of our economy than I am,” she added. “We are going to do this safely so we don’t have a second wave.”

‘And when Gov. Ralph Northam of Virginia was asked about the president’s comment at a virus news briefing Friday, he said: “I do not have time to involve myself in Twitter wars.”

‘On a phone call between Vice President Mike Pence and Senate Democrats, Senator Tim Kaine of Virginia asked why Mr. Trump was trying to incite division in the middle of pandemic, in reference to Mr. Trump’s tweets, according to a person familiar with the call. When Mr. Pence said that the administration was working respectfully with governors, Mr. Kaine noted that the tweets were not respectful”.

The bottom line is that once again there are really no substantive constraints on Donald Trump.

Once again Trump is proving himself to be President by the base, for the base, and of the base. And, once again, he is proving to be a President whose responses and actions seemed to be influenced by Fox News. He is the ultimate political entertainment culture President. Except in this case lives (people who may get coronavirus, or some nutcase getting violent) are at risk. The two constants are insufficient institutional push back and dead silence from Republicans.

#Trump taunting and blaming #Dem [email protected] in swing states: #Michigan, #Virginia and #Missouri. He thinks Dems walked into a trap: they told him (rightly) not to dare to play dictator with them; so he “agreed” — and set them up for blame for continued deaths and economic collapse.

As a Virginian (and damn proud of it), I'd remind the President that his order to "LIBERATE VIRGINIA" was already tried when his friends visited Charlottesville in August 2017.

Q: What's the difference between a folding closet door and the President?

The level of demagoguery, irresponsibility and incitement Trump's engaging in strengthens the already strong case for Congress (at least the House) to come back in session (at least virtually). Elected leaders need to come together to stand up to Trump and defend the rule of law.

This #President is now truly getting out of control. In talking about “liberating” the states, he is using language that could well lead to rioting. No one has done more to undermine our constitution and destroy our country’s values than @realDonaldTrump.

So, who’s ready to try someone else? pic.twitter.com/bz38t9JDOP

Trump’s tweets aren’t funny. This isn’t “Trump being Trump.” The President of the United States is encouraging civil unrest. He’s inciting violence. He’s threatening the lives of governors. His words here must be condemned by EVERYONE. And then it’s time for the 25th Amendment. https://t.co/dzLkj9m0Vh

Discontent with leading the most inept and lethal response to a life and death crisis in American history, Trump reached for a new low today by igniting what will soon be known as a “liberation movement.” The “Libbers” are here. A new chapter of crazy in American life is born(1)

The president’s statements this morning encourage illegal and dangerous acts. He is putting millions of people in danger of contracting COVID-19.

His unhinged rantings and calls for people to “liberate” states could also lead to violence. We’ve seen it before. 1/7

Has anyone broke the news to him that he actually is the president? https://t.co/4wX5HoatHD

Another “liberate” protest, this time in Huntington Beach, California.

And the guy with the “COVID-19 is a lie” sign – wearing a hazmat suit, mask, goggles, and gloves – says it all.


For more commentary on this story GO HERE.