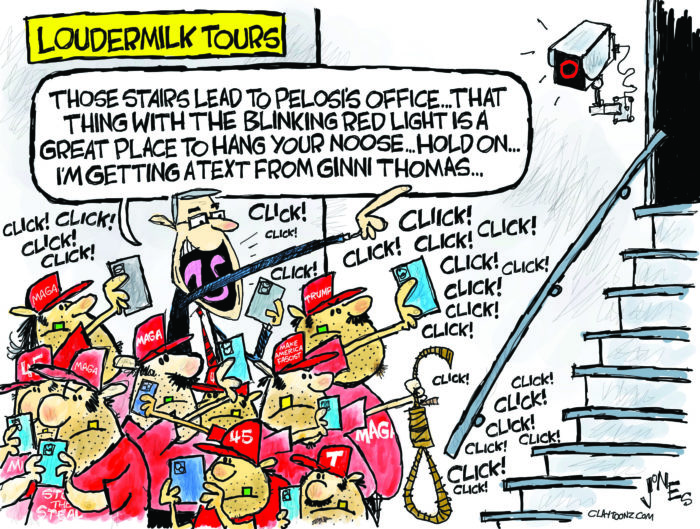 There have been a few developments since my last cartoon and blog on Republican congressman Barry Loudermilk giving tours to white nationalist Trump terrorists the day before the January 6, 2021 insurrection to overturn an election and make our nation an autocratic fascist country governed by a Cheeto potentate.

Shortly after the January 6 coup attempt to steal the election from the President-elect, Joe Biden, after he defeated Donald Trump by around eight million votes, a Democratic representative, Mikie Sherrill, made a public statement that some Republican members of the House gave tours of the Capitol and congressional office buildings to some of the terrorists the day before their attack.

Representative Sherril said she saw Republicans giving tours of the Capitol and showing off the tunnels. Keep in mind that this was during the COVID pandemic and tours were closed. Republican Loudermilk was upset over the accusation, even though he wasn’t named, and filed an ethics complaint against Sherrill for making the accusation. He said he never gave those tours.

Then, he admitted he gave the tours but only to decent church-going families who didn’t participate in the riot. Heck, when they saw the riot the next day, they turned around not wanting anything to do with it. Why, they’re good people who support the president (sic), referring to Trump. He even said that none of them were wearing MAGA hats.

First off, Loudermilk…people who support Trump support fascism, terrorism, racism, sexism, and a bunch of other bad isms. Second, it turns out at least one of those people on the Loudermilk tour was wearing a MAGA cap, taking pictures of stairs and tunnels, and was involved in the attack on the Capitol the very next day. Heck, Loudermilk’s tourist even made a helpful video shortly before the attack that can now be entered into evidence.

In the video, Loudermilk’s goon is holding a flag on a pole and being in a stabby mood, that he sharpened into a spear. Sounding as if he had just come from Giuliani’s liquor cabinet, the man screams into his cellphone camera, “There’s no escape Pelosi, Schumer, Nadler. We’re coming for you. We’re coming in like white on rice, for Pelosi, Nadler, Schumer, even you AOC. We’re coming to take you out, and pull you out by your hairs.”

Loudermilk said, “This false narrative that the Committee and Democrats continue to push, that Republicans, including myself, led reconnaissance tours is verifiably false.” It’s too bad for Loudermilk that one of his terror tourists is on video the day of the attack specifically outlining his terrorist goals while holding a weapon he crafted for stabbing Democrats.

Loudermilk has been subpoenaed by the January 6 Committee to talk about this but has so far refused to cooperate. Maybe if he’s charged in federal court for aiding and abetting sedition he’ll feel compelled to testify.

But another development comes from the Capitol Police who has decided to roll over for the Republicans by issuing a statement that they didn’t see anything “suspicious” about Loudermilk’s tour. Sure, there’s a guy on the tour in a MAGA hat taking pictures of tunnels and stairwells who later specifically states he’s “coming for” Pelosi, Nadler, and AOC, like “white on rice” while holding a very sharp object. What’s suspicious about that?

I think it’s time for the Capitol Police to take another look at all the video evidence and issue another statement. It’s also time for Loudermilk to come clean and testify. It’s also time that a lot of people who committed sedition to start being charged by the Department of Justice.

It’s been over a year and a half since terrorists tried to overturn an election and destroy our democracy. If we don’t charge the leaders, like Loudermilk and Donald Trump, for sedition, they’re just going to do it again.

The only thing at risk if we don’t is our democracy.