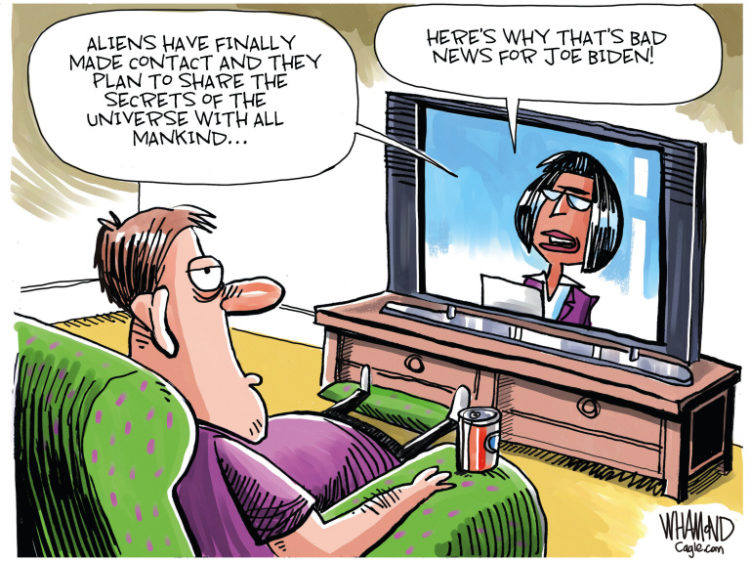 Those of us who have long tuned to CNN can’t say we weren’t warned.

Incoming CEO Chris Licht decreed on Aug. 19 that “this is a time for significant change” at the news network, “and you might not understand it or like it.”

Thus began his reign as a Trump Lichtspittle.

I don’t pretend to know exactly what’s going on at CNN; nor do its freaked out employees, one of whom told The Washington Post that the new brooms “seem to be sending a message, ‘Watch what you say, watch what you do.’” But some facts are indisputable. Licht has been signaling that he wants CNN to be more “objective” and more “respectful of differing viewpoints.” His overlords at the parent company, Warner Bros. Discovery – especially bigwig Trump donor John Malone – say that they want CNN to be more “neutral,” or, in Malone’s words, “more centrist.”

It doesn’t take a genius to decode that corporate gobbledygook.

So I’ve got to ask: With the future of American democracy in serious peril, how is the free press supposed to be “neutral”? Is there really some magic “centrist” midpoint between defending democracy and destroying it? At an historic moment when free elections are literally under assault, should the free press twist itself in knots to be “respectful” of those who are plotting the assault?

Licht dropped his first bomb in mid-August when he fired Brian Stelter, the host of Sunday morning’s “Reliable Sources.” Stelter, who still had time left on his contract, was well known for refusing to indulge “both sides” nonsense. In his final on-air appearance he stated: “It’s not ‘partisan’ to stand up for decency and democracy…It’s not ‘partisan’ to stand up to demagogues. It’s required. It’s patriotic. We must make sure we don’t give platforms to those who are lying to our faces.”

But the piece de resistance was articulated last week by veteran White House correspondent John Harwood. It was Harwood’s last day at CNN, because he was abruptly fired with time still left on his contract. He had apparently unnerved the new CNN higher-ups with his straightforward reports that the sky is blue and the earth is round and that there aren’t two sides to those truths. And for his final “stand up” outside the White House, assessing President Biden’s speech about the dangers of MAGA Republicans, the veteran journalist (previously at The Wall Street Journal and CNBC) unloaded both barrels:

“The core point (Biden) made in that political speech about a threat to democracy is true. Now, that’s something that’s not easy for us, as journalists to say. We’re brought up to believe there’s two different political parties with two different points of view and we don’t take sides in honest agreements between them. But that’s not what we’re talking about. These are not honest disagreements. The Republican party right now is led by a dishonest demagogue. Many, many Republicans are rallying behind his lies about the 2020 election and other things as well. And a significant portion – or a sufficient portion – of the constituency that they’re leading attacked the Capitol on Jan. 6. Violently. By offering pardons or suggesting pardons for those people who violently attacked the Capitol…Donald Trump made Joe Biden’s point for him.”

The Republican party right now is led by a dishonest demagogue. Is that mere opinion that warrants rebuttal the “other side”? Or is that a statement of objective reality?

The new bosses at CNN apparently believe there’s more money to be made, via higher ratings, if they re-brand themselves as something akin to Fox News lite. To put it charitably, that is a foolish decision – especially now, when most Americans now agree that MAGA is a threat to democracy. It’s stupid to buck mainstream public opinion.

I hold this truth to be self-evident: When one political party openly declares that it no longer believes in democracy, when indeed it is working non-stop to destroy it, honest journalists cannot take refuge in “neutrality.” Because in a national civic emergency, journalists need to be pro-democracy and pro-truth.

That is not bias. That is patriotism.