Categories Menu
Home » Military » The Words of the ‘Chosen One’ Matter

The Words of the ‘Chosen One’ Matter 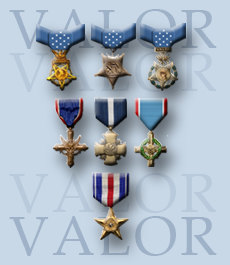 “One of the most important things we can all do for veterans is to honor the service of those who have gone above and beyond the call of duty.” – Defense Secretary Leon E. Panetta

During a speech at the 75th annual national convention of American Veterans, Trump, while addressing a World War II Medal of Honor recipient, remarked:

Nothing like the Medal of Honor…I wanted one, but they told me I don’t qualify, Woody. I said, ‘Can I give it to myself anyway?’ They said, ‘I don’t think that’s a good idea.’

The Medal of Honor is the U.S. highest and most prestigious military decoration awarded to U.S. military service members for conspicuous gallantry and intrepidity at the risk of life above and beyond the call of duty

This is not the first time that “the chosen one,” as he now refers to himself, has cracked jokes about the military decorations that our service men and women have earned with their blood and bravery on battlefields, nor the first time he has belittled their service and sacrifice.

This was just after the man who never set foot on a battlefield had been berating the Gold Star family of fallen Muslim-American U.S. Army Captain Humayun Khan, killed during the Iraq War – something Trump would do again and again.

And how can we forget when, during his presidential campaign, the man who never saw combat declared that Vietnam War hero and POW John McCain, was “not a war hero” and “I like people who weren’t captured.” Venom and sour grapes Trump continued to spew at McCain months after the Senator passed away. This from the man who during the 90s claimed that avoiding contracting sexually transmitted diseases on the dating scene was his “personal Vietnam.” In 1993 he said about this, “It’s pretty dangerous out there…It’s like Vietnam.”

Or how Trump insulted Adm. William McRaven, the Navy SEAL commander who oversaw the special forces raid into Pakistan that killed Osama bin Laden; or how he disparaged Army Gen. Stanley McChrystal, the four-star general who led US forces in Afghanistan; or how he showed an absolute lack of empathy and respect for the widow of Sgt. La David Johnson, who was killed in action in Niger; or when he offered the father of a fallen soldier a gift of $25,000 and sent the check to the grieving father three months later and only after the Washington Post reported that Trump had never honored his promise; or…

I just would like to ask of Trump, “Since you are ‘the Chosen One,’ Sir, could you at the very least choose your words more carefully when talking or tweeting about our men and women in uniform. You know, those brave men and women who have merited their Medals of Honor, their Purple Hearts. These are honors one does not award to oneself — not even in jest. Honors one cannot buy, one cannot ‘get’ from someone else and treat as a mere trinket.”