Posted on September 16, 2020
You are here: Home / Politics / The Trouble With Statues

Here’s a story for you:

And here’s a word for you: iconoclast.

(i-kon’?-klast’) n. 1. One who attacks and seeks to overthrow traditional or popular ideas or institutions. 2. One who destroys sacred religious images. [French iconoclaste, from Medieval Greek eikonoklastes, smasher of religious images : eikono-, icono- + Greek klastes, breaker (from klan, klas-, to break).] i·con’o·clas’tic adj.i·con’o·clas’ti·cal·ly adv. Word History: Among the Ten Commandments found in the Bible is the following: “Thou shalt not make unto thee a graven image, or any likeness of any thing that is in heaven above, or that is in the earth beneath, or that is in the water under the earth.” In the 8th and 9th centuries, these words inspired some Christians of the Byzantine Empire to destroy religious images such as paintings and sculptures of Jesus, the Virgin Mary, and the saints. The Medieval Greek word for a person who destroyed such images was eikonoklastes, formed from the elements eikon, “image, likeness,” and –klastes, “breaker,” and the Medieval Greek word is the source of the English word iconoclast. In addition to simply destroying many paintings and sculptures, the Medieval Greek iconoclasts also sought to have them barred from display and veneration. In English, the word iconoclast was originally used in reference to these Byzantine iconoclasts. During the Protestant Reformation, however, images in churches were again felt to be idolatrous and were once more banned and destroyed, and the word iconoclast came to be used of the Protestant opponents of graven images, too. In the 19th century, iconoclast took on the secular sense that it has today. American Heritage® Dictionary of the English Language, Fifth Edition. 2016

At this point, you have more than enough information for a typical blog post and can head to the coffee shop to impress your friends. However, you might want to stick around for what is to come.

i. When the statues were smashed.

Human history is maddening in its inconsistency, and statues offer a window into that history. Throughout it (and, most recently, with the Taliban and the Bamayan Buddhas and ISIL and their wanton destruction of antiquities) statues fall out of favor and are ceremoniously and unceremoniously destroyed to show the new “enlightenment” of the populace.

Iconoclasm is rife throughout history, from Mohammed’s destruction of the idols in the Kaaba to our current fetish for destroying all statues and permanent plaques that indicate honor to a now-dishonored figure (or, in many cases, a statue that happened to be in the wrong place at the wrong time after curfew.)

There is nothing new or non-human about this.

The pundits will pooh-pooh the objects of the iconoclasm, as a way mocking and humiliating the mob — and, most importantly as an attempt to delegitimize the underlying issues that caused the statue smashing in the first place. There is nothing unique nor particularly ennobled in this.

Drawing of the Buddhas of Bamyan, visited by Alexander Burnes in 1832

When was there a pundit who didn’t think [pronoun]self ABOVE the rabble?

And when did you ever meet a rational mob?

No: Iconoclasm is periodic NOT-ENTIRELY-RATIONAL spasm within the body politic to indicate that a change of thinking has transpired. Sometimes it’s legitimate; sometimes it’s nonsense, but it IS a characterizing behavior of humankind.

Certainly, a period of statue smashing leads to lots of work for sculptors and restorers. That much is certain.

It began with the removal of one statue and spread. At first it made sense: Confederate soldiers. Then it became generalized: Christopher Columbus, a Spanish Conquistador in Albuquerque, Francis Scott Key.

Then it became irrational: Ulysses S. Grant. The Wisconsin Women’s Monument, “Forward,” and others. Here in Oregon, the University of Oregon has decided to rename Deady Hall (to University Hall, Wikipedia moves at the speed of light!):

At the Oregon Constitutional Convention in 1857, Matthew Deady had advocated for discrimination towards African-Americans, who were not allowed to settle in the new state. Because of these views, Deady Hall has been the target of a renaming effort. On June 10, 2020, UO President Michael Schill sent a letter to the Board of Trustees recommending denaming [sic] Deady Hall because of Deady’s racist views. On June 24, 2020, the University of Oregon’s Board of Trustees announced that the name “Deady” would be removed as the name of the Hall until a date when a new name can be chosen. In the interim, the Hall will be named “University Hall.”

That’ll learn him! The oldest building on campus is finally released from the 19th Century notions of its eponymous namesake and his memory is correctly and righteously sullied, tarnished, besmirched, dragged through the mud/mire, stained, tainted, defamed, discredited, vilified, maligned, slandered, etc.

For the same reason the U of O and Oregon State yesterday decided to rename their regular Pac 12 clashes from the 1930s vintage “Civil War” to something else because that shows … what?

No. It’s statue smashing to show that the Universities “get it.”*

Perhaps we could settle on “the athletic contest of equal aggression.” Whatever helps ticket sales.

At a certain point the urge to smash statues — never a particularly rational process to begin with — turns into its basic, archetypal form: smashing statues, or, to quote the Incredible Hulk®, “HULK SMASH!!“

The same impulse that brought the Mississippi legislature to abolishing the old state flag, one corner emblazoned with the battle flag of the Army of Northern Virginia (the square “stars and bars”) is the impulse that brings the Orange County Democratic party call for the removal of the statue and name at the John Wayne Airport. That caused Princeton to remove Woodrow Wilson’s name from the eponymous college or center at Princeton University.

No, we can observe the iconoclasts at work, and we can appreciate the “hive cleansing” force that it represents, but we really ought not take all the rationalizations for renamings and other forms of (generally posthumous) renaming as though they had just realized that the famed personage (whom no one knows a thing about) was not a hoary head, but a headly whore, a vile caprice, a dead skunk in the middle of the road. As though we had, suddenly acquired a sense of smell.

That’ll teach them dead guys! (Or, in the case of “Forward” them formerly statuaried archetypal figures depicting the women’s movement — which celebrates a century of women’s suffrage this year, out of step with the zeitgeist as it now appears.)

Them what is looking for statues to smash is smashing statues.

Nothing more sophisticated that that.

iii. When the waters changed.

Let me paraphrase an old story, told by Idries Shah in more than one of his many books on Sufism:

All of mankind was warned that soon the waters would vanish and would then be replaced by water that would drive men mad. Only one man heeded the warning, and spent the days storing up a large supply of water in a cave outside of his town. And, soon enough, the prophecy came to pass and the waters vanished. The wells went dry, the streams and rivers stopped running and the man drank from his secret supply alone, realizing that he didn’t have enough to share. When he saw that the rivers had begun to run once again, he returned to town and found that everyone was back to “normal” except that “normal” meant that they were all crazy — in the same way. Their talk, their priorities, their styles, even their way of speaking was … crazy.

And so the man went back to his secret source and continued to drink from his supply — perhaps the only pure water left in the world. For a time, it remained that way; he would go into town if only for the presence of fellow humans, and he would observe their madness and even try to understand it. And then he would return to his pure supply. But, finally, he could stand his “apartness” no longer and he drank the polluted waters, and instantly became as they were. And he forgot about his pure water, hidden in a cave. A while later, one of his friends confided to him: “It’s so great to have you back. For awhile, we thought that you had gone crazy.”

I thought that story was fantastical when I read it fifty years ago. But over the years I have watched, and the waters change — Oh, they change much more than we’d like to admit.

iv. the problem with statues

The problem with statues is that they don’t change. People change. the waters change. History changes, but the statues don’t change, and, sooner or later, they must be smashed to show that “we” no longer subscribe to the admiration that the original statue engendered.

Drop the notion of “P.C.” because idol smashing was going on a long time before “politically correct” was ever formulated or coined. Idol smashing is the punctuation that separates eras.

It probably helps to have a Spenglerian view of history, but it’s not finally necessary.

While we will not admit it, the world and the “ethics” of humanity are in a state of constant flux that we can easily trace in the long history of statue smashing for reasons as varied as human fashion. 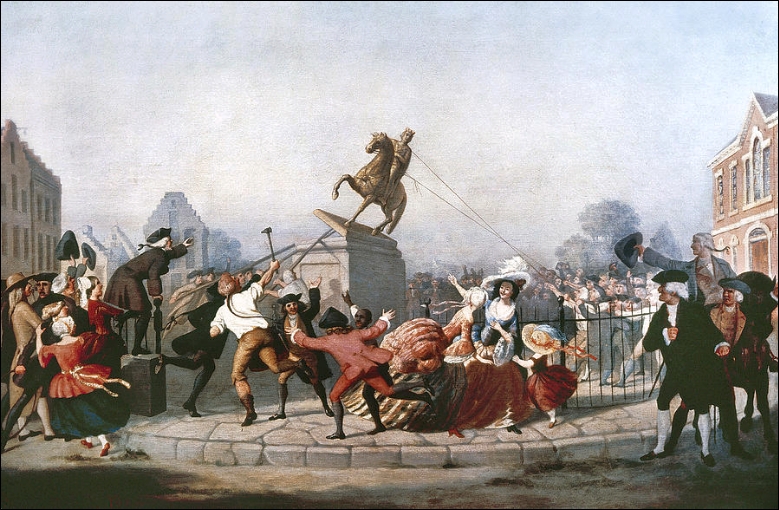 Pulling down the statue of King George III in New York by William Walcutt, 1854

That’s the problem with statues: they are permanent, while we and our world are not.

Here’s a fellow named Keats on the subject:

I met a traveller from an antique land, Who said—“Two vast and trunkless legs of stone Stand in the desert. . . . Near them, on the sand, Half sunk a shattered visage lies, whose frown, And wrinkled lip, and sneer of cold command, Tell that its sculptor well those passions read Which yet survive, stamped on these lifeless things, The hand that mocked them, and the heart that fed; And on the pedestal, these words appear: My name is Ozymandias, King of Kings; Look on my Works, ye Mighty, and despair! Nothing beside remains. Round the decay Of that colossal Wreck, boundless and bare The lone and level sands stretch far away.”

And that’s the trouble with statues.