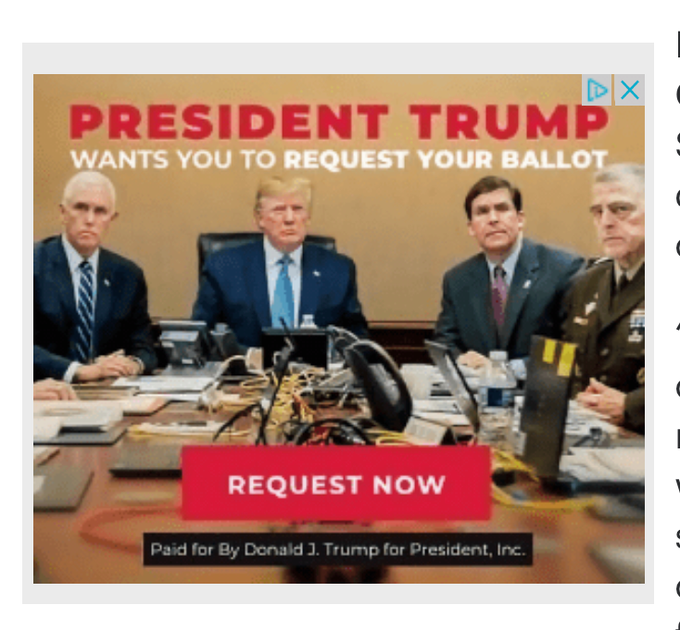 Well, the Chairman of the Joint Chiefs is too diplomatic to use those words when he was asked in an NPR interview what the chances are that the military would get involved in a contested presidential election November 3rd.

But General Milley was very firm, unequivocal, and precise with his answer: “Zero,” he said.

Of course, Milley said more than that.

“We, the military, stay out of domestic politics — very, very deeply rooted into the very essence of our republic,” he said. “And I would tell you that in my mind, if there’s a disputed election…it’ll be handled appropriately by the courts and by the U.S. Congress. There’s no role for the U.S. military in determining the outcome of a U.S. election. Zero. There is no role there.”

The NPR correspondent obviously asked the question because Trump has repeatedly stated, without a shred of evidence, that the upcoming elections will be “rigged,” “fraudulent,” violent — which his followers have stoked — and has insinuated that he might not accept the will of the voters nor commit to a peaceful transfer of power, but instead has raised the specter of ordering “American troops into any chaos around the coming elections.”

Trump has already revealed his penchant for using the military for law enforcement – threatening to invoke the Insurrection Act — during the recent protests in our cities after George Floyd’s death.

A recent piece discussed the significance of the oath of office for commissioned officers where the future officer swears to “support and defend the Constitution of the United States….”

In the same NPR interview and just before the question on military involvement in a contested election, the interviewer asked Milley why it is important to remind those in uniform to “hold the Constitution close to [their] heart,” as Milley had recently urged the troops.

Milley’s answer was revealing and reassuring:

“I always talk about the Constitution and its importance to us as a military,” he said, and continued:

And so that’s why I always remind ourselves of the oath, because we in the military, we swear literally a sacred oath. We swear to lay our lives down for those values and those ideas that are embedded within the Constitution. So I think it’s critically important to always, not just recently, but always remind ourselves of that. And I’ve been doing it for years, and I know many others do as well.

This is at least the third time the JCS Chairman has reassured the nation that the U.S. armed forces will have “zero” role in getting involved in any politics.

In June, expressing regret for letting himself be cajoled or tricked by Trump into walking with him through Lafayette Square for Trump’s infamous photo-op in front of St. John’s Church, and after photos of him there “sparked a national debate about the role of the military in civil society,” Milley told a military audience “We must hold dear the principle of an apolitical military that is so deeply rooted in the very essence of our republic.”

In August, Milley told Congress in a written statement:

I believe deeply in the principle of an apolitical U.S. military…In the event of a dispute over some aspect of the elections, by law U.S. courts and the U.S. Congress are required to resolve any disputes, not the U.S. military. I foresee no role for the U.S armed forces in this process.

Trump’s misguided belief that he can use “his” military in any way he wishes was once again flagrantly displayed in a recent Trump campaign ad (lead image) featuring Trump flanked by Defense Secretary Mark Esper and Gen. Milley. This immediately raised questions about “the ethics of senior military officials appearing to campaign for the president.”

Speaking truth to power, as is occurring more and more frequently, a spokeswoman for the JCS referred to Milley’s clear stand on his and the military’s apolitical role. “The campaign didn’t seek approval from Joint Chiefs Chairman Gen. Mark Milley to use his image in the ad,” a defense official told Politico.

It is somewhat disappointing, however, that Defense Secretary Mark Esper, in written answers to Congress, “stopped short of committing to keep troops away from polling stations next month…”