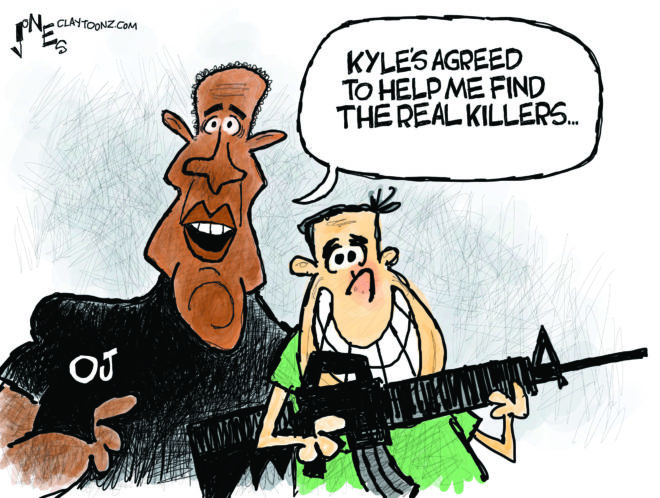 Conservative’s hypocrisy is well documented. What goes for them doesn’t apply to those they disagree with. It’s why Donald Trump can accuse others of being sex offenders while talking about “grabbing them by the pussy” and endorsing pedophiles.

For example, look at how conservatives treat Supreme Court rulings. If the court rules gay marriages should be legal, makes abortion the law of the land, or upholds Obamacare, then they’re activist judges and they got it wrong. But, if they rule home bazookas are a constitutional right, corporations are people when it comes to campaign laws, employers can use their religious bigotry to deny female employees healthcare, or racist fucknuts in yee-haw states can prevent black people from voting, then you can’t question it because it’s a court ruling. What do you know? Don’t you know the Supreme Court is full of lawyers and they’re way more qualified than you are when it comes to the law?

Yeah, like all lawyers agree on everything. If your defense is that a lawyer agrees with you, then all you have to do is pick the right lawyer. Sidney Powell is a lawyer.

Years ago, I was engaged in a friendly debate at a bar over the cause of the Civil War. The bartender was arguing it was over states’ rights and NOT slavery. He said his father was a history professor who believed it was over states’ rights, so case closed. I pointed out that for every history professor he could find arguing the states’ rights b.s., I could find 20 who disagreed with him. In fact, that case is closed. The Civil War was over slavery. Conservatives do the same thing with the black-friend defense.

They’ll argue someone isn’t racist, like Donald Trump, because their one black friend said he’s not racist. Suddenly to them, a race is a monolith.

Take the OJ Simpson case for example. OJ had two trials. One for murder and the other for liability. The juries disagreed with each other. One jury found him not guilty. The other jury found him liable.

So, when your local idiot argues Kyle is innocent and justified in doing what he did because a jury said so, you can point out, no…they didn’t. The jury found him not guilty. “Not guilty” doesn’t mean the defendant is innocent. It means the prosecution failed to make its case.

In Kyle’s case, you had a very inept prosecution going up against a defense that was heavily funded by America’s white nationalists and a biased judge. The prosecution didn’t have a chance.

In OJ’s case, you had a very dysfunctional prosecution outwitted and outgunned by the defense team. Robert Shapiro put together a dream team of lawyers, that included F. Lee Bailey and Alan Dershowitz, and was masterminded by Johnny Cochran, who was probably the nation’s best defense lawyer at the time. Prosecutors Marcia Clark and Christopher Darden basically handed “if it doesn’t fit, you must acquit” to Johnny Cochran.

Do you recall any white person going from “OJ did it” to, “Well, a jury found him not guilty, so that means he didn’t do it”? Maybe just Robert Kardashian, who went from defending OJ and picking up his laundry to believing he’s guilty and that he helped free a murderer.

It’s been over 25 years since the OJ trial, and he still hasn’t found the “real killers.” But I have, and I put them both in this cartoon.