I have been sick. This is not an uncommon event, alas. And I have been stuck at home. Ditto.

The U.S. was beset by denial and dysfunction as the coronavirus raged  —  By the time Donald Trump proclaimed himself a wartime president — and the coronavirus the enemy — the United States was already on course to see more of its people die than in the wars of Korea, Vietnam, Afghanistan and Iraq combined.

And, since I have a television set, I have been watching the Greek Tragedy of Donald Trump’s Open Mic (formerly Mike Pence’s Open Mic and Pandemic Show) and the hurdy gurdy of the “approved by the FDA for use against coronavirus” of the drug that has just entered clinical trials for efficacy against the novel coronavirus er, Covid-19, which is kind of like, “let’s have unprotected sex while we wait for the results of our AIDS tests!”

Still, what’s weird, and perhaps I’m wrong, but Mr. Trump has thus far not said a word of condolence to the families of the American dead. The (as I write this) 8452 dead.

And throughout this long day’s journey into Donald Trump’s id, and attendant maledictions of his native Englitch (sic) language, I can’t help but keep thinking of the Mayor of Amity in Jaws (the movie, not the book; Hooper dies in the book.)

The mayor is a small, venal man, provincial in every sense of the word whose entire political philosophy seems “the Island’s business is business.” (And, likewise, whose wardrobe choices are questionable.)

Here’s the official Mayor of Amity denies that there’s a problem clip from Universal:

And that’s without the press conferences.

Someone in over his depth. Someone in deep denial. Someone seemingly obsessed entirely with the almighty dollar.

In the movie, the Mayor of Amity is a cliché, yes, but also an archetype.

And when you strip away the bluster, the word mangling (I cannot help but keep thinking of a paraphase of Oppenheimer’s quote upon seeing the atomic bomb detonate at Trinity site in New Mexico:  “Lo. I am become Covfefe, Destroyer of Words.”)  when you strip away the self-obsessed Retellings of History in Trump-O-Vision (extremely myopic), what remains is the Mayor of Amity, Donald J. Trump.

That was a NASTY question Sesame Street! 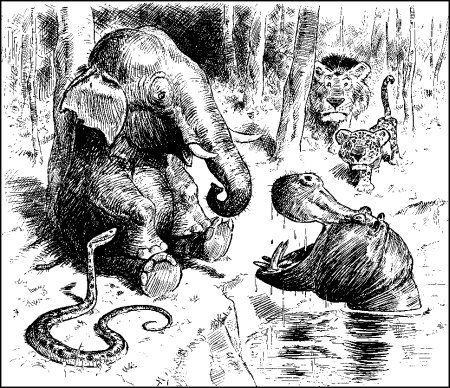