The Kurds: Betrayed Once Again 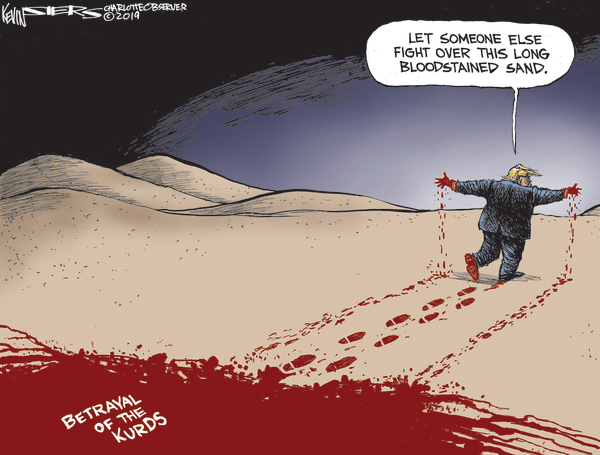 The Kurds have been betrayed and abandoned four times by the West in the last 100 years. In the aftermath of WWI the Middle Eastern Turkish-dominated Ottoman Empire collapsed. Great Britain and France stepped into the power vacuum and redrew Middle Eastern national boundaries. During this process they promised the Kurds a country of their own, a promise they never fulfilled. Consequently, the Kurds are scattered in the mountainous regions of Turkey, Syria, Iraq and Iran.

Fast forward to the 1980s. the Iraqi dictator Sadaam Hussein used the camouflage of the Iraq-Iran war to perpetrate genocide on the Iraqi Kurds. The Reagan administration knew about the atrocities and did nothing. Later, after Hussein was militarily expelled from Kuwait in 1991 by the United States and its allies, President George H.W. Bush exhorted the Iraqi Kurds to openly rebel against Hussein, promising to support them if they did so. No support materialized and Hussein went on another genocidal rampage against the Kurds.

Now a fourth betrayal. Since 2015 the Syrian and Iraqi Kurds have been the leading group in the coalition to defeat ISIS. American troops have fought alongside the Kurds and found them to be staunch allies. With the defeat of ISIS the Kurds have taken over a large portion of northeastern Syria. Turkey, which views the Kurds as a troublesome minority with terrorist tendencies, views this Kurdish success with alarm. Ergodan, the Turkish dictator, has long wanted to attack northern Syria and destroy the Kurdish military, but the presence of American troops prevented this. In October we abandoned our Kurdish allies, repositioning our troops to protect Syrian oil assets, forcing the Kurds to ask the Russians and the Syrian dictator Assad to protect them from the invading Turks.

Once again, we have a president who does not understand that successful foreign policy, like successful personal relationships, is based on trust, which can only be built on consistent loyalty. Once again we have a president who does not grasp that there is a two centuries-long global struggle between democracy and non-democracy. In this struggle alliances between democracies matter; no one democracy can carry on the struggle by itself. Alliance leadership also matters. We have been the democratic alliance leader since 1942, and President Trump is abandoning our leadership role. And since no other democracy is stepping up to take our place, a chaotic power vacuum is created which is gleefully being filled by the dictatorial non-democracies, as recently happened in northern Syria.

The betrayal of the Syrian Kurds is part of a larger pattern: The United States is withdrawing from the world. Perhaps this is a natural reaction to our long seemingly endless commitments in Afghanistan and Iraq, but it comes at a bad time.

Fascism is on the rise around the world, and fascist dictators are eagerly advancing as we retreat. President Trump is both an isolationist and a pacifist. His ‘America First’ slogan says it all: America should only expend its resources on itself, and we should stop trying to change the world for the better. I’m sure many Americans agree with the president, but he and they are forgetting arguably the fundamental political lesson of the 20th Century: the pathetic reaction of the democracies to Hitler in the early 1930s. At the time Hitler was militarily weak and could have been easily overthrown by Great Britain, France and the United States.

Instead they did nothing, in spite of the fact that in 1923 Hitler publicly laid out his plan for world conquest in Mein Kampf. And how does this ancient history lesson relate to now? Very simply, the dictatorial impulse is alive and well. Men with an insatiable lust for power have gained control of countries and have the same Hitlerian ambition: take over as much of the world as they can, and destroy all democracies along the way.

We need to elect a president who understands that we cannot retreat from the world and expect our democracy to survive.