You are here: Home / Arts & Entertainment / Humor / The Great 2020 Quarantine 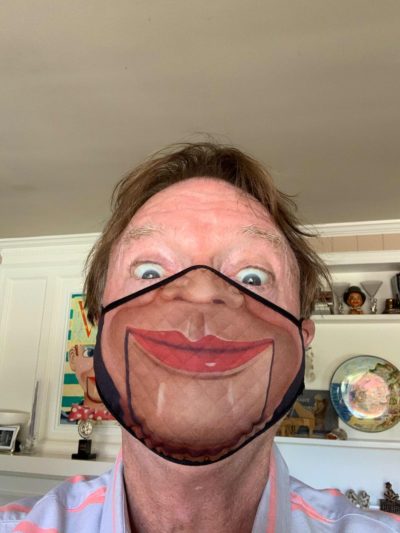 First of all this is not a political rant. If you are looking for that…. look almost anywhere else on any platform and you will find something that will get your “dander up” as they say in Texas. I have not written a blog since February, before Sandi and I traveled to Berlin and returned to a United States and world that was shutting down and staying at home. With what seemed like the twilight zone going on and chaos surrounding our leadership, there has been nothing to write about. Nothing that seemed positive as least.

I don’t have any known co-morbidities except for being in *that* certain age group, but I wear a mask anytime I go outside. I am not making any political statements by wearing a mask, nor do I understand why wearing one, especially in an enclosed space like a store, is in any way an infringement on my rights. I wear a mask in public the same way I wear pants in public. No doubt I could make a case that my freedom to go bare-ass naked any where I want to, and it might be “more comfortable”, but I don’t.

In the early days of the Pandemic I fired up my mom’s old sewing machine and made masks for friends and family. I felt like a male Rosy the Riveter doing my part for a national crisis since masks were at that time in short supply. Eventually, as I knew the capitalist would, manufacturers ramped up the production of all kinds of masks and they became ubiquitous. I now have an entire wardrobe of masks that get washed, revamped and put back in rotation. I have several that reside under the sun visor of my JCW (my red mini) just in case I forgot to get one leaving the house.

I got the mask in the picture above from an on line site. It is actually the mouth of Jerry Mahoney especially made for me. I also have a black one that simply has the words “Instant Ventriloquism”. Just trying to keep my career alive. Upon seeing me in the Jerry Mahoney mask my wife said, “You’re not going out in public like that, are you?”

I said, “Perhaps….” She indicated that in the case that I did wear it in public, she would maintain a double the 6’ recommendation of social distancing from me.

Now one of the rituals that I have followed during this time of forced retirement, is to take Harry the Wonder Dog on long walks. He loves to walk and never gets tired. We average 3- 5 miles a day and I have seen more of my extended neighborhood than ever before. Most importantly I never walk the dog with out a mask on. However, if you wear a mask most every day, like underwear, you run out of clean ones and eventually get to that pair of underwear that is at the bottom of the heap. So there are times when the only mask I have to wear is the “Mahoney”.

The other thing that is important to this discussion is: Harry the Wonder Dog is a chihuahua/ pug mix and an alpha male. He is the greatest, sweetest most loving dog until he sees another dog on a leash and he turns into Napoleon the dog, bearing his teeth in a spontaneous assault. We have worked with great trainers and slowly he is getting better. It is not every dog that sets him off now, but it is like playing Russian Dog roulette.

One of the things we have found it helps if I am able to wave and say hi to the other dog owner before they can pass us. If Harry thinks it is a friend, then he is more likely not to turn into the Tasmanian devil. So I become the masked welcome wagon with a friendly wave and “good morning “ to everyone I meet on our long walks. In pre-pandemic days I would just smile, but with a mask when my smile is hidden, I find that a friendly voice is necessary to convey the spirit.

Some are friendly back to me, some are dismissive, some are talking on the phone and some have ear buds and never even know that we have passed by. I would say that about half of the people I see on the street wear a face covering. There have been mask-less neighbors who pass by and apologetically say “I forgot my mask… sorry”. Some pass by without a mask much closer to me and Harry than acceptable and seem to want a conflict as if the mask is some sort of political protest they don’t agree with.

Sometimes I get a laugh when I toss out a friendly good morning on our walks. It is then that I realize I am wearing the “Mahoney” and a friendly good morning from me, a guy with a plastic painted on smile, is just what LA needs right now. I run into neighbors who say,“That is really creepy” but others (usually younger) say “Great mask where did you get it.”

Yesterday, Sandi and our other dog Boo decided to do a short part of the walk with us. We were several blocks from the house when I saw a lady approaching with her dog on the other side of the street. I immediately went into “Harry fooling” mode. I held up my hand with a long armed wave and said, in a very proud voice only slightly muffled by the mask, “Hello, It’s a great morning…”. She burst out laughing and yelled back … “Yes it is…Ha Ha” . The trick worked because Harry did not flinch or try and charge. Sandi said, “What was she laughing about?” At first I just assumed it was the Mahoney, but I had a simple grey mask on with nothing printed on it because I was out in public with the woman I love. I purposefully did not wear that mask.

I thought back on this event wondering what I had done that amused the passerby. Then I understood it from her point of view. The hand I held up to wave at the neighbor was holding a green poop bag bundantly filled with dog shit. I held up a bag of shit exclaiming what a great morning it was, like a father excited over successfully toilet training his two year old.

“Hello, It”s a great morning for shit.” It’s my new neighborhood pandemic greeting, Works of me on so many levels.

As you were,
Jay

Jay Johnson is a ventriloquist and actor, best known for his role on the television show Soap. He played Chuck Campbell, a ventriloquist who believed his puppet Bob was real and demanded everyone treat Bob as human. He has also appeared extensively on television as a ventriloquist, actor and celebrity guest on game shows. He hosted two series of his own, So You Think You Got Troubles (1983) and Celebrity Charades (1979).

Jay Johnson: The Two & Only! written and performed by Jay Johnson, opened on Broadway to rave reviews at the Helen Hayes Theatre on September 28, 2006. The show earlier had an acclaimed off-Broadway runs in New York and was also performed in Cambridge, MA, and in Los Angeles. It can now be streamed on Amazon Prime.

The Massachusetts performance garnered the New England Critics Award, and in Los Angeles Johnson received the 2006 Ovation Award for Best Solo Performance. Jay Johnson: The Two & Only! deconstructs and demonstrates Johnson’s lifelong obsession with the art of ventriloquism. The show is a Valentine, not only to the art, but also to his mentor and friend Arthur Sieving, who created Johnson’s first professional puppet. The show is aided and abetted by a cast of ventriloquated characters, including his Soap alter ego, Bob. Johnson won the 2007 Tony Award for Best Special Theatrical Event for the show. He is the only ventriloquist to ever be nominated and win an American Theatre Wing Tony Award or an Ovation Award. The show is available on DVD HERE. This article is from his blog The World is a Stage. He also has a lot of videos on You Tube.