Posted on September 16, 2020
You are here: Home / Arts & Entertainment / Writing / ‘The Fifth Risk,’ a Must-Read in the Time of the Coronavirus 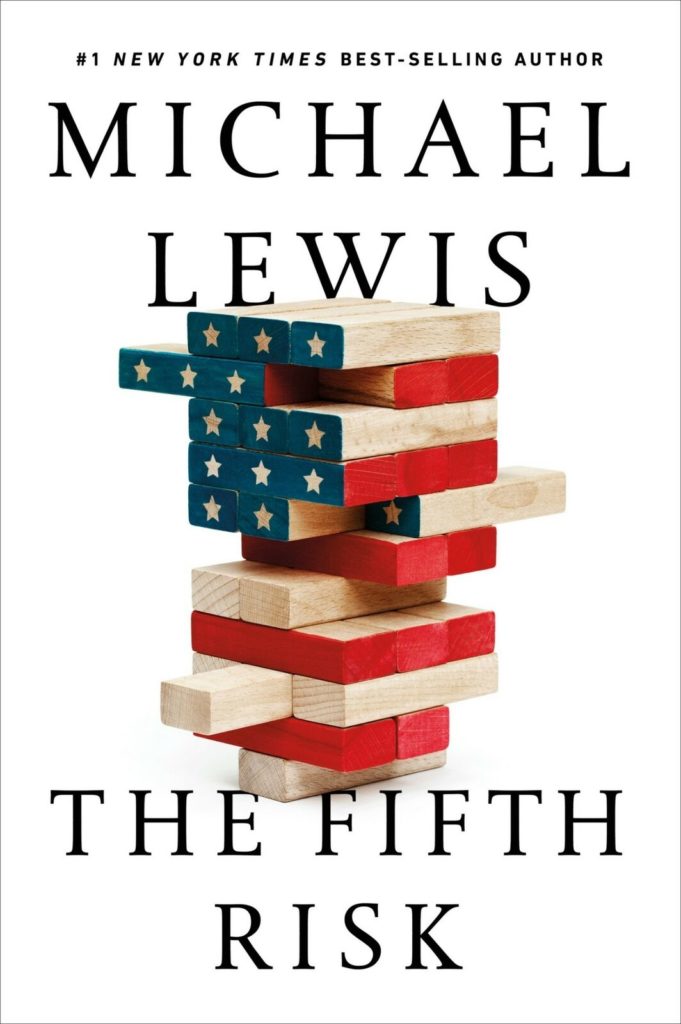 After the dead are mourned, after the deaths are counted and after the thousands — the millions – of heartbreaking personal stories are recounted, there will be the post-mortems, the analyses, the investigations into and why our country was so ill-prepared for the coronavirus crisis. A pandemic that would extinguish and devastate so many lives.

But already we can look two, three months back – before Trump branded himself a wartime president — to appreciate how the Trump administration downplayed, even ignored, the looming crisis. A crisis that would ruin millions of livelihoods and cost perhaps tens of thousands of lives.

Some are already retracing “the failures over the first 70 days of the coronavirus crisis.”

We see the president of the United States, on February 26, tell the nation about coronavirus cases in the US, “You have 15 people, and the 15 within a couple of days is going to be down to close to zero, that’s a pretty good job we’ve done.” ‘

Or the day before: “The Coronavirus is very much under control in the USA…Stock Market starting to look very good to me!”

And the day before that: “I think that’s a problem that’s going to go away…They have studied it. They know very much. In fact, we’re very close to a vaccine.”

But it is now clear that days or weeks before that, U.S. intelligence agencies “were issuing ominous, classified warnings in January and February…while President Trump and lawmakers played down the threat.” A time when intelligence assessments about the global danger posed by the virus were making “the rounds in the executive and legislative branches, but the American people weren’t told about them.”

In early January, those agencies “were signaling the seriousness of the threat to Trump by including a warning about the coronavirus — the first of many — in the President’s Daily Brief.”

Alerts even came from a top White House adviser, warning that the coronavirus crisis “could cost the United States trillions of dollars and put millions of Americans at risk of illness or death.”

Instead, as those first alarms were sounding, “the Trump administration squandered nearly two months that could have been used to bolster the federal stockpile of critically needed medical supplies and equipment.”

To fully understand how we got here, to fully appreciate the genesis of the crisis, one needs to look back farther, past the 1,174 troubling days Trump has been in power. Past the 1,174 days Trump has mismanaged and squandered by demanding total loyalty and adulation, by suppressing or disdaining expertise and the truth and by working relentlessly for personal political interests, for additional power and for his reelection.

A 2018 book takes us back to those days. The days preceding the transfer of power from President Barack Obama to Trump and the days after Trump’s inauguration when he was busy dismantling everything that carried an Obama name or legacy.

The book, The Fifth Risk, by Michael Lewis, written when COVID-19 was only a twinkle in the devil’s eye, masterfully – and harrowingly — answers the question that appears on the inside of the book’s front jacket “What are the consequences if the people given control over our government have no idea how it works?”

Using three large and important government agencies as examples – Departments of Energy (One of the departments Rick Perry wanted to get rid of – “Oops”), Agriculture and Commerce — Lewis brilliantly illustrates how Trump and his loyalists totally botched the preparation for the transition of power and the transition itself, portending the consequences the nation was to suffer during the next 1,174 days of the Trump era, culminating in the crisis our nation finds itself in today.

Perhaps envisioning what would happen three years later, Lewis lays out how the outgoing Obama administration begged to prepare the incoming administration to deal with potential crises while keeping political ideology out of the process.

Notebooks were assembled (to be ignored); briefings were prepared (never to be heard). Outgoing experts were ready and more than willing to pass on invaluable experience and information to the incoming members of the Trump administration — neophytes who showed a shocking lack of interest and qualifications for grabbing the reins of government.

This continued after the transition. All too often nobody or just one or two persons appeared at meetings or briefings displaying appalling incuriosity; briefings and meeting were cancelled or postponed for months and sometimes “finally one person showed up, took one day with the Depts and basically disappeared again.” The few-and-far-between Trump appointees “who did show up were shockingly uninformed about the functions of their new workplace.”

In the meantime, the incoming president was crowing by tweet:

Very organized process taking place as I decide on Cabinet and many other positions. I am the only one who knows who the finalists are!

Referring to the intellectual laziness of the incoming Trump administration, Lewis writes that six months after Trump took office, there was still no candidate to run the Centers for Disease Control nor heads of, or qualified staff at, several gutted departments, agencies and offices.

Three months later, at the Department of Agriculture, in jobs paying $80,000 “the Trump team had inserted a long-haul-truck driver…a gas company meter reader…the owner of a scented candle company…” none having relevant skills, but all having in common unquestioned loyalty to Donald Trump.

Nearly two years later, “of some 700 key positions in government, slightly more than half [had] been filled.”

I’ll let the reader discover what Lewis’ first four risks implied in the title are.

However, the fifth risk is “the risk a society runs when it falls into the habit of responding to long-term risks with short-term solutions.” Among the “sub-risks” an incoming president should worry about, Lewis says, are fastmoving pandemics.

Certainly relevant to the mess we find ourselves in are Lewis’ words describing Trump and his administration: “Willful ignorance,” “the desire not to know” and “If you want to preserve your personal immunity to the hard problems, it’s better never to really understand those problems.”

The incoming Trump administration dismissed data, especially data they did not like. Data “disappeared across the federal government…” in particular climate change data.

The country’s first chief data scientist, DJ Patil, in his “exit memos,” wrote how, using the nation’s vaccination data, one could create “heats maps for disease,” answer the question “where are the epidemics waiting to happen,” etc. Patil suspects his memos were never read, and adds, “Actually, if we don’t have data, we’re screwed.”

One review of Lewis’ book perhaps says it best:

Michael Lewis’s brilliant narrative of the Trump administration’s botched presidential transition takes us into the engine rooms of a government under attack by its leaders through willful ignorance and greed. The government manages a vast array of critical services that keep us safe and underpin our lives, from ensuring the safety of our food and medications and predicting extreme weather events to tracking and locating black- market uranium before the terrorists do.”

As to the question on the inside of the book’s jacket, “What are the consequences if the people given control over our government have no idea how it works?” We are living them now.

Michael Lewis is the author of many New York Times bestselling books on various subjects. In addition to The Fifth Risk, he has written The Undoing Project, The Big Short, The Blind Side, Liar’s Poker, Moneyball. He is also a columnist for Bloomberg Opinion and a contributing writer to Audible. He holds a bachelor’s degree in art history from Princeton and a master’s degree in economics from the London School of Economics. He lives in Berkeley, California with his wife and their three children.