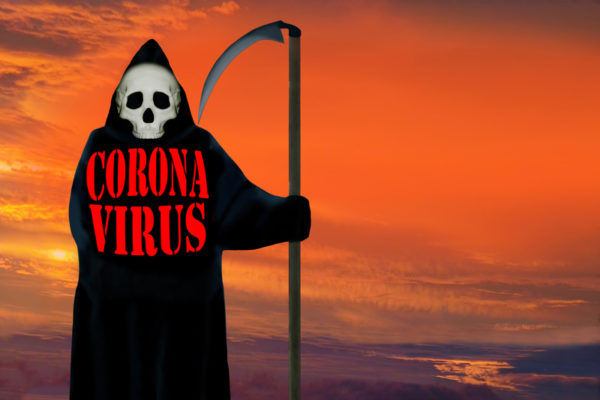 As of this writing, almost one million individuals have died world-wide from COVID-19, and over 200,000 in the U.S. None of these deserved to die. But then again, no one deserves death, with the possible exception of serial murderers and child molesters.

But there are some things that COVID-19 should kill, as they are quite deserving of a linguistic and philosophical death. These are the hackneyed and hollow shibboleths I’ve heard repeatedly over the years in the face of tragedy and misfortune. Often meant to bring comfort, they actually serve no purpose other than to parrot pious platitudes that wither and wilt in the presence of something as devastating and destructive as COVID-19. What are some of these sayings that are deserving of death?

Everything happens for a reason.

This implies that there is something or someone outside of our lives and world, controlling what happens, and while it may not make sense at the time and on the surface, there is an underlying reason for everything that happens. This is meant to assure and implies that there is some order in the world. To think otherwise is to allow for randomness and chance to govern our existence, and that worldview is too scary for some to embrace. If things happen for no reason at all, and if anything, good or bad, can happen to me, then I am existentially vulnerable, walking on a cosmic tightrope with no safety net below.

Still, some people find it reassuring to think that there really are no accidents, that what happens to us, including the most terrible of events, reflects an unfolding plan. But Richard Dawkins has written that the universe exhibits “precisely the properties we should expect if there is, at bottom, no design, no purpose, no evil, and no good, nothing but blind, pitiless indifference.” COVID-19 is Exhibit A in Dawkins’ argument, and it should be the first nail in the coffin of “Everything happens for a reason.”

God Has a Plan for Your Life

This is the first cousin of “everything happens for a reason.” It is sometimes called “the will of God,” which leads some on a lifelong theological wild-goose chase to discover God’s will for their lives. The premise of this notion is that God has a blueprint for every human life but has, for some unknown reason, kept these blueprints hidden. It is up to the believer to divine (pun intended) this plan throughout life. So God’s will includes things like whom to date, whom to marry, where to go to college, what vocation to choose, etc.

The problems with this worldview of discovering God’s will or plan for one’s life are legion. First, it is mostly a western notion that won’t find an audience in third world countries where disease, poverty, war, and hunger are the norm and not the exception. Second, this notion, like many of its theological relatives, lacks any means of validation other than intuition or belief, which makes the pursuit of God’s will utterly and necessarily futile.

Beyond these two problems lies an even greater threat to this popular religious notion: what kind of God has a plan that includes a virus so viscous and deadly, and whose victims suffer unimaginable pain and die alone? What kind of God wills, or even allows, something like COVID-19 to spread unabated to over 31 million innocent humans and to kill almost one million of those infected? Is COVID-19 God’s Gold Plan? Silver? Bronze?

COVID-19, in one fell swoop, destroys the notion of God’s plan or will, and amplifies the age-old problem of theodicy, a term the German philosopher Leibniz coined to refer to systematic attempts to defend belief in an omnipotent and omnibenevolent God in the face of evil and suffering. Sam Harris sums it succinctly: “If God exists, either He can do nothing to stop the most egregious calamities, or He does not care to. God, therefore, is either impotent or evil.” And if COVID-19 is part and parcel of God’s will or plan for even one life, let alone one million, we should start looking for a different plan and perhaps a different God.

It was his time to go.

This platitude rings true for someone who has reached the age that actuaries calculate as a life span; however, it is unsettling, and odd, to think, let alone say, this if we’re talking about a child who dies or a parent who dies, leaving young children behind. A child dies of COVID-19 but it was “her time to go,” really?

The premise underlying this religious sentiment is that we are somehow created by a God who has an appointed time for each of us to live and, therefore, die. If it is “my time to die,” that implies that a God has, from the moment of my birth, predetermined that I will die on a certain day, at a certain hour and minute and, possibly, in a certain manner.

But what kind of God determines or preordains a pandemic as horrific as COVID-19? What kind of God decides that a child should die of this cruel virus? And let’s be clear: we can’t cherry-pick if we truly believe that at some point in time “it is our time to go.” The time and manner of our death is either predetermined or it isn’t. And if it is preordained, then God is utterly and ultimately responsible for every manner and instance of death, which places him squarely in the submicroscopic, infective agents which have killed almost 1 million innocent persons world-wide. And if this is true, this isn’t a God. This is a monster. And perhaps this monster should join the graveyard of those notions it has slain. Because that’s where monsters belong.

For 10 years, D.B. (David) Ramsey was a Baptist minister. He holds degrees from Wake Forest University, Duke University, and he was named a Fellow in Religion and Leadership Development at Princeton Theological Seminary. His sermons appeared frequently in national clergy journals and religious publications, and he has served on numerous civic and denominational boards. Ramsey is currently a principal with the world’s largest on-line retail and cloud technology company, and he lives in Greensboro, North Carolina. Speaking of God… We Don’t Know Sh*t is his first book.

Speaking of God… We Don’t Know Sh*t is now available in paperback and ebook formats wherever books are sold.