We have a winner in the contest for the biggest jerk of the decade ending the year 2020.

The biggest jerk of the decade is neither a politician nor a preacher nor a political pundit. The person isn’t even a celebrity.

This jerk is heading to prison because of what the person did. Yes, this person has a defense lawyer who is also a big jerk. More on him in a minute.

Now, without further ado, the Biggest Jerk of the Decade ending Year 2020 is … 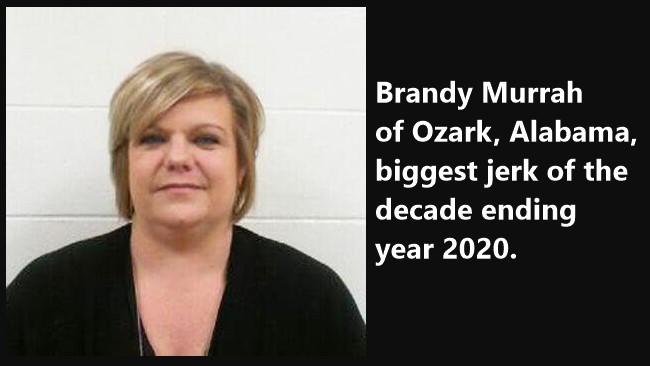 Why does Brandy Murrah deserve the title Biggest Jerk of the Decade ending Year 2020?

The answer is in this excerpt from a report published by the Southeast Sun:

“The more I prepare for this case, the more disgusted I am,” Thirty Third Judicial Circuit District Attorney Kirke Adams said after multiple people testified that Brandy Murrah “just didn’t care” while their children were taken from them due to drug test reports that Murrah falsified.

From the Dothan Eagle:

“… Judge William Filmore decided Murrah, the former owner of an Ozark lab test collection company, will spend 15 years in prison after hearing testimony from those who said she falsified lab reports that led to their children being taken away.”

From MEAWW.com: “Prosecutors say that due to Brandy Murrah’s actions multiple parents have lost custody of their children.”

Last week in court, Murrah’s attorney David Harrison had said that his client should be allowed to serve out her sentence in a community corrections program or on probation because of health issues which would cost the system money. “If she’s incarcerated, who does it help? At the end of the day, I understand this woman affected peoples’ lives, but she has pleaded guilty and it is a slap in the face to justice not to give her probation.”

A slap in the face to justice?

David Harrison needs to be on the receiving end of Robin Hood’s gauntlet.