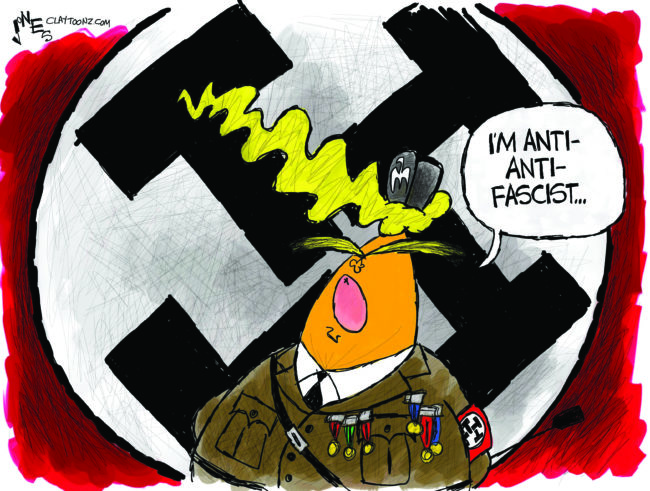 Other than voting and drawing political cartoons, I am not an activist. By that I mean, I don’t protest. I don’t sign petitions. I don’t write or call my congressman or senators (they’d call me first). I don’t contribute money to causes or political campaigns. I don’t plant signs in my front yard. I don’t put political bumper stickers on my car. So, to all those people sending me petitions and things through Facebook and Twitter messengers I “HAVE” to share…STOP! And while we’re on the subject, stop sending me memes and other political cartoons too. I just don’t need the aggravation, OK? But I digress.

I don’t participate because of the entire journalism ethics thing. I can draw cartoons opposing Trump but I can’t be part of a political organization opposing Trump. Being part of an organization makes me biased while attacking Trump. Being independent while attacking Trump makes me impartial. A lot of people don’t understand that and that’s OK, just so long as I do. Conservative cartoonists don’t understand it but they don’t do ethics anyway.

During the 2016 presidential campaign, I went to a Trump rally. I talked to a lot of Trump supporters. I did not protest. I didn’t wave a sign. I didn’t scream or even heckle. In fact, I didn’t even tell one Trump supporter my thoughts and opinions about Trump. I wasn’t there to tell them my opinion. I went to try to understand theirs. I failed because I still don’t understand it. But, I went to observe and learn. It was terrible and I needed a power washer to scrub the residual hate off me, but again, I digress.

So, I oppose Trump but I’m not in an organization. Am I part of a movement? Am I the Resistance? One reason among many that I oppose Trump is because I am anti-fascist. Donald Trump is a fascist wannabe. Does my opposition to Trump make me Antifa? I don’t know.

Yesterday, there was a demonstration from the far-right racist organization Proud Boys in Portland, Oregon. The founder of Proud Boys describes his group as a “fraternal organization” for young “Western chauvinist” men. Their rally was a so-called “End Domestic Terrorism” rally, but they weren’t there to end mass shootings by white guys with manifestos repeating Donald Trump’s rhetoric. Their goal was to get Antifa declared as a domestic terrorist organization.

While the founder disavowed the Unite the Right rally in Charlottesville where a white nationalist killed Heather Heyer and another was convicted for assaulting DeAndre Harris, Proud Boys were there participating with other racist organizations.

Yesterday, Representative Dan Crenshaw sent a tweet complaining that Antifa was violent while Hong Kong protesters were demanding freedom and actually fighting fascists. With the amount of violence and shutdowns of highways, businesses, and even the city’s international airport, maybe Crenshaw shouldn’t be comparing Antifa to the Hong Kong protests. Or course, it’s also possible that Crenshaw is doing the thing Republicans always do and that is talking about something that they don’t know anything about.

I wish Antifa wouldn’t engage in violence and vandalism. That will not create real change and only give stupid Republicans a false narrative to help deflect from racist organizations, the base of their support. Republicans are afraid to criticize racist.

Yesterday in Portland, 13 arrests were made and the mayor described it as “largely peaceful.” So much for that terrorist narrative. The majority of domestic terrorist attacks are committed by white racists, yet you don’t hear Republicans talking about any designations for them, if they even talk about them. Designating Antifa as a terrorist organization is a fascist move. It’s legally designating protest and dissent against Donald Trump as terror.

Personally, I’m more concerned about the movement that guns down people in churches, synagogues, mosques, schools, theaters, festivals, and retail stores than I am about the group that’s going to make it a bit more difficult for me to get my frozen mocha. And, I am intense about frozen mochas.

I am against fascism and I should be able to say that without the qualifier “but I’m against violence.” I draw cartoons opposing fascism. Does this make me the Resistance or Antifa? I will not allow fascist Republicans to designate my cartoons and free speech as a form of terrorism, but that’s where they’re trying to take us.

I will not fit into your narrative. When you scream against Antifa, you’re the one who needs the qualifier. While shouting against Antifa, you need to state you’re against fascism. If you don’t, from here on I’m just going to assume you’re a fascist…just like Donald Trump.