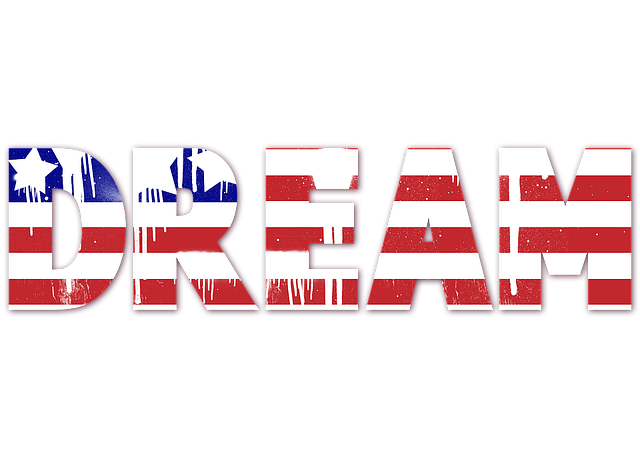 The phrase ‘American Dream’ was first used in a 1931 book by James Adams. In the book he states that American “life should be better and richer and fuller for everyone, with opportunity for each according to ability or achievement”. The American Dream idea is rooted in the experiences of the first European settlers in the 1600s, and the idea is formally promoted in the Declaration of Independence which proclaims that “all men are created equal” with the right to “life, liberty and the pursuit of happiness”.

The Dream is achieved through hard work, sacrifice and risk taking, rather than by circumstances of birth or social class designation.

However, the word ‘dream’ in the phrase implies that it is an ideal that is not fully achievable by everyone. Throughout our history there have been roadblocks to Dream fulfillment: slavery, legalized segregation, sizable economic disparities, and social class. As the United States has progressed as a democracy many of these roadblocks have been eliminated, but social class distinctions, and the economic disparities that go with the distinctions, remain.

Such phraseology says that some people will use their opportunities better than others, and therefore come closer to fulfilling the Dream. However, another implication of the Dream is that social class distinctions are fluid, with individuals easily moving from one social class to another. Although movement between social classes is easier in the United States than in many other countries, there are roadblocks here, especially for movement from lower to higher social classes.

One of these roadblocks is encapsulated in the current, narrower, version of the American Dream. This version says that Americans can only access the Dream by getting a 4-year college degree (and beyond) and attaining status in the professional class. This version essentially says that there are no other pathways to American success, which is both untrue and dangerous. Although there is a positive correlation between education and lifetime earnings, there are other pathways to economic security and wealth, such as entrepreneurship and careers in the trades.

Speaking of the trades, Labor Department statistics indicate that there are 6.4 million available unfilled jobs in the United States right now, many of them high-paying and in the trades and infrastructure maintenance. According to businesses these jobs are unfilled because applicants lack the skills to do the jobs. This skills gap is nothing new; American business have been complaining about the lack of skilled labor since the 1980s.

Observers point out that one reason the gap still exists is because our educational system is not providing young people with skills to do these jobs. Why? Perhaps the current version of the Dream is steering young people away from the trades, based on the erroneous assumption that a career in the trades or infrastructure will not lead to a middle class living.

Additionally, this version ignores a fundamental reality: All jobs and economic activity are based on functioning infrastructure, and the manufacturing, maintenance and upgrading of the infrastructure is done by the people in the trades and the working class in general. Without hem everything would fall apart and the economy would collapse.

Yet the current American Dream version says that these jobs should be avoided. Our President and political leaders need to speak out on this issue. They need to use facts to point out both the untruth and danger of the current version. By doing this perhaps they can help to overcome the negative attitude that many Americans have about what are traditionally called working class jobs.

Image by ShonEjai from Pixabay