You are here: Home / Bigotry / THE ALARMING ABSENCE OF OUTRAGE OVER ANTI-SEMITISM 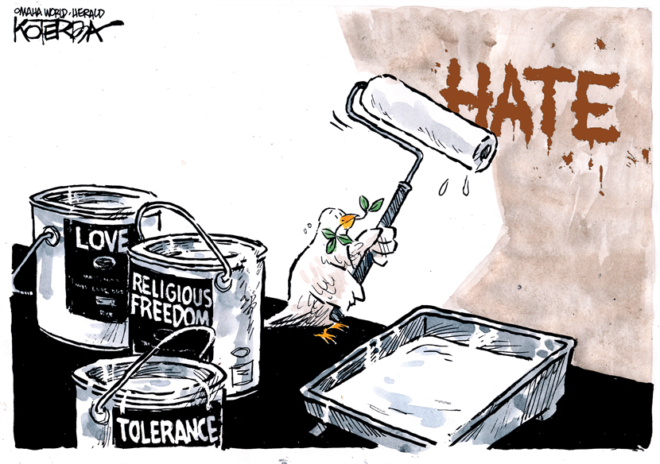 I’ve come up with a list of historical figures you want to avoid quoting in a public forum, at least outside of an academic context. Mind you, the list is neither official nor in numeric order. To name a few – Judas Iscariot, Marquis de Sade, Mussolini, Ted Bundy, Stalin and, of course, the Bohemian corporal himself, Adolph Hitler.

It’s difficult to justify a quote from Hitler. “He did some good things,” or “At least he was an animal lover” doesn’t quite cut it. He loved animals so much that he gave his beloved German Shepherd, Blondi, a cyanide capsule just to make sure the poison would work on his wife before the Red Army showed up.

Not that DeSean Jackson and his pal Stephen Jackson know much about Hitler, much less about his dog.

DeSean remains in the employ of the NFL’s Philadelphia Eagles. Stephen is a former NBA basketball player.

Last week, DeSean posted vile, anti-Semitic quotes attributed to Hitler (wrongly, as it turned out, though he didn’t know that) on his Instagram page.

“[The Jews] will extort America,” the post read in part. “Their plan for world domination won’t work…” There’s more but not worth the effort to type.

Enter Stephen, who took to social media to defend DeSean. Stephen posted, among other things, that DeSean was “speaking the truth” and “I don’t know nothing about Hitler and I could give a [expletive] about Hitler!”

DeSean apologized three times for the posts. Unfortunately, each subsequent apology seemed more insincere than the last. Stephen walked back his comments then bafflingly doubled down on them.

I have a suggestion for the Jacksons, especially Stephen. Schindler’s List is currently available on Netflix. Check it out. You’ll learn enough about Hitler and the Third Reich to feel compelled never to mention either again.

The Eagles, whose owner and general manager happen to be Jewish, called DeSean’s posts “appalling” and “offensive.” They announced that he will not be released but fined, though we don’t know how much. Whatever it is, he probably won’t miss it.

But instead of blowback and expressions of outrage over Jackson’s posts from his teammates, other NFL players, including those who plan to kneel during the national anthem, the sports world at large, the media punditry and the so-called “woke” movement, we’ve heard mostly crickets.

For non-football, fans, Jackson is not a nobody in professional football. He’s a prominent player in the NFL and has been one of the league’s top deep threats for a decade. You can’t blame the silence on a low profile.

One would think, especially in today’s environment, that attributing anti-Semitic vitriol to Hitler on your social media page would unleash a torrent of criticism, along with calls for your ouster and exile. Nope.

Help me understand, and we don’t even have to look beyond professional football.

The NFL’s Washington Redskins have finally capitulated to activist pressure and will change their name and logo. New Orleans Saints quarterback Drew Brees was lambasted by his own teammates for saying he didn’t agree with kneeling during the Star Spangled Banner. Brees eventually apologized, probably to avoid a team mutiny.

In the scope of history, the Holocaust didn’t happen that long ago. Survivors and their stories are still with us. Do we not owe it to them and the millions of others who were exterminated by the Nazis to condemn such hatred? What about the handful of Jewish players in the NFL, or Jewish fans?

And don’t misunderstand. I’m not advocating that DeSean Jackson be fired. I don’t know what’s in his heart and I believe in grace and forgiveness. At the very least, he certainly needs to be educated.

But the broader message here – the only one we can read from the reaction, or lack of, to the Jackson posts – is that only certain types of racism are worthy of our condemnation. You’d have to be willfully oblivious or just plain daft to see this any other way.

If we’re really serious about fighting racism in this country, politics and the ongoing temptation to find equivalency need to be extracted from the battle. If we believe that racism is an evil, a sin against man and God – as Martin Luther King did – then we can’t deem any kind of racism more or less acceptable than any other.

Copyright 2020 Rich Manieri, distributed by Cagle Cartoons newspaper syndicate. Rich Manieri is a Philadelphia-born journalist and author. He is currently a professor of journalism at Asbury University in Kentucky. You can reach him at [email protected]