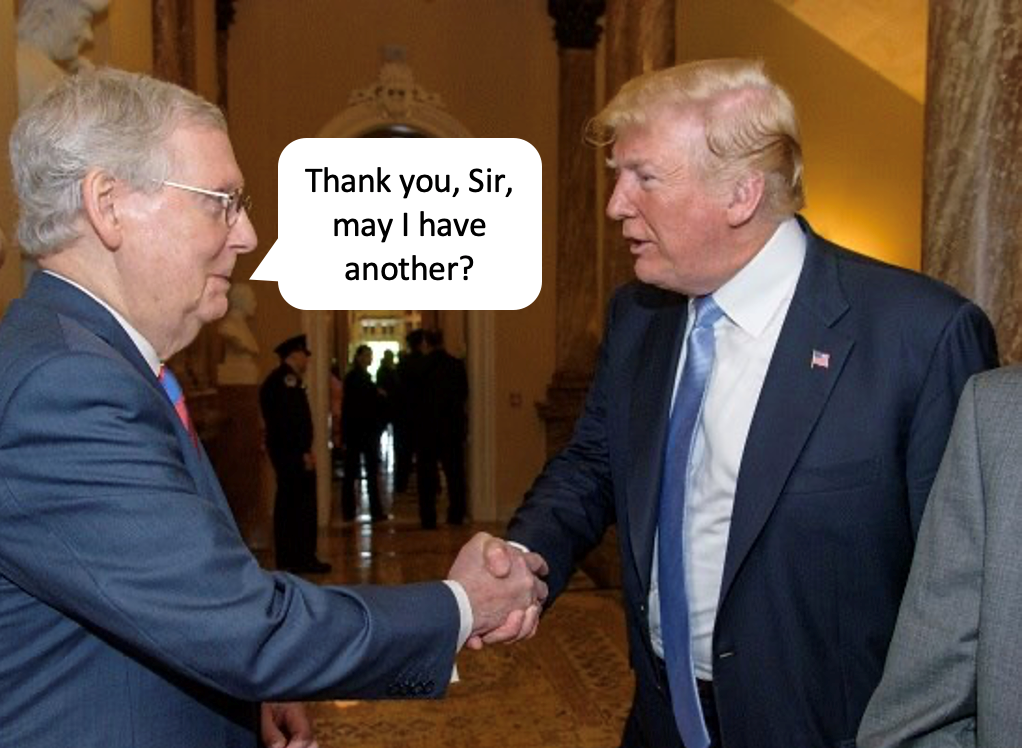 Going beyond “Thank you, Sir, may I have another,” and perhaps coincidentally, perhaps intentionally, perhaps obliviously, this morning the National Republican Senatorial Committee (NRSC) presented Trump with the inaugural Champion for Freedom Award.

It comes less than 48 hours after Trump launched an obscenities-laden attack on their Senate Minority Leader, Mitch McConnell, and on other Republican leaders.

There are several unusual things about this award. One is that there is no evidence the NRSC had any intention of giving it out before Trump attacked the party’s leader. The second is that Trump, who adores awards so much he sometimes invents them, did not even bother to put on a sport coat to receive this. The third is that the NRSC apparently plans to give it out every single year from now on.

A couple of days later, Trump lashed out at McConnell for betraying him.

McConnell’s silence was deafening. He might as well have kowtowed, “Please, sir, may I have some more please?”

On February 13, 2021, in an unusual moment of honesty and clarity, McConnell declared on the Senate floor that there was “no question — none — that President Trump [was] practically and morally responsible for provoking” the January 6 attack on the U.S. Capitol.

It is reported that advisers convinced Trump to leave out a line “re: the minority leader having an excess of ‘chins’ and a lack of brain cells.”

Less than a month later, McConnell, when asked if he would support Trump again were he to win the nomination, responded: “The nominee of the party? Absolutely.”

In other words, borrowing a famous line, “Please, sir, may I have some more please?”

Fast forward to April 10 when Trump, speaking to a Republican National Committee gathering at his Mar-a-Lago Club in Palm Beach, Fla., revisited his false claims that the election was stolen from him and excoriated Republicans who voted against him during his second impeachment.

But Trump saved his most vile insults for Mitch McConnell and even disparaged his wife, Elaine Chao, who served as Trump’s transportation secretary – often to cheers from Republican donors in the room.

Trump called McConnell a “dumb son of a bitch,” a “stone cold loser,” and falsely claimed that he, Trump, had won the Kentucky Senate election for McConnell.

As of Sunday evening, “A spokesman for McConnell could not immediately be reached.”

But if recent history is a prelude, we may once again witness the (in)famous scene from the 1978 Animal House replayed again.