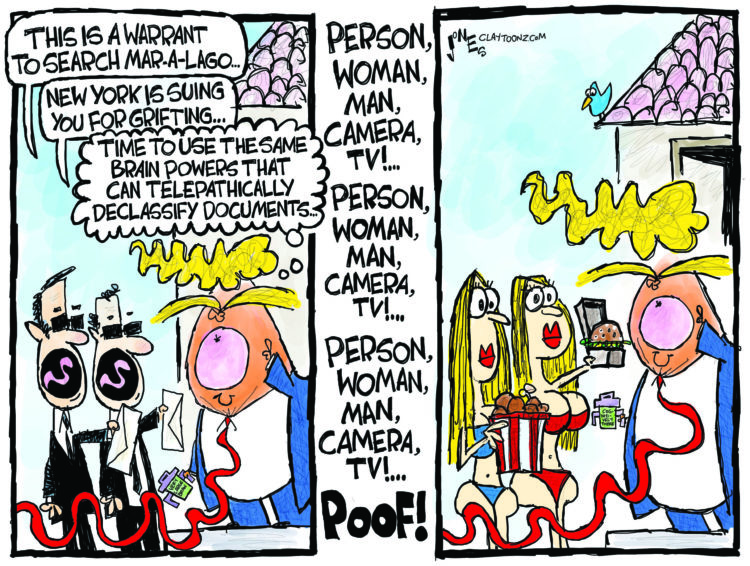 He’s also failed to prove he’s declassified them. The defense from him and his supporters has been that he can declassify a document by merely pointing at it and saying, “You’re declassified.” Kash Patel and others have argued without supporting evidence there was a policy that anything Trump took out of the Oval Office was immediately declassified. His former chief-of-staff says there wasn’t.

Trump’s own lawyers have balked at using the argument that everything was declassified. The Special Master they requested to review all the stolen documents appeared skeptical of Trump lawyers’ reluctance to say whether they believed the records had been declassified.

Trump lawyer James Trusty said, “In the case of someone who has been president of the United States, they have unfettered access along with unfettered declassification authority,” while failing to point out which if any of the documents have been declassified.

They argue that a president has absolute authority to declassify information. This is true, but there is a process to this other than just imagining it. Or is there?

Donald Trump seems to believe he can declassify a document just by thinking about it.

In an interview with pro-Trump goon and fake journalist Sean Hannity last night on Fox News, Trump said he could declassify documents “even by thinking about it.” Trump is claiming everything he took from the White House to Mar-a-Lago was declassified, though nobody else was aware of it. I guess that means he declassified everything in top secret with his mind.

That’s kinda like Trump blaming banks for not catching his grifting.

New York State is suing Trump and his three trust fund babies, Jr, Eric, and Ivanka, for manipulating property values to deceive lenders, insurance brokers, and tax officials. Donald Trump would often claim property was more valuable than it actually was in loan applications, then claim it was less in tax filing.

He said if there were discrepancies about his property values, the banks should have done more diligence. But maybe they would have if he didn’t use his amazing brain powers to hypnotize them.

Yes, Trump Tower is actually taller than it really is.

Yes, Mar-a-Lago is way more valuable than it seems.

No, those pants don’t make your butt look big.

Yes, every woman desires you.

Yes, they will let you do it if you’re famous.

Yes, Big Macs and KFC are essential parts of a healthy diet.

Yes, ketchup is a vegetable.

Yes, you are the most amazingest and bestest president ever.

Yes, nobody knew Lincoln was a Republican until you told them.

Yes, there were revolutionary airports.

Yes, you won the election but it was stolen from you by Never-Trumpers and ketchup haters.

No, Qanon is not a cult.

Yes, you’re still president and will be reinstated any day now.

Yes, you’re the best businessman ever and totally not a grifter.

No, I didn’t have my wallet with me when I entered the room.

Donald Trump wants us to believe he’s smart and has a brilliant mind. He’s really insecure about it which is why he keeps telling us he’s a “stable genius” and came up with “person, woman, man, camera, TV.” But the only people who fall for that crap are f—ing morons.