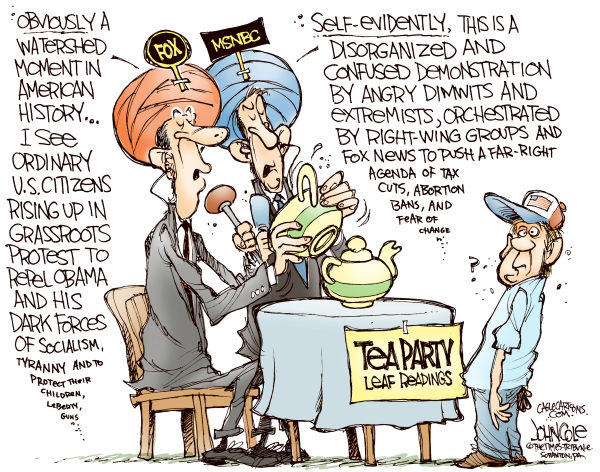 The debate is on. Were the “tea parties” held across the United States by conservative Republicans and some other political allies to protest the Obama administration’s “big government” policies big? Or are reported figures showing 250,000 or more highly inflated?

The bottom line: that argument will likely continue with partisans pushing their respective numbers-lines to help their party and hurt the other. But one thing about the protests: they showed the seeds of what could be a useful tool for the GOP.

By some estimates, over half a million Americans took to the streets last Wednesday to protest taxes and Washington spending – the largest single-day turnout of protesters in the US since 750,000 people marched in Los Angeles to protest foreign immigration on March 25, 2006.

Pitched as a non-partisan protest, but dominated by conservatives and libertarians, the national Tea Party protests took place in over 800 locales – from mega-city Atlanta to little Craig, Colo. – with people waving mostly homemade signs, chanting “USA! USA!” and recalling the spirit of the country’s revolutionary roots to demand smaller, more responsible and more constitutional government.

Critics doubt the higher estimates of the turnout, and say the numbers represent the extreme right rather than a burgeoning political counterpoint to President Obama and current Washington policies.

Yet the idea of non-traditional protesters using bottom-up organizing to foment a national movement in the span of 60 days may have marked a turning point for the tea partiers – especially since the high attendance estimates rivaled the estimated 500,000 or so protesters who converged on New York City and several other major cities to oppose the Iraq War on Feb. 15, 2003.

“I think it’s not dissimilar from what we had in 2003 with the anti-war protests, where a lot of people were uncomfortable with the war, but also uncomfortable with the anti-war position, recognizing there are terrorists out there,” says Jeremi Suri, a history professor who specializes in social movements at the University of Wisconsin in Madison. “Here we have a similar thing: There are serious economic issues, and it’s unclear to many people whether the stimulus is going to deal with these.”

Newsweek’s Howard Fineman sees the demonstrations of a kind of blueprint for the GOP:

The event I saw was a genuinely grassroots one, spawned on Facebook by a 23-year-old restaurant worker who managed to draw 1,000 folks on a blustery day. The speeches echoed the same apocalyptic themes the GOP will sound in the capital when Congress returns this week: that Obama and the Democrats are on a spending spree that will bankrupt the nation and rob us of all that’s left of our freedom.

But it wasn’t really a GOP event. Half the crowd was perennial Kentucky “aginners,” who oppose the federal government on general principle, who like Ron Paul and the NRA and who don’t like or trust either party on spending. Some others at the gathering praised Bill Clinton as a fiscal moderate. Kentucky Sen. Mitch McConnell, the GOP leader in the Senate, was not at the rally—and he didn’t sound as if he regretted it. Such events, he told me, “shouldn’t be totally pooh-poohed.” Key word: totally.

Tea parties, of course, will not revive the national party. So what will? There is no one-stop Republican inner council with all the answers. “When you’re in the minority like this, it is every man for himself,” says Charlie Black, a longtime consultant. But, essentially, this is what GOP strategy amounts to: focus on the mundane; play for time; look for ways to divide the Democrats’ large, and perhaps unwieldy, majority; wait for the president’s inevitable drop in the polls; and keep distant from Obama’s budget, spending and programming. If the GOP is regarded as the “Party of No,” so be it. If the economy improves markedly by fall 2010, Republicans aren’t going to get credit anyway. If the economy doesn’t improve, the president will get the blame. “If he does it by himself, he owns it,” says McConnell.

But look for more of these tea party protests no matter what happens in Washington. Fox News promoted (some critics say essentially ran and instigated) the tea party coverage and got whopping ratings. It’s clearly in the network’s interest to see more of them staged on key dates.

To be sure, the parties could well backfire by chasing away independent voters who already are turning thumbs down on the GOP. And some of the signs captured in photos in the new media and the old media would be offensive to those who aren’t Republicans. But another Tea Party Day is already slated: July 4th.

Cartoon by John Cole, The Scranton Times-Tribune. This cartoon is copyrighted and licensed to appear on TMV. . All Rights Reserved. Unauthorized reproduction prohibited.