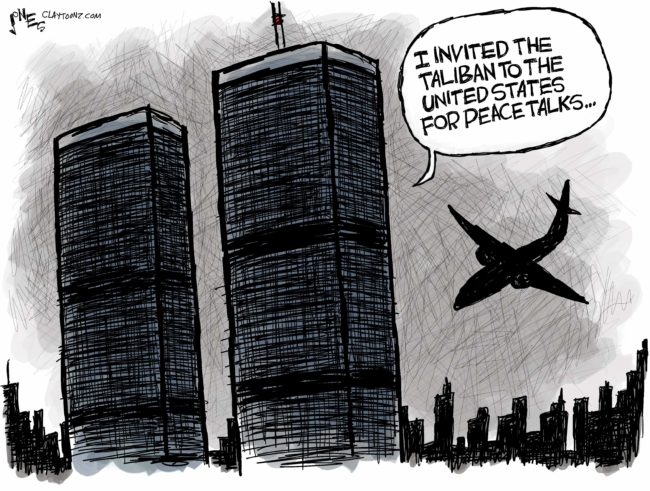 told several people, copy editors, people who watch my videos, and the girlfriend, that I was taking today off. I’m way too far ahead with my cartoons. Visit my work on GoComics and you’ll see the cartons are at least seven days behind this website (but the comments there are great). But after telling Amanda, the girlfriend, that I had an idea I really wanted to draw, she told me that I had to do it or it’d bother me all day. I hadn’t even told her the idea yet. After it was roughed out and I showed it to her, the reaction was a gritted teeth grimace. That’s when I knew I had to finish it.

Ronald Reagan said the United States does not negotiate with terrorists. The truth is, yes we do. Reagan’s own administration made illegal deals with terrorists and their sponsors. His administration even provided arms to Iran which I’m sure were never used against Israel. Despite this, Republicans continue to worship at his altar and demand their candidates live up to Reagan’s ideals, or at least they used to.

Yesterday, Donald Trump tweeted that he was canceling planned peace talks at Camp David with the Taliban and the president of Afghanistan over a car bombing in Kabul that killed one American and 11 others. Trump was trying to give the impression he was standing tough and refusing to negotiate with terrorists who have refused to stop committing violence.

The truth is, the United States has been in a yearlong negotiation with the Taliban and was near an agreement that would see a beginning to U.S. troops being pulled out of Afghanistan, yet the terrorist organization has never promised to stop fighting during negotiations. Americans have been killed by the Taliban during these talks before the Kabul car bombing.

So, why the Trump cancelation? The truth is, the Taliban has been balking at how the deal would be finalized and announced. It didn’t seem that talks at Camp David were going to work out, so Trump was trying to get ahead. Also, it may not have played well hosting the Taliban on U.S. soil mere days before the anniversary of the September 11, 2001 attack by al Qaida. Remember, the Taliban was the government in charge that allowed al Qaida to operate on their soil and refused to give them up after their attack on the U.S.

Donald Trump, who loves photo ops that illustrate his supposed great negotiating skills would have been seen mugging for the camera with terrorists on 9/11.

Was it a negotiating strategy for Trump to cancel the talks and expose a secret through a tweet? Or, was it Trump being an idiot once again?

There does need to be a peace agreement with the Taliban. There is no need to accommodate them on U.S soil to do this. In fact, the Taliban wasn’t eager to come to the U.S. For some reason, they don’t trust Donald Trump.

Unfortunately, any deal made by Donald Trump will undoubtedly favor the Taliban.