Posted on September 5, 2022
You are here: Home / Featured / Sure sounds like a coup attempt: draft Trump executive order called for seizing voting machines after 2020 election 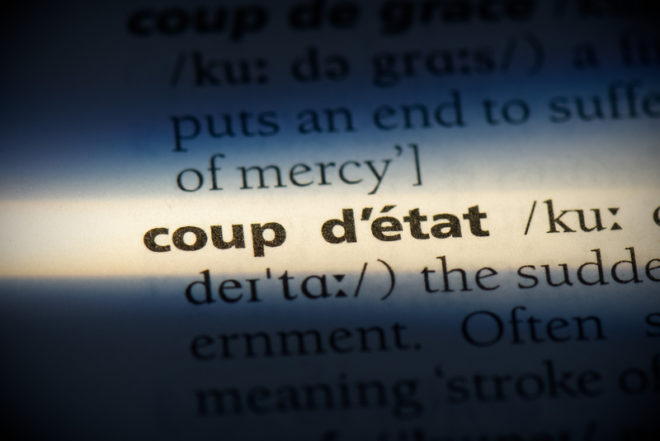 As the drip-drip-drip details about Donald Trump and his political associates’ efforts to overturn the 2020 election seem poised to become a tsunami, Politico reports details on a Trump-era draft agreement that would have had the Secretary of State seize voting machines and appoint a special prosecutor:

Among the records that Donald Trump’s lawyers tried to shield from Jan. 6 investigators are a draft executive order that would have directed the defense secretary to seize voting machines and a document titled “Remarks on National Healing.”

POLITICO has reviewed both documents. The text of the draft executive order is published here for the first time.

The executive order — which also would have appointed a special counsel to probe the 2020 election — was never issued, and the remarks were never delivered. Together, the two documents point to the wildly divergent perspectives of White House advisers and allies during Trump’s frenetic final weeks in office.

It’s not clear who wrote either document. But the draft executive order is dated Dec. 16, 2020, and is consistent with proposals that lawyer Sidney Powell made to the then-president. On Dec. 18, 2020, Powell, former Trump national security adviser Michael Flynn, former Trump administration lawyer Emily Newman, and former Overstock.com CEO Patrick Byrne met with Trump in the Oval Office.

In that meeting, Powell urged Trump to seize voting machines and to appointher as a special counsel to investigate the election, according to Axios.

A spokesperson for the House’s Jan. 6 select committee confirmed earlier Friday that the panel had received the last of the documents that Trump’s lawyers tried to keep under wraps and later declined to comment for this story on these two documents.

The draft executive order shows that the weeks between Election Day and the Capitol attack could have been even more chaotic than they were. It credulously cites conspiracy theories about election fraud in Georgia and Michigan, as well as debunked notions about Dominion voting machines.

The order empowers the defense secretary to “seize, collect, retain and analyze all machines, equipment, electronically stored information, and material records required for retention under” a U.S. law that relates to preservation of election records. It also cites a lawsuit filed in 2017 against Georgia Secretary of State Brad Raffensperger.

Additionally, the draft order would have given the defense secretary 60 days to write an assessment of the 2020 election. That suggests it could have been a gambit to keep Trump in power until at least mid-February of 2021.

Read the article in full here. It contains the full text of the never-issued executive order.

Expect more revelations now that the House January 6 committee has received documents from the National Archieves that Trump tried to prevent it from getting. The Washington Post has “Democracy dies in darkness” at the top of its website. Democracy can also die in broad daylight.

We were one Executive Order away from an actual coup. https://t.co/btnzBvjBWc

Here is the order prepared for Donald Trump's signature in December 2020 that would have directed the Secretary of Defense to utilize the National Guard to seize voting machines and information- just published by @woodruffbets. Author is unclear. https://t.co/knyOJ6qowI pic.twitter.com/5FyQTqP9pf

Trump’s draft order of December 16, 2020, asks for “final assessment” no later than sixty days after voting machines were seized under this document by the Pentagon.
Does this suggest that Trump expected to be remaining in power as late as February 2021?

It's hard to overstate what a historic document this is. Ultimately, it was never implemented, but someone authored it, and there's lots of evidence it this was seriously considered by Trump and the people with whom he kept counsel, even after Jan. 6.https://t.co/RDrYvXkLZC

The Trump draft order to seize all the voting machines is nuts, the fact it went so far as to be typed-up makes me wonder how Jared Kushner is escaping scrutiny re: Jan 6th Cmte. No way were Rudy & Sidney Powell doing this without Kush’s approval. J was campaign shot-caller.

Trump: I tried to steal the last election and I'm running again to do the same. Here it is in writing

Biden: Trump just told us in his own words that he's going to steal the next election, let's do something about it

Media: Why do both sides cast doubt on our elections? https://t.co/QjFslOTwvS

From pg 3 of the draft executive order that would have seen the military confiscate every voting machine in the country. Does anyone really think Trump would have said "her" if he didn't already have a Special Counsel in mind? Who wants to bet it was Sidney Powell? pic.twitter.com/LphY6VrunB

If you have any doubt whatsoever that there was a plan to undermine our democracy and our constitutional system, read this draft executive order.

We need to know *everyone* involved in this scheme. None of them should ever hold any public office again. https://t.co/FI10bK4EMS

Plotting to “seize” “all” voting machines, a real coup by the Secretary of Defense, the DNI, and a “special counsel” (likely Sidney Powell). pic.twitter.com/t49JfN5Cwt

Given today's breaking news about a seditious Draft Executive Order Trump had in hand within 48 hours of then-AG Barr's resignation, it's pretty clear Barr resigned because he knew a coup was being plotted. The House January 6 Committee needs him under oath ASAP. RT if you agree.

While it's important to fix the Electoral Count Act and strengthen other electoral guardrails, the draft order authorizing DOD to seize voting machines is a good reminder that we still have a huge problem if we have a president & senior officials ready and willing to usurp power.

FOR MORE COMMENTS ON THIS BREAKING NEWS STORY GO HERE.