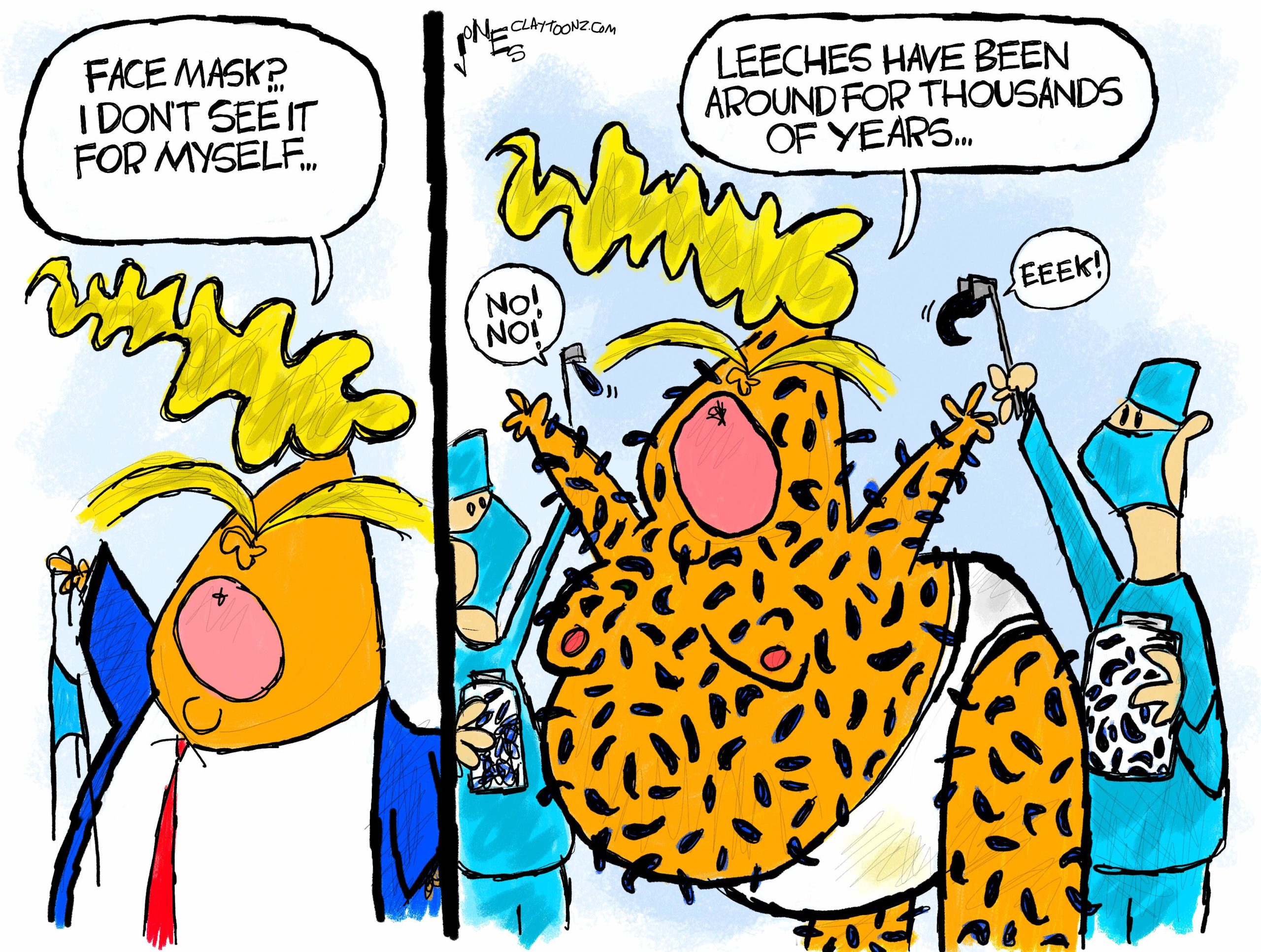 So when Donald Trump boasts about taking Hydroxychloroquine, a drug most medical professionals say doesn’t help fight Covid-19 at all and is probably more harm than good, he’s prescribing it. That’s dangerous. It’s reckless. I’ve said it before and Donald Trump proved it yesterday: Donald Trump does not care about you.

There’s much speculation as to why Donald Trump is taking the medication…and why he’s telling us. From liberals I’ve talked to, the thought is he’s making money off this and he knows his cult will try to take it too…if they can get a doctor to prescribe it. For others, they believe it’s a distraction from things like over 90,000 people dying from coronavirus, the firing of Inspectors General, and the Attorney General (who usually doesn’t have any problem carrying Donald Trump’s water) refusing to go after President Obama because EVEN William Barr sees it as overly political and illegal. I don’t think any of those reasons are why Donald Trump is taking it and boasting about it. The only reason Donald Trump is taking hydroxychloroquine is that he wants to stick it in the face of liberals, Democrats, and the media.

When making the announcement, Trump said he couldn’t wait to see the media’s faces. When asked why would he take a drug that doesn’t work and could hurt him, he said, “Here we go, you ready? Here’s my evidence. I get a lot of positive calls about it. The only negative I’ve heard was the study where they gave it — was it the VA with, you know, people that aren’t big Trump fans gave it.”

Wait. The only negatives he’s heard about it are from people who aren’t “big Trump fans?” So now, not only has the pandemic, reopening, and science been partisan and political, so is the treatment.” Donald Trump believes the treatment is all about Donald Trump.

Donald Trump has stood next to Dr. Anthony Fauci, the leading virus expert in the nation, while the doctor was expressing his opinion that you should NOT take this medication. Yesterday, Donald Trump said he’s taking it because he heard a doctor he doesn’t know say good things about it. Donald Trump is not a doctor but he has played a dumbass on television.

This is like ignoring medical advice given to you personally by Dr. Anthony Fauci in favor of sticking your penis in a meat grinder because a Facebook meme told you it works.

This begs other questions: Is Mike Pence taking it? And…did Donald Trump actually get this prescribed? We know the answer to the second question. It’s yes. Donald Trump said he brought it up to the White House doctor and the doctor went ahead and gave it to him. He’s been on the stuff for the past ten days which may explain the mood swings and shouting at female reporters during that time. We’re still unsure what caused all the mood swings and shouting at female reporters before that time.

So, Trump says, “Hey, Doc. I wanna take some shit I heard some good things about from 4chan.” And the doctor says, “OK.” I’ve always heard of patients asking doctors about a medication they heard about from some crazy source, like from watching Hannity, and the doctor shooting the patient’s idea down. Of course, most patients aren’t the president (sic) of the United States. At first, I thought, maybe the doctor told Trump he’s doing what he wants, but all the pills are shaped like Bam-Bam. But no. The doc issued a statement that they weighed the negatives and they’re giving the stuff to Trump to prevent him from catching Covid-19.

According to the White House, Donald Trump does not have Covid-19…but there’s never been any evidence, none, zilch, nada, that taking Hydroxychlorquine prevents you from catching it. we’re not even talking about fighting the virus after catching it. We’re talking about it being a preventative measure. He may as well be taking Zicam.

There are serious dangers of this drug, like “life-threatening heart rhythm problems.” The side effects include “crazy dreams” and mood swings. Could Donald Trump have a physician lie for him? I mean, could the 248 pounds, six foot three Donald Trump have a physician lie for him? Donald Trump is about to turn 74-years-old. He’s a big guy. He’s probably on other medications. He has a history of heart disease. He only eats fast food. The only vegetable he consumes is ketchup. And…he’s fat. He is so fat. Last night while talking to CNN’s Anderson Cooper, House Speaker Nancy Pelosi called him “morbidly obese.” I can NOT wait for Donald Trump to reply to that and use the defense that doctors only describe him as “clinically” obese.

I told you the different theories liberals have as to why Donald Trump is taking this. My theory is to stick it in the face of the media, liberals, and Democrats. Conservatives and Trump shitweasels agree with me. Last night, I looked on a few MAGAt social media pages and they were all with the belief that Donald Trump is taking it, while believing the medication works, just to piss off liberals. As one put it, “The media is afraid Trump’s going to prove it works.”

The greatest danger of Donald Trump taking a medication promoted by quacks and conspiracy theorists is that it will harm his supporters. People have already died from taking this quack’s medical advice. His supporters already argue against wearing masks and some believe it’s a deep-state method of controlling them.

So, kids. If you’re arguing, believing, and/or taking a specific medication because Donald Trump told you it works, in defiance of the FDA, the CDC, the Veterans Affairs Administration, and the World Health Organization, congratulations. You are now officially in a cult. You’re following an orange Jim Jones. You may as well be a Branch Davidian. You are drinking the Kool-Aid.

Donald Trump has given some very bad medical advice. He said people go to work and recover from the coronavirus. He says he’ll continue to shake hands. He refuses to wear a mask because he doesn’t “see it for himself.” He threw out the idea of drinking bleach. But, he will take some quack medication that could make his obese heart collapse.