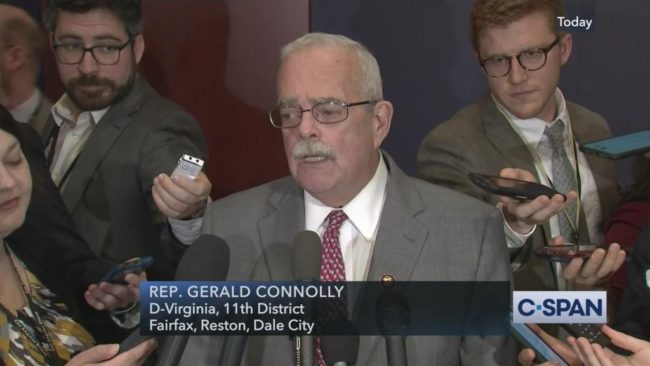 Not just Democrats, Sen. Mike Lee of Utah said what Trump officials presented was “the worst briefing I’ve had on a military issue in my nine years” serving in the Senate.

Congressional Democrats emerged from a classified briefing presented by Trump administration officials on Wednesday afternoon and decried the “sophomoric and utterly unconvincing” body of evidence that was put forth to justify last week’s assassination of Iranian military commander Qasem Soleimani.

Sen. Chris Murphy (D-Conn.) reacted to the briefing by saying that rather than showing Soleimani posed an “imminent” threat as President Donald Trump and his top officials have repeatedly claimed, the military operation—based on the evidence presented—appears to be nothing more than a “strike of choice” by the administration.

“I was deeply surprised at the lack of information presented by the administration regarding a specific imminent threat,” Murphy told reporters. “We did not get information inside that briefing that there was specific, imminent threat that we were halting by conducting that operation.”

Murphy said that not being shown more substantial and convincing evidence was both surprising and saddening, but added, “I think it is likely because it doesn’t exist.”

"I was deeply surprised at the lack of information presented by the administration regarding a specific imminent threat," Sen. Murphy says after briefing on intel behind U.S. strike killing Soleimani.

"… I think it is likely because it doesn't exist." https://t.co/qzNUfPV1bP pic.twitter.com/muaoHE9pqt

Rep. Gerry Connolly (D-Va.), a member of the House Committee on Foreign Affairs, told reporters the briefing “was sophomoric and utterly unconvincing.”

Connolly said he was “unpersuaded about any evidence about the imminence of a threat that was new or compelling.”

Disgust with the presented case did not only come from Democrats. Sen. Mike Lee (R-Utah), standing beside an equally unconvinced Sen. Rand Paul (R-Ky.), told reporters after the closed-door session that it was “the worst briefing I’ve had on a military issue in my nine years” serving in the Senate.

“I find this insulting and demeaning,” Lee added, telling reporters that he now plans to vote in favor of a War Powers Resolution put forth by Sen. Tim Kaine (D-Va.)