Posted on October 9, 2021
You are here: Home / Arts & Entertainment / Cartoons / STAB BACK BETTER (Cartoon and Column) 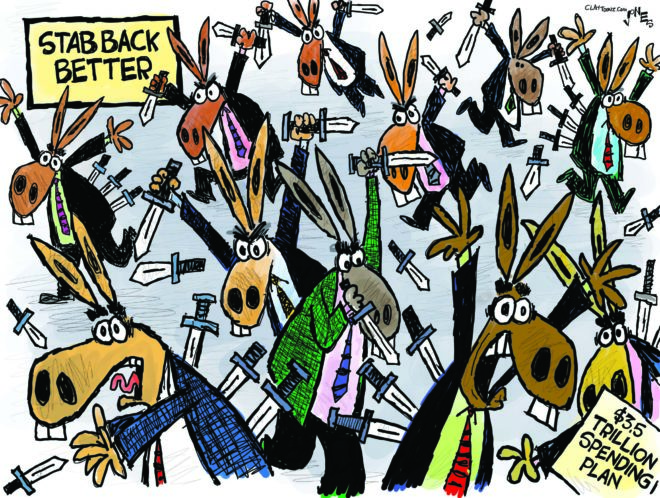 President Joe Biden’s agenda is ambitious. In fact, his Build Back Better Act is historic. It doesn’t just take the country into a more liberal direction. He’s trying to take the nation into a progressive one. And I don’t mean progressive as in liberal, I mean progressive as in progress. He’s trying to move the nation forward. Actually, improving this nation and looking toward the future is liberal, like facts and science. Hey, we didn’t make those things liberal. Republicans did.

This $3.5 trillion spending plan invests in green technology. That’s sensible…which has become liberal. Fossil fuels will not last forever. And here’s a fun fact: We are not going to be here forever. How about we leave something for the coming generations? Burning the planet down now for political expediency and profit is selfish.

This spending plan includes universal pre-K, paid family leave, price controls on prescription drugs, a child allowance, and at-home care for the elderly. It increases taxes (not enough) on the rich. And, it cuts taxes for the bottom 90 percent. Republicans won’t tell you that. In fact, Republicans are saying he’s increasing everyone’s taxes while also banning cheeseburgers. This is because Republicans lie.

The Build Back Better Act is divided into three parts. The first, The American Rescue Plan, has already been passed. What, you didn’t know that? You should because you cashed your check. The first part was a $1.9 trillion COVID relief package. Biden’s approval is currently at 43 percent which proves we forget shit quickly.

The next part is the American Jobs Plan, but that’s being pushed aside, even with a Senate compromise having been reached, because Democrats in the House want to pass the American Families Plan first.

This is wonky stuff and a lot of it’s hard to understand. I’m not including all of it because, dammit, it’s hard and I want to go outside and play. But, I did do a lot of reading for you, so buckle up and let’s go.

Two environmental groups released a study saying this plan will generate 7.7 million jobs over the next decade in clean energy, create $907 billion in economic growth, and provide over $154 billion in tax revenue to local and state governments. That’s liberal and conservative. It’s saving the planet and increasing revenue for the government which may balance budgets and never mind. Republicans don’t actually care about increasing government revenue and balancing budgets, so this part is all liberal. Republicans would rather go all Thanos and snap fingers and destroy shit.

The $3.5 trillion won’t be spent in one night, or even in one year. You don’t hear this part a lot, do you? It’ll be spent over the next decade and only accounts to a five percent increase in the federal budget. You probably weren’t told that part either. But, this bill isn’t going to make it intact to Biden’s desk for his signature. It’ll probably be a trillion cheaper. That means we get less stuff. This is thanks to assholes.

The blocks to passing this don’t just include Senators Joe Manchin and Kyrsten Sinema. There are at least a dozen House Democrats in the way. They objected to President Biden’s proposal to raise the top tax rate on capital gains to 39.6 percent. They also refused to close loopholes that allow hedge-fund managers to pay less in taxes than teachers. These are Democrats? Trust me on this: None of these rich people will be sent to the poor house over this. They pay people to figure out how they can get out of paying higher taxes. They’ll just have pretend poor houses.

The same Democrats who are obstructing this bill have removed a provision that would allow Medicare to negotiate prescription drug prices, something that even 77 percent of Republicans support. Hell, Donald Trump even pretended to support it for a minute. How does anyone run and get elected on making prescription drugs more expensive?

Seventeen Nobel Prize winners in economics have come out in support of the $3.5 trillion package. They think it’s a great idea to help pay for it by increasing taxes on the rich by $2.9 trillion.

Joe Manchin, being the buzz-killing wet sponge that he is, is blocking passage of this unless it’s scraped down to $1.5 trillion. Kyrsten Sinema is also refusing on the price. Why are they Democrats if they don’t want to tax the rich? Let’s look at some of the good stuff they’re preventing with their obstruction.

They are stopping an annual tax credit of $3,600 for every child under 6 and $3,000 for every child age 6-18, half of it paid in advance to assist low-income families. And unlike tax cuts for billionaire assholes, these tax credits will expire in a decade.

They’re stopping the largest anti-poverty program in a half century that is likely to reduce child poverty in the United States by 40 percent-50 percent. Maybe someone should tell West Virginia Senator Joe Manchin which states have the most poverty. Twelve of the top 13 states in poverty are red states. Go figure.

They’re stopping two years of Universal Pre-K for 3- and 4-year-old children, a program that will serve five million children. They’re stopping feeding these children. Free child care puts more women into the workforce. This fact is so factual, you don’t even need a study to prove. It’s like Trump and a small penis. You don’t need to see it to know it.

They’re stopping free tuition for all students at community colleges. Free tuition will increase enrollment in community colleges by 26 percent, and graduation by 20 percent, which Republicans don’t like because educated people don’t vote for racist morons. Look at those poverty red states. You would think that being in poverty would make a person stop voting for politicians who give bailouts to rich assholes and assholes who give themselves bailouts, but they’re uneducated. I’m a huge fan of free community college.

They’re stopping dental, vision, and hearing benefits to Medicare recipients. I ask again, how do you campaign and elected by hating on Medicare? At least Republicans are quiet about it while taking money from it to give to the rich and build racist border walls.

They’re stopping twelve weeks of paid family and medical leave for working men and women. Think of paid-family leave as bailouts for businesses, because that’s who’s benefitting the most from this. Maybe every Republican in Congress should go back to community college for two years.

They’re stopping a plan that cuts carbon emissions in half within a decade through alternative energy and electric vehicle tax credits; a methane gas fee; funds for rural electricity corporations and agriculture and forestry carbon capture initiatives; payments to utilities that substantially reduce greenhouse gas-emitting electricity sources; and electrification of federal government vehicles and buildings.

Again, to help pay for this, President Biden and AOC’s dress are proposing tax hikes on the rich and corporations. This plan, if it remains intact, will increase capital gains taxes from 20 percent to 25 percent, less than they were between 1945 and 2017. It will define the top bracket as $450,000 for joint filers (your taxes are NOT increasing. Rich people don’t read this blog). It will reduce the exemption for estates to $6,020,000; impose a 26.5 percent tax on corporate income over $5 million; and increase the top bracket personal income tax rate to the pre-2017 rate of 39.6 percent. Does that sound like your taxes are being raised?

Why does Joe Manchin and Kyrsten Sinema want you to continue to pay more taxes than Amazon? Last year, Amazon paid a tax rate of 1.2 percent. What rate were you taxed? In 2018, Amazon had profits of 11 billion, yet paid…wait for it…zero in federal taxes. How much did you pay in 2018? Why does Manchin and Sinema want this to continue?

Biden’s plan would raise about $2.1 trillion in revenues between 2022 and 2031 (the period covered by Build Back Better). Experts say tax credits will boost the income of the bottom quintile of income earners by 14.5 percent in 2022; the top one percent will experience a five percent decline in after-tax income.

And yes, I copied and pasted a lot of that. You think I know what “quintile” means? I just looked it up. I still don’t know what it means.

No Republican in Congress supports this plan but three out of four Americans do. Unfortunately, there are too many Democrats in Congress who don’t.

Joe Biden has spent his first year in his presidency advancing legislation that will actually benefit Americans. By comparison, Donald Trump’s first major legislative act was to give himself a tax cut.