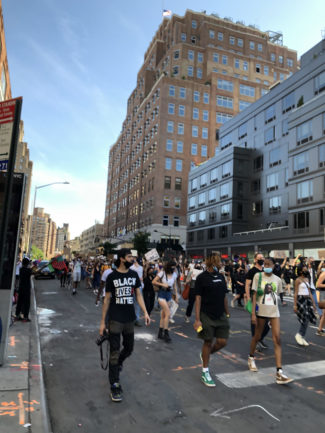 The incredibly misguided 1619 Project and the new religious movement of “wokeism” has finally jumped the shark. Yes, fellow liberals: we have our own deplorables now.

The whole “White Fragility” nonsense has its own original sin, its saints (St. Di Angelo, St. Kendi, St. T.-N. Coates and other grievance grifters), its own dogma, its metaphoric witch burning, twitter pile-ons and career cancellations of the “problematic”.

Outraged? Keep reading and try cancelling me. Go ahead: my editors always defend me.

Let’s have a chat…. and take a trip. We’ll see about this current idea that Anglosphere democracies, including ours, are “the most racist societies on earth” – in the words of a protester I button-holed lately for an article, words which summarized a very common theme in the twitterverse and increasingly large parts of the media and academia.

“Most racist” compared to what? And when?

For comparison’s sake let’s travel around the world, shall we?
We’ll leave America and fly west. First we touch down in the beautiful Pacific Isles where there are routine burn-downs of ethnic Chinese business areas – and at times panicked international evacuations – from Papua New Guinea to Vanuatu to the Solomon Islands to Tonga to Fiji with its periodic, racially based coup de etats.

North to the People’s Republic where we can chat with African students and traders there about their knife edge lives trying to eke out a living while being called monkeys, getting their hair felt up and having stones thrown at them. Next stop: Cambodia where in living memory the Chams (Muslim Khmers) and ethnic Vietnamese were exterminated almost to the last person by the earlier Cambodian iteration of “woke”: the Khmer Rouge. Their ideologies are similar: like the K.R. our current B.L.M. are opposed to the nuclear family and capitalism.

We’re in South-East Asia where a racial minority of ethnic Chinese who emigrated there hundreds of years ago are treated unkindly to say the least: “The Jews of S.E. Asia” is the metaphor we need here as their plight echoes the earlier European Jewish experience.

In Thailand by law ethnic Chinese must “Thai-ify” their names, in Malaysia they are denied equal higher education, employment and various rights in favor of the local, Muslim “Bumiputra” Malays. In Vietnam when the communists “won” the war the Chinese minority just left in boats, often floating as far as Australia rather than face the racist wrath of the locals. Many “Vietnamese” and “Laotians” you meet in the US are actually ethnic Chinese who fled this horror in the 1970s. Now that’s some racism! It makes Starbucks’ toilet discrimination look tame.

West again – our plane departs for Burma where there is a current, active genocide of Rohinga Muslims, a racially distinct people from the “Biman” majority. Sri Lanka hosts a Hindu vs. Buddhist grudge match and a decades long war recently tore that country apart. North to India we visit a country on a constant knife edge of all kinds of division. Race is central to all this.

Landing in the Republic of South Africa we’ll have tea with some South Asian and Central African businesspeople. You might have met some at the airport on their way out in a hurry last year as they fled South Africa in terror, businesses abandoned and burned by roving racist mobs.

Stay with me here as it is a long trip and we don’t have 80 days. North a little to Rwanda (interestingly and relevantly the most Catholic country in Africa) where a racism inspired genocide killed a tad under a million people in 1994, mainly with machetes. It puts college “microaggressions” into deep relief, doesn’t it? Also in living memory “Asians” (Indian Gujaratis mainly) were expelled overnight from next door Uganda for the crimes of being both good business people and not being locals.

We head North again to the wealthy Persian Gulf where a subclass of South Asian and Philipino “hired help” coolies do the hard, hot, dangerous work with few to no rights, safety regulations and no chance of a shot at the lucrative citizenships of the Emirates, Saudi Arabia, or Kuwait, even after decades.

Next on Aeroflot we fly up to Russia – which many people don’t know is a huge net-positive immigration destination – and where the marginal lives of former Soviet republic citizens working there are grim indeed. For example, Kirgizia is demographically hollowed out of men: they’re all on Russian construction sites, paid little and treated like garbage because of their race and religion. No “Kirgiz Lives Matter” marches in Moscow.

Note our travels missed the largest open air mental hospital on earth: the “Holy Land” where Iron Age fairy tales and race will have the locals killing each other for the length of our and your great grandchildren’s lives.

Back to Europe. Poland is ready to forgo billions in EU funding to keep Muslims, Arabs and Africans out, contrary to EU policy. Don’t even start me on Hungarian racism.

The UK voted for Brexit. Zip across the Channel and let’s visit the “Banlieues” slums of Paris and see how the Algerians and Moroccans get on there, how welcome they feel in France. Ask them. Or former empire citizens of Portugal who are black (from Mozambique, Angola, etc.) in Lisbon. Or the “eggplant” (mulignan) Africans working the fields of Italy. If we cross the Atlantic to Brazil the demographics and wealth there are distributed like a wedding cake with a white elite icing, a coffee colored skin tone mix below them and a large black underclass below them.

Before you excoriate me below in the comments as a conservative, don’t: my lefty-liberal bonafides are bulletproof. I donated to, volunteered and worked for the Hillary campaign, I (also) write for far left Counterpunch and previously was a cheap defense attorney for impoverished minorities in the courtrooms of Queens and Manhattan. I’m no Fox News sucker, Jack!

No sane person is saying there isn’t racism in America. And unlike our “woke” marching friends, those who have studied history, other countries or law understand that things like the War on Drugs, local (rather than state) funding of education result in unfair, horrible outcomes for minorities. These problems are not helped by purity campaigns, tweets, the Victim Olympics, the bigotry of lower expectations, nor marches.

Witch hunts, virtue signaling and a fool’s errand attempt to “change people’s minds” rather than actually work to make our society fairer do no good. Even if 99.9% of the marchers aren’t violent, and they aren’t violent, their marches provide cover for violence which is the best publicity Trump can get. If the non-racist party loses this election we’ll have the woke – and those they stupidly gave cover to – to partly thank.

A conservative today is at about the same place on the political spectrum as a liberal was 30 years ago so don’t tell me there’s no progress. In the past 30 years police shootings of all people are down and that ultimate, perhaps only honest confessional, google searches, inform us that searches for racist jokes have steadily declined (S. Pinker, et al.).

We have far to go in America before we realize M.L.King’s vision of “content of character” – but we’re getting there despite regressive, quasi-religious moral panics like Robin Di Angelo’s “white fragility” nonsense, the intellectually bankrupt 1619 Project, I. X. Kendi’s “anti-racism” fanaticism or psychologically unsound and discredited notions of “microaggressions”. Add to that the satisfying human desire to blame, particularly of the woke to blame white men for everything (and just wait for that blow back..it is called “Trump”)… and we witness progress reversed.

White and black people of good conscience and kind heart are deeply offended by the concept of “original racial sin” (born white) or being barked at to “check yer priv” irrespective of our actual background and circumstances, all due to our skin color or the sins of those whom the Woke Rouge assume to be our ancient ancestors. “Silence is Violence” is a slogan, not an argument and further, is so incorrect as to be not even wrong.

The woke are turning us against ourselves for their own cut-rate phony “virtue” and their very real profit. Robin Di Angelo bills at $16,000 a session, I. X. Kendi charges more.

So. Did you enjoy our world tour?

David Anderson, 48, is an Australian-American attorney in Chelsea, New York City. His educational background is in psychology, Middle East politics and law. He formerly worked on Wall St. as well as in criminal defense and corporate law. He writes for TheModerateVoice, DemocracyChronicles.org, Counterpunch and Forbes.