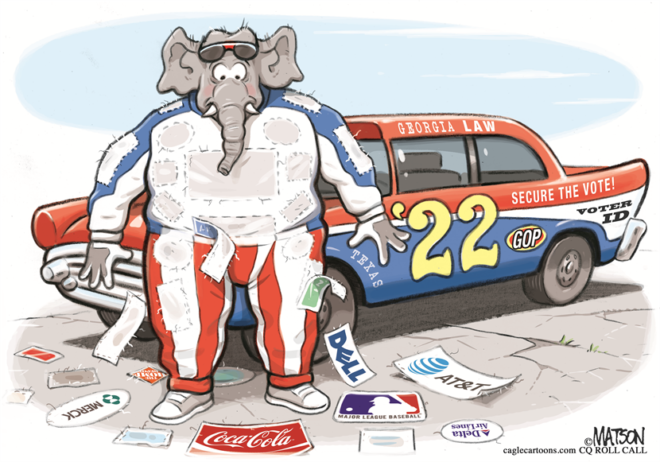 Republicans and corporate America have been conjoined for so long that any breach in the bond is almost impossible to imagine. Yet we’re seeing one now, thanks to the GOP’s decision to give free rein to its authoritarian impulses.

The way it has long worked is easy to explain. Corporate America shovels big bucks to the Republicans, who in turn ensure via legislation that corporate America makes as much money as possible, which in turn ensures that the Republicans will be further rewarded. That’s why Mitch McConnell has long championed corporate donations as “free speech” and insisted that those donors have the right to give money without disclosing their names.

But now that some corporations have belatedly decided it’s in their best business interest to oppose the GOP’s unprecedented vote-suppression efforts (most notably in Georgia), all of a sudden Republicans like McConnell are outraged. Apparently it’s freedom when corporations say and do stuff that echoes the GOP agenda, but if they dare stray from the lockstep party line – and speak ill of the strategy to sabotage democracy – then Republican heads detonate with maximum decibels.

And so now that Georgia-based Coca Cola has denounced the state GOP’s voter-suppression law as “a step backwards,” and that Georgia-based Delta Airlines has accurately pointed out that the law “will make it harder for many underrepresented voters, particularly Black voters, to exercise their constitutional right”…well, suffice it to say that McConnell and other party hacks are suddenly not big fans of corporate free speech.

In a statement Tuesday, McConnell complained that “parts of the private sector keep dabbling in behaving like a woke parallel government,” and he warned that unless these firms cease their “frantic left-wing signaling,” they would pay a steep price: “Corporations will invite serious consequences.”

You have to laugh at these people. They’re all for corporate free speech – unless corporations say something they dislike. Then their impulse is to threaten some form of punishment. (A government crackdown on rebellious corporations? Gosh, that smacks of socialism.)

McConnell and his pals don’t seem to grasp the irony of the situation: Coca Cola, Delta, and Major League Baseball (plus, in Texas, American Airlines and computer magnate Michael Dell) have decided that defending the right to vote would best serve their interests in the free market. They decided that silently abetting authoritarianism would be bad for business, pissing off customers as well as their employees. Yes, folks, it’s all about the free market – which Republicans purport to worship.

Granted, you can make the case that Republicans have reason to be angry. After all, corporate America has long pumped money into the GOP, to the same state legislators who’ve been concocting vote suppression bills nationwide. Since 2015, corporations have reportedly steered $50 million to those state legislators – not necessarily for the express purpose of suppressing the vote, but simply because they were Republicans (for whom vote suppression and racial gerrymandering has long been a top priority, well known to anyone paying attention).

So corporations have long been political players, lobbying for interests that typically align with Republican priorities; the only thing that’s different now – albeit with only a handful of prominent firms – is that, from the GOP’s perspective, they’re suddenly playing for the wrong team.

One more irony: The GOP, in its knee-jerk opposition to President Biden’s infrastructure plan, insists that it’s unfair to finance the rebuilding of America by hiking taxes on corporations. So what are they going to do now – agree to hike taxes on corporations, as punishment for “woke” free speech?