Posted on February 22, 2021
You are here: Home / Arts & Entertainment / Cartoons / SINGING IN THE COVID RAIN (Cartoon, Column and Video) 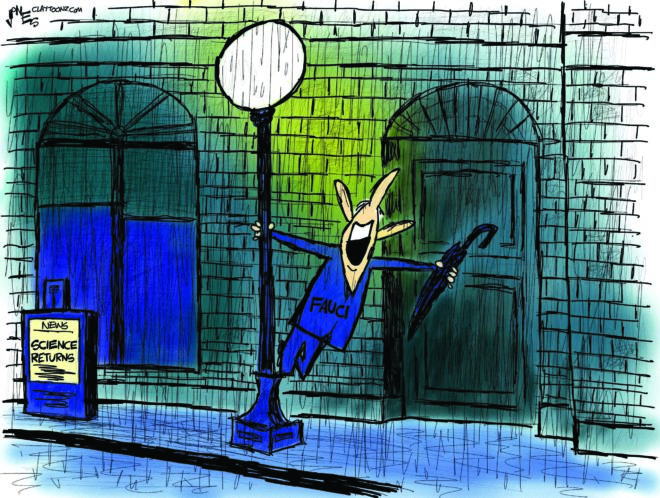 Science and facts took a back seat during the Trump era. Who am I kidding? Back seat? Facts weren’t even along for the ride. Sean Spicer’s very first press conference was about the crowd size for Trump’s inauguration and how it was the “biggest attended and viewed in history.” And yeah, it was all fun and chuckles for a while, but when lives were on the line, it stopped being funny and became infuriating.

Donald Trump lied about the coronavirus…repeatedly. He didn’t just lie or make inaccurate comments. From the recordings between Trump and Bob Woodward, Donald knew he was lying.

It was a year ago that the first case of the coronavirus was detected in this country. When we had 15 cases, Donald Trump said it would soon be down to zero. A year later, we have 24,633,015 cases of the virus and 410,378 deaths.

Dr. Anthony Fauci, the nation’s leading infectious disease expert , said the “lack of candor or facts” contributed to the number of lives lost during the coronavirus pandemic over the past year.

Just as Donald Trump instigated a white nationalist terrorist attack against our government, he instigated a war on facts and science. He was the ringmaster of lies and the politicization of this disease. Because of Donald Trump, Republicans downplayed the virus and resisted the wearing of face masks and practicing social distancing. For all we know, these idiots stopped washing after going to the rest room. To them, pee fingers may be freedom and liberties.

Dr. Fauci is now liberated. For the past year, he was been held back from delivering briefings on the coronavirus, which have now resumed under the Biden administration.

Speaking to John Berman on CNN, Fauci said he didn’t want it to be a “sound bite,” but said, “I think if you just look at that you can see that when you’re starting to go down paths that are not based on any science at all. That is not helpful at all, and particularly when you’re in a situation of almost being in a crisis with the number of cases and hospitalizations and deaths that we have.”

He continued, “When you start talking about things that make no sense medically and no sense scientifically, that clearly is not helpful.”

You mean things that don’t make sense medically or scientifically like Hydroxychloroquine being a cure…or, oh, I don’t know…injecting sunlight and bleach into the body? Shit like that?

As Dr. Fauci points out, “There’s no secret. We’ve had a lot of divisiveness, we’ve had facts that were very, very clear, that were questioned. People were not trusting what health officials were saying, there was great divisiveness, masks became a political issue.”

It went beyond being divisive in the Trump administration. His MAGAts are still attacking Dr. Fauci and portraying him as an evil science overlord shutting down the country while laughing like a maniac. Because of Trump’s attacks assisted from the goons at Fox News over something that never should have been partisan, Dr. Fauci and his family had to get protection. How dare he try to save lies.

In reference to President Biden, not the guy who used to occupy the Oval Office, Dr. Fauci said, “So, what the president was saying, right from the get-go was, let’s reset this. Let everybody get on the same page, trust each other, let the science speak.”

Yesterday, the administration said that the Trump administration left no vaccine distribution plan. One source said, “There is nothing for us to rework. We are going to have to build everything from scratch.” Fauci disagreed.

The doctor said, “We certainly are not starting from scratch. You can’t say it was absolutely not usable at all.” That’s not a huge endorsement about what Trump left behind. Maybe it’s like an empty peanut butter jar except you can still lick off what’s left under the lid. See? Not entirely unusable. But he did disagree with the administration sources, though not directly with President Joe Biden, who said the Trump administration’s distribution of coronavirus vaccines has been a “dismal failure.” The entire Trump presidency (SIC!) was a dismal failure.

But hey, it’s good to have facts back. It’s good not to be b.s’ed over every matter large and small. This is the beginning of repairing the damage from the Trump administration which starts with being honest. Now, good luck convincing the 70 million who believe in deep state Satanic-worshipping pedophiliac lizard people to put on a mask.