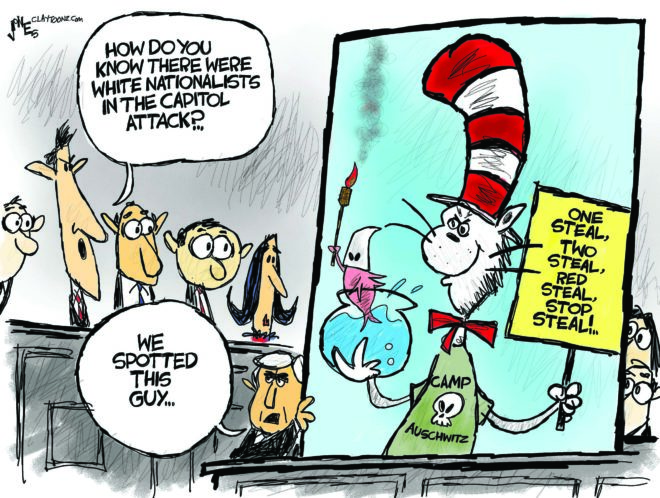 Six Dr. Seuss books will not be published anymore for containing racist images. Unfortunately, Republicans are continuing to put members on the Senate Judiciary Committee despite their being racists and terrorists sympathizers.

While Fox News and other conservatives, and even some liberals, have called the pulling of the Dr. Seuss titles “cancel culture,” the decision was made by the company that owns and publishes the books. None of the titles is a big classic, like “The Cat in the Hat,” or, “The Lorax,” but they did pull “The Racist Senator who started a Riot then fled to Cancun while Texas froze and made his daughters scapegoats.”

The company overseeing the legacy of Dr. Seuss believes that removing these books will preserve his legacy. You know, by hiding a portion of his legacy. Theodor Seuss Geisel, the author who created Dr. Seuss and classics like “Green Eggs and Ham”, considered himself “woke” for his time. Not that they used the word “woke” back then, but you know what I mean. He believed he was open-minded and fighting hate while being unable to conceal his underlying prejudices in depicting conical-hat wearing Asians using chopsticks and grass-skirt-wearing barefoot Africans. It’s kinda like woke governors who champion the Me Too movement, then walk up to strange women at weddings, grabs their faces and says, “You’re aggressive. How about a kiss?”.

Dr. Seuss was pretty racist and he didn’t know it. But ask racists like David Duke and Donald Trump if they think they’re racist and they’ll tell you no, despite the fact they’re racist-covered racists with a racist cream filling (I stole that from Scrubs).

And if the Dr. Seuss company can see that maybe it’s wrong to poison minds by educating them with racist images, then why can’t the Republicans see that it’s poisonous to put people on the panel questioning how the Capitol attack happened when they’re the same mofos who helped instigate the attack?

FBI Director Christopher Wray testified before the committee that the attack was committed by domestic terrorists. Seeing that they attacked the United States government to overturn an election, it’s pretty obvious they were terrorists. But they weren’t just any old terrorists. They were racist terrorists. The attack, encouraged by Donald Trump who rallied the terrorists and told them when to be there, were white nationalists. White nationalists are responsible for the majority of all terrorism in this nation.

Of course, the two guys on the committee who are asking, “How did this happen?” are the same two guys who held up certifying the election and encouraged the terrorist attack. Ted Cruz was asking who these terrorists were despite there being video footage of them in the Senate chambers talking about how Ted Cruz was helping them. The other goon on the panel, Josh Hawley, gave them a fist raise of encouragement before the attack.

During the hearing, Hawley was very interested in learning how the FBI was using geolocation data and metadata cellphone records from cellphone towers to track people who participated in the Capitol riot…and then he went outside and smashed his phone with a hammer.

Thing One and Thing Two on the panel continue to wreck the place by spreading the lie Donald Trump won the election and leftist activists were a part of the attack. Say what you will about the Cat in the Hat, but when he was done, he cleaned up his mess.

If I ran a zoo, I’d ban the racist-loving and insurrectionist goons Ted Cruz and Josh Hawley. Nobody wants to see them…except white nationalist terrorists.