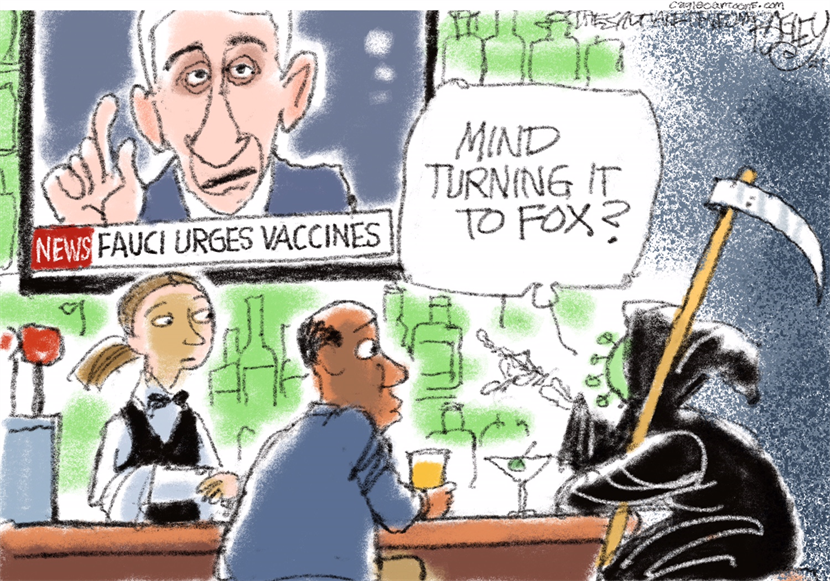 Pro-life Americans, which I define as people who want to defeat the pandemic, should welcome support from all quarters – including the darkest precincts of the Fox propaganda machine.

Hence it was nice this week to hear Sean Hannity utter these sentences:

“Please take COVID seriously. I can’t say it enough. Enough people have died. We don’t need any more death…Research like crazy, talk to your doctor, your doctors, medical professionals you trust based on your unique medical history, your current medical condition, and you and your doctor make a very important decision for your own safety. Take it seriously. It absolutely makes sense for many Americans to get vaccinated. I believe in science. I believe in the science of vaccination.”

It shouldn’t be news when a guy with a national audience declares that the Earth is round, but, hey, we’ve always set the Fox bar pretty low. And Hannity wasn’t alone. One of the Fox News morning hosts, Steve Doocy, made the same plea: “Look, the pandemic right now is really just with people who have not been vaccinated. Ninety-nine percent of the people who died have not been vaccinated…If you have the chance, get the shot, it will save your life.”

So what do we think is going on here? Are there internal corporate qualms about lying non-stop to the network’s gullible couch potatoes? Has there been some kind of calculation that Fox has killed off too many Americans, that perhaps it’s bad form to root for the pandemic’s delta variant by pumping nihilistic BS into the empty heads of red-state fans?

It’s theoretically possible that Fox has been stung by some of the criticism it’s getting lately. A former Fox executive, Preston Padden, said earlier this month that the infauxtainment outlet is “poison for America,” that its relentless ridicule of public health measures “has contributed substantially and directly to the unnecessary deaths of many Americans.”

A recent national poll says that 45 percent of Republicans who regularly watch Fox are hesitant or unwilling to get vaccinated; what’s truly repugnant is that the various hosts who attack the vaccines (and especially the Biden administration’s efforts to popularize the vaccines) are in fact vaccinated – and that Fox, to protect its returning staffers, is creating a vaccine passport.

So has Fox made a corporate decision to change its ways? Is it feeling the heat?

Let’s not get too excited. Most likely, Hannity and Doocy (and another anchor, Bill Hemmer) are merely trying to help Fox cover its rear.

Tucker Carlson and Laura Ingraham continue to fulminate against mass vaccinations – Carlson says the prospect of health workers going door to door is “the greatest scandal in my lifetime, by far. Another talking head, Brian Kilmeade, said the government has no business trying to safeguard the public’s health (“It’s not their job to protect anybody”), an ignorant remark that’s contradicted by the U.S. Constitution, which establishes a government to “promote the general welfare.”

So when Hannity and a few others make nice with reality, the Fox spokespeople can claim that the network really covers “both sides” of the debate (even though one side is bogus).

Besides, Hannity and Carlson are hotly competitive for program ratings. Hannity’s foursquare endorsement of vaccines looks like a shot across Carlson’s bow, who appeared to retaliate when he grumbled about people who offer “medical advice on television.” In all likelihood, this is not even a policy disagreement – it’s probably just a peeing contest.

So it’s a pipe dream to believe that Hannity’s vaccine announcement signals a Fox U-turn, or any kind of mea culpa about killing off so many Americans (indeed, its own viewers). But with the pandemic raging anew most glaringly in the low-vaccinated states (what I call the Dumbbelt), any help from any quarter is welcome.

If retweeting Hannity can save even one life, go for it.