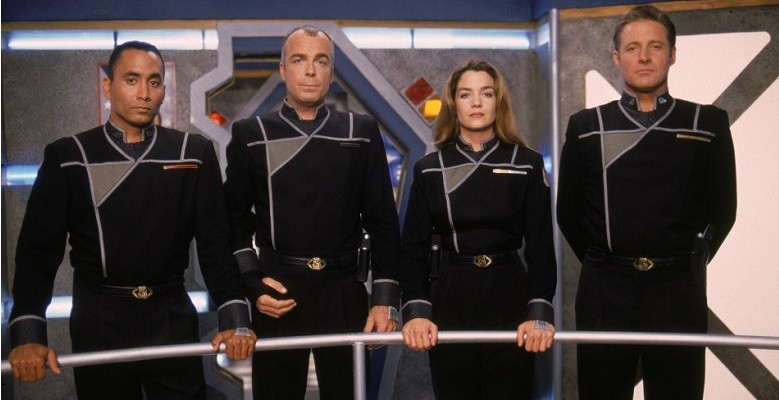 J. Michael Straczynski has announced plans to reboot Babylon 5 as a movie. One reason for doing it his way is that Warner owns the television rights but Straczsynki retained the feature film rights:

Speaking at San Diego Comic Con last week, Straczsynki announced that he would soon be sitting down to write a Babylon 5 feature film, which is envisioned as a reboot of the iconic sci-fi series. JMS said that he plans to get the script locked down by the end of 2015 and the film would then enter production the following year in 2016.
[icopyright one button toolbar]

Next to nothing is known about the plot for this Babylon 5 feature film, beyond the fact that it is a reboot of the concept seen in the series. That said, J. Michael Straczynski has stated that he would like to use cast members from the series, such as Bruce Boxleitner and Mira Furlan, in new roles in the feature film. “I’d love to see Bruce as the President of the Earth Alliance”, he said.

The hope is that Warner Bros, who produced the Babylon 5 television series, would step up and green-light a “big budget” feature film once the script has been completed. But owing to the nature of the deal that Straczysnki inked with the studio to produce Babylon 5 in the early 1990s, he, rather than Warner Bros, owns the feature film rights to the show. Should Warner Bros. choose not to greenlight a B5 movie, Straczynski would still proceed with the feature, which would then be funded and produced through his Studio JMS banner on a budget of $80 – $100 million.

Although Syfy passed on the show, there is still some hope for a remake of Blake’s 7.

The BBC has renewed Doctor Who for an eighth season since the show returned, again staring Peter Capaldi, with the shows to be presented in a continuous run. Steven Moffat said recently that there are no plans for either the return of the Master or for a tenth anniversary show (which would seem strange after doing a 50th). Moffat has also expressed a willingness to do a Doctor Who/Sherlock cross over, but others involved are not interested. Would it look something like the video above, except with Peter Capaldi instead of Matt Smith?

Above is, perhaps, how Captain America: The Winter Soldier should have ended. Directors Joe and Anthony Russo discussed their upcoming projects, Agent Carter and the third Captain America movie:

Before turning their attention to the next feature, the Russos are directing several episodes of the spin-off TV series Agent Carter, debuting on ABC in January 2015. The miniseries follows the solo adventures of Peggy Carter, the love of Captain America’s life and founder of S.H.I.E.L.D. in the 1940s. From there, the brothers will tackle the third film, which picks up “a couple years” after Winter Soldier left off. Although the heart of the movie will be Steve Rogers’ complicated relationship with his childhood friend Bucky Barnes, the themes of politics and power will still be in play. “The character was invented for an explicitly political purpose. So it’s hard to get away from that nature,” Anthony tells Yahoo. It’s also important to the directors that Captain America doesn’t become another disillusioned antihero. As Joe sees it, “his morality is part of his superpower.”

While they’re not leaking any major details from the 2016 film, the Russo brothers promise that they’re “bringing some new elements to the table that will give us a twist on Winter Soldier.” Does this mean that Steve Rogers will pass the Captain America shield to Bucky Barnes (aka the Winter Soldier) or Sam Wilson (aka the Falcon), both of whom have donned the stars-and-stripes in the comics? With actor Chris Evans shifting his focus to directing, and Sebastian Stan and Anthony Mackie already in place as the Winter Soldier and the Falcon respectively, the next film could allow a new hero to step in.

Elsewhere in the Marvel universe, FBI Special Agent Dale Cooper (Twin Peaks) will be meeting SHIELD. Kyle MacLachlan has been cast to play Skye’s father on Agents of SHIELD. Chloe Bennet said at Comic-Con that next season will also involve more hair. Skye will have bangs and Brett Dalton will do the evil-Spock thing of the mirror universe and have a beard as the evil Grant Ward.

Defiance has done a good job of creating a world with numerous well-developed characters and alien races, but often while watching I wonder if there is any point to it all. It lacks the big story ideas of a Babylon 5 or Battlestar Galactica. The showrunner, Kevin Murphy, did work on BSG and I am glad that he got away from the idea of doing the show as a “science-fiction crime of the week.”

AX: How did DEFIANCE started and how did it change when you came onto the project during its development?

KEVIN MURPHY: The original version was a little more of a closed-ended procedural, it was kind of more of a science-fiction crime of the week, and we were in the process of changing that when CULT got picked up and [original DEFIANCE co-creator/show runner] Rockne O’Bannon left. I then had a choice that I wasn’t sure that the show was going to work in the incarnation that it currently was in, and I didn’t want to have responsibility for something that didn’t work. So I gave Syfy a choice. I said, “I’ll transition you into your next show runner, and I’ll make sure that casting continues and produce the pilot, but I’m not going to stay on for the series unless I believe in the show.” And they were like, “Well, what would you want to do to it?” And it was basically, “Well, it involves getting rid of pretty much all the scripts, and let me give you my pitch.”

So I did the pitch, worked it out with the writing staff, and at this point, it was Rockne’s last day, and he was helping us to kind of reconceive it, and Scott Stewart, the director, was very involved in the process, and so was Michael Taylor, who had worked on BATTLESTAR GALACTICA and was a member of staff under me. And we pitched the whole thing to [then-Syfy Channel president] Mark Stern while he was driving in his car on vacation with his family in Palm Springs. And he had his wife and kid in the vehicle with him, and the pitch lasted about ninety minutes, because we pitched the entire story from beginning to end, every single beat, and by the time he pulled into the hotel in Palm Springs, we had finished our pitch and he was like, “Okay, I love it. Go write it.”

AX: Did you make major changes to the characters?

MURPHY: The PAPER MOON thing I added, the idea that Nolan [the town’s new law officer, played by Grant Bowler] came in from the outside and that he was a con man and a drifter and a huckster and a criminal. That was all stuff that I added. The idea that Amanda has only been mayor for six weeks and she’s the former mayor’s assistant and no one takes her seriously, that was an addition; the idea that Irisa [Nolan’s adopted Irathient daughter, played by Stephanie Leonidas] uses knives and Irisa being sort of the feral badass was an invention of mine. And Michael. When I say “me,” I’m including Michael Taylor, who was definitely my partner in crime. We would not have gotten that script in the shape it needed to be in without Michael at my side.

In follow-up of an item from last week, the cast of The Big Bang Theory did settle on a new contract. The top three stars, Jim Parsons, Johnny Galecki and Kaley Cuoco, will each earn $1 million per episode for the planned upcoming three seasons, and there is talk of potentially adding an eleventh season.

Google Maps has added maps of the moon and Mars. I imagine that going off the earth was inevitable once they added the TARDIS to their maps.