Posted on May 14, 2022
You are here: Home / Bigotry / San Diego Rabbi Was Classmate of Texas Rabbi Taken Hostage 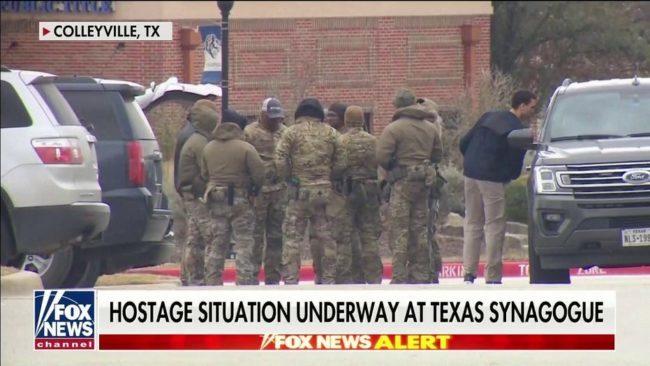 SAN DIEGO — Rabbi Jason Nevarez of Congregation Beth Israel in San Diego attended college with the rabbi who was taken hostage in Colleyville, Texas. After college, they were classmates at the Hebrew Union College seminary in Jerusalem in 2001 during the height of the Intifada.

In an interview, Nevarez said that Rabbi Charlie Cytron-Walker had endured terror incidents before and that if anyone could have brought the hostage-taking drama in Colleyville to a successful conclusion, it would have been his friend “Charlie.”

Rabbi Charlie Cytron-Walker[/caption]Cytron-Walker had graduated from the University of Michigan at Ann Arbor in 1998 and Nevarez graduated the following year. While students, both taught at the Torah school at Congregation Beth Emeth, where Nevarez subsequently went on to become the youth director. Charlie Cytron and Adena Walker decided to combine their surnames when they married approximately 25 years ago, Nevarez said. “I remember the apartment where they lived in Jerusalem.”

Cytron-Walker, whose Texas congregation is also named Beth Israel, had endured “the pain of terrorism, so he had been through trauma already,” Nevarez reflected. “I remember there was a close call when a suicide bomber blew himself up in front of HUC by accident. He was heading for the Old City. He triggered before he went. There was no security sense at the time. It was just every day that there was a terrorist shooter, a suspicious package, or someone blew himself up. Charlie, I remember, was one of the people who was there in the morning on his way to the seminary” when the suicide bomber accidentally detonated.

“There were many other close calls. I had a close call at a cafe. I was about to head there, and a classmate stopped me and 20 minutes later, there was a blast,” Nevarez said. “We lived in the height of trauma. He had close calls and experiences and lived through that and now having to endure 12 hours of whatever he ended up enduring during this standoff, I can’t even imagine.”

Asked to describe his colleague, Nevarez said “he is a mensch of the highest order. He is someone who is kind. He is sincere. He is a community builder. If you are looking for someone to be there for you, he is the person. He has demonstrated that time and again in different circumstances. He was very much into multi-faith and interfaith relationships. That was his thing. he did that today.”

Nevarez said he heard a report that even the hostage taker, who was killed at the end of the standoff, said at one point that he really liked the rabbi. “That is not surprising. That is who he (Cytron-Walker) is. He is very likeable, very kind, very sweet. He’s a mensch.”

Nevarez was asked how the infiltration of his friend’s congregation, the 12-hour standoff, the safe release of the rabbi and three other hostages, and the death of the hostage-taker influenced his perspective about his own congregation.

“I think we have to be hyper-vigilant about identifying people who we may not know, being curious about them,” he responded. “Our security is top notch. We are one of the most protected sites in San Diego. We have a security director, two armed guards on duty whenever anyone is in the building. We spent a fortune to do that, but we are very blessed to be able to do that. For me, it was an awareness because what I heard on the report was that he (the hostage taker) was welcomed. He came in saying, ‘Is this a homeless shelter?’ and he was welcomed in. I don’t know if he would have had the opportunity to do that here because we have guards at each entrance. But I think we all have to be a little more hyper-vigilant.”

Does this mean that Jewish synagogues can no longer be places to “welcome the stranger?”

Nevarez responded that “we need to reimagine how we welcome the stranger. Our campus is an open campus but there are protocols to get in. As long as we remain vigilant about these protocols, we can always maintain sacred space and letting those who want to be part of our community to have the opportunity to attend here.”

Nevarez said he was inspired by how Jews all over the world came together to support the congregation in Colleyville. “I think we have much more in common than we think we do. It shouldn’t take tragedy to bring us together and we have to keep working at it. The other thing I would say is that I have been working really hard with Federation [Jewish Federation of San Diego County] on building our ally-base in the non-Jewish world. We’re working on it; it’s a process. I was disappointed that I didn’t receive much outreach at all from my non-Jewish faith partners, and I have a few that I trust and work with regularly. There is a lot of work to be done.”