Rush Limbaugh. perhaps the highest rated talk show host in American history, a broadcaster who truly knows broadcasting, and a conservative Republican icon. is now blasting President Barack Obama because Obama ordered the pirates to be killed — and the pirates were teenagers. And he casts it in a way suggesting that innocents were slaughtered. Read it here.

Honestly: Who ever would have thought thirty years ago that millions of Americans would tune in for three hours a day to listen to someone who does almost nothing but demonize and whip up rage against anyone who belongs to a different political party and the other party itself? Politics has become entertainment in the form of one big grudge match. Not long ago, Limbaugh and other conservative talkers were accusing Obama of dithering on what to do about the pirates that held Captain Richard Phillips hostage. Now Limbaugh has this new line.

Question to Republicans: I’ve voted for some Republicans over the years (and for some years was a registered Republican) but now you seriously expect me to vote for anyone who belongs to a party that holds this man up as indicative of your party’s principles, thoughts and values? It isn’t just that Limbaugh is a Republican — and no one is calling for Limbaugh to be silenced. It’s that Republicans either echo him, pay homage to him — or fear to criticize him. This won’t help GOPers make inroads in chipping away at Obama’s coalition that now includes independent voters and non talk show political culture Republicans.

Some cartoonists such as the The Hartford Courant’s Bob Englehart have clearly had enough of seeing the GOP fall lockstep behind Limbaugh as well: 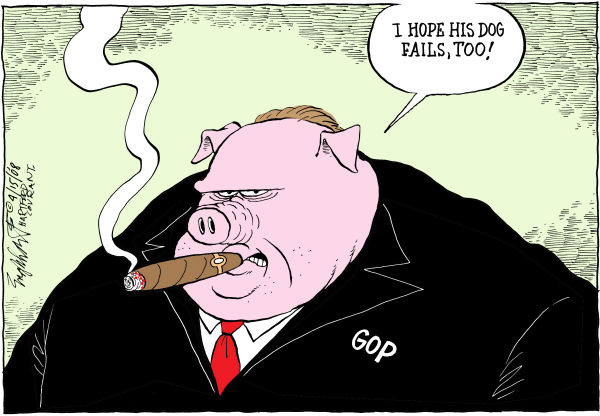 This cartoon is copyrighted and licensed to appear on TMV. All Rights Reserved. Unauthorized reproduction prohibited.