Fiscal stimulus fuels U.S. economy in 2021 to its best performance since 1984

Stephen Breyer is set to retire – should his replacement on the Supreme Court have a term limit?

Posted on January 21, 2022
You are here: Home / Politics / Robert McNamara, Architect of Vietnam War, Has Died 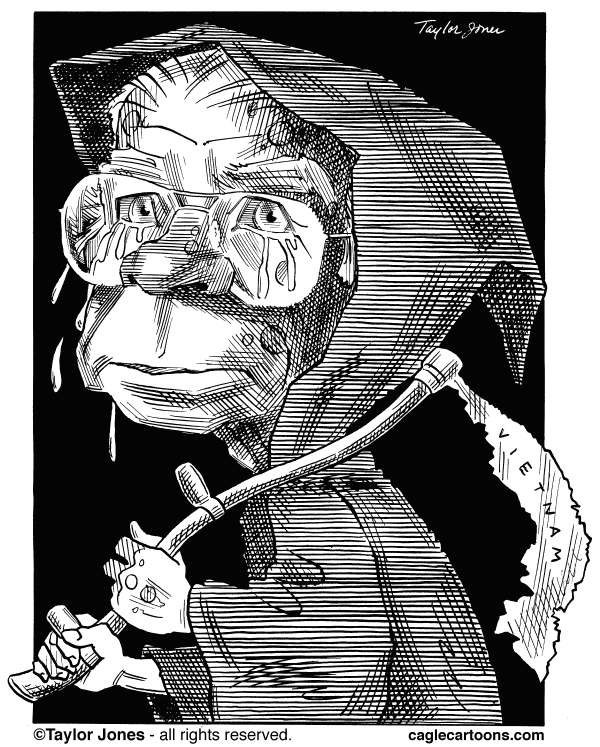 Tim Weiner, New York Times reporter and author of  Legacy of Ashes: The History of the CIA (I’ve read the book; it’s first rate), has a long, absorbing article about the former Defense Secretary’s career, which is also a mini-history of U.S. foreign policy at the height of the Cold War.

McNamara is a complex, contradictory character, fascinating to read about. He was widely reviled, both on the left and on the right, for the public regrets he expressed about the Vietnam War long after it was over, and for saying that the U.S. firebombings of German and Japanese cities, and the nuclear bombings of Hiroshima and Nagasaki, during World War II (he played a side role in the Japanese firebombings) would have been considered war crimes (and officials like himself would have been tried as war criminals) had we lost that war.

It’s hard to know what to make of McNamara. He fiercely and uncompromisingly supported the war for many years, and he was directly responsible for decisions that cost the lives of tens of thousands of Americans, and millions of Vietnamese — all ultimately in service to a war that could not be won. Yet, it’s also true that his regrets about the war haunted him for the rest of his life — to the point where, late in life, people who knew him described him as a broken figure:

The war became his personal nightmare. Nothing he did, none of the tools at his command — the power of American weapons, the forces of technology and logic, or the strength of American soldiers — could stop the armies of North Vietnam. He concluded well before leaving the Pentagon that the war was futile, but he did not share that insight with the public until late in life.

In 1995, he took a stand against his own conduct of the war, confessing in a memoir that it was “wrong, terribly wrong.” In return, he faced a firestorm of scorn.

“Mr. McNamara must not escape the lasting moral condemnation of his countrymen,” The New York Times said in a widely discussed editorial, written by the page’s editor at the time, Howell Raines. “Surely he must in every quiet and prosperous moment hear the ceaseless whispers of those poor boys in the infantry, dying in the tall grass, platoon by platoon, for no purpose. What he took from them cannot be repaid by prime-time apology and stale tears, three decades late.”

By then he wore the expression of a haunted man. He could be seen in the streets of Washington — stooped, his shirttail flapping in the wind — walking to and from his office a few blocks from the White House, wearing frayed running shoes and a thousand-yard stare.

He had spent decades thinking through the lessons of the war. The greatest of these was to know one’s enemy — and to “empathize with him,” as Mr. McNamara explained in Errol Morris’s 2003 documentary, “The Fog of War: Eleven Lessons from the Life of Robert S. McNamara.”

“We must try to put ourselves inside their skin and look at us through their eyes,” he said. The American failure in Vietnam, he said, was seeing the enemy through the prism of the cold war, as a domino that would topple the nations of Asia if it fell.

In the film, Mr. McNamara described the American firebombing of Japan’s cities in World War II. He had played a supporting role in those attacks, running statistical analysis for Gen. Curtis E. LeMay of the Army’s Air Forces.

At least he asked the question, though. Many never do. It has to count for something that, having been part of such a profoundly immoral and ill-advised venture, Robert McNamara at least had the capacity to — deeply and painfully — regret.

The cartoon by Taylor Jones, Politicalcartoons.com, is copyrighted and licensed to run on TMV. All Rights Reserved. Unauthorized reproduction prohibited.