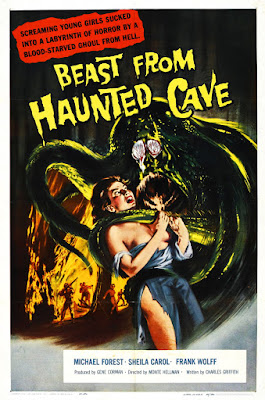 Retromedia Entertainment has put out a beautiful Blu-Ray print of Beast From Haunted Cave (1959) on a double-bill with The Wasp Woman (1959). Both films were produced by director Roger Corman’s fledgling company – Film Group. The Blu-Ray of both films also includes additional scenes added to both films to pad out the length for television broadcasting. This Blu-Ray is a great nostalgic collectible, since both films played on a double-bill at drive-in movie theaters when they premiered.

A Chicago businessman named Alexander Ward (Frank Wolf), his secretary Gypsy Boulet (Shelia Caroll) and two of Alex’s employees – Marty (Richard Sinatra) and Byron (Wally Campo) arrive at a mining ski town in South Dakota during the winter ski season. Alex, Marty and Byron plan to blow up the town mine, known as the Broken Boot Mine, to create a diversion so they can rob the town’s Administrative Building payroll office to steal gold bars in a safe.

The night before the robbery, Marty takes the local bar waitress named Natalie to the Broken Boot Mine to plant explosives. While in the mine, an unseen creature attacks the couple and takes Natalie to another location on the mountain. Marty rushes back to town to tell his boss Alex about the incident and tells him a monster killed Natalie. Alex does not believe him, despite Marty describing a giant egg of the monster in the mine.

The next morning, the explosives ignite, killing one old man in the mine. As the town’s attention is diverted to the mine explosion, Alex, Marty and Bryon crack the town payroll safe and steal two gold bars each. When they return to the ski lodge, they meet Gil and Gypsy at the top of the ski hill. The group spends the day skiing to Gil’s mountain cabin.

While on route to Gil’s cabin, the group sets up an overnight camp. Venturing outside of the camp, Marty encounters the creature from the Broken Boot Mine as the rest of the group is sleeping around a campfire. Marty also witnesses the body of cocktail waitress Natalie cocooned to a tree from the monster. He fires several shots at the creature and awakes the rest of the group. Realizing no one will believe him, Marty tells the group he saw nothing.

The group arrives at Gil’s cabin the following morning and meets Gil’s housekeeper named Small Dove. Tensions begin to weigh heavy on Gil as he realizes his guests are up to something. Alex appears to not appreciate Gil’s hospitality and the two get into a fist fight. Gil and Gypsy become romantically attracted to each other and decide to sneak away from the group to a nearby haunted cave.

In the haunted cave, Small Dove has been taken by the monster and cocooned to the cave wall. Alex, Marty and Byron have traced Gil and Gypsy to the cave and are attacked and killed by the monster as they enter the cave. It is in these final scenes that the viewer gets to see the full view of the monster. Previous scenes only show parts of its body, such as a tentacle reaching out to strangle a victim.

The music used in this film can also be heard in another low-budget Corman gem – Attack of The Giant Leeches (1959). Actor Michael Forest went on to star in The Outer Limits and Star Trek TV series. Actor Frank Wolf’s most famous appearance on the screen is of playing an Irish landowner named McBain who is gunned down by Henry Fonda and his henchmen in the 1968 Italian western masterpiece – Once Upon A Time In The West.