Posted on November 30, 2021
You are here: Home / Economy / REPUBLICANS ARE THE CLOWNS IN THE DEBT CEILING CIRCUS 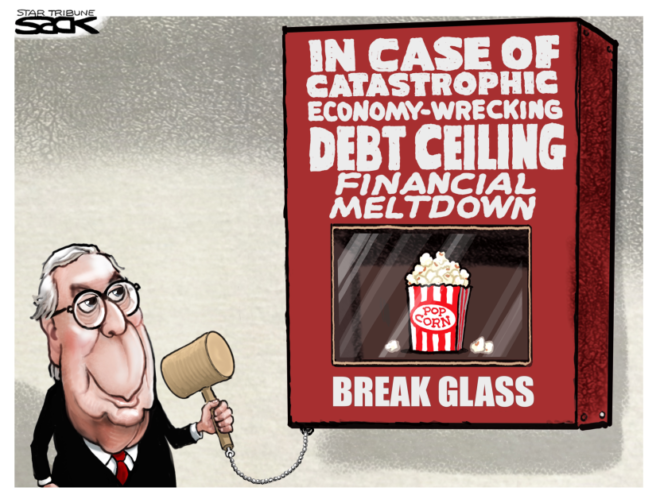 It’s way past political cliche, but that old “Popeye” comic strip where J. Wellington Wimpy promises to pay a short-order cook tomorrow for a hamburger he plans to eat today, is still the best way to describe Republican intransigence this week over a vote to extend the nation’s debt ceiling.

In case you missed it, a week ago Monday Republicans in the narrowly divided U.S. Senate voted to block the approval of new borrowing intended to pay for old debt that they’re complicit in racking up.

While entirely unsurprising, the GOP’s united front on the debt ceiling is the most transparent kind of political cynicism.

Senate Minority Leader Mitch McConnell and his fellow Republicans are pressing Senate Democrats to use the fast-track process known as reconciliation to raise the debt ceiling without GOP votes. That’s the same process the Democrats want to use to bypass the GOP to pass the Democratic Biden administration’s sprawling domestic agenda.

With the Senate deadlocked at 50-50, and a midterm election looming, Republicans want to make Senate Majority Leader Chuck Schumer and his fellow Democrats look as bad as possible as they look to recapture control of the 100-member chamber.

“There is no chance, no chance the Republican conference will go out of our way to help Democrats conserve their time and energy, so they can resume ramming through partisan socialism as fast as possible,” McConnell said Tuesday as another attempt to raise the debt ceiling flopped,.

But, and this is an important but, the inescapable reality here is that McConnell and the GOP are responsible for the spending that’s led to the current standoff, and they’re working as hard as they can to evade responsibility for it. That’s some galactic dissonance for a party that’s tried to portray itself as a champion of fiscal responsibility.

And even that doesn’t hold up under even casual scrutiny.

After Monday’s failed vote, Schumer correctly blamed Republicans, accusing them of “playing games with the full faith and credit of the United States,” Olson reported.

“The Republican Party has solidified itself as the party of default, and it will be the American people who pay the price,” Schumer added.

Writing in the Washington Post, columnist Greg Sargent noted that Democrats could use the budget reconciliation process to get rid of the debt limit, first imposed during the administration of President Woodrow Wilson as a way to fund the nation’s entrance into World War I. Back then, the debt ceiling was capped at a relatively quaint $15 billion, according to NPR.
https://themoderatevoice.com/wp-admin/media-upload.php?post_id=259140&type=image&TB_iframe=1&width=753&height=605
There’s a certain beauty to that plan. But it would require Democrats to do something they are supernaturally bad at doing: Actually using the power that comes with controlling the White House and both chambers of the legislative branch, and playing the kind of hardball it takes to get stuff done.

You can say this much for the Republicans. They might not run the White House or the U.S House, but they routinely roll right over Democrats as if they do.

The Democrats should get rid of both the debt ceiling and the filibuster – thus ending the paralysis in an already broken U.S. Senate – and do the work the voters elected them to do. You can bet Republicans would do the same if they were in charge.

It’s time to take the wheels off the GOP’s clown car before it runs the nation permanently into the ditch.