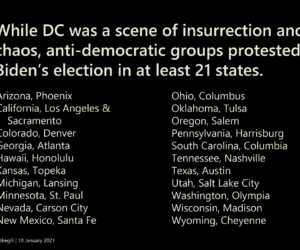 So far details have been few when it comes to the gunman who burst into the Sikh Temple in Wisconsin, killing (depending on the report) six or seven people. But initial indications are that it could be “domestic terrorism.” The Los Angles Times reports that a tattoo on the dead shooter’s body suggests domestic terrorism but it’s too early for a definitive judgment:

Tattoos on the body of the slain Sikh temple gunman and certain biographical details led the FBI to treat the attack at a Milwaukee-area temple as an act of domestic terrorism, officials said Sunday.

The shootings in Oak Creek, Wis., left seven dead, including the gunman, and three critically wounded. One of the injured was a police officer who was expected to survive.

A federal official who spoke on the condition of anonymity because he was not authorized to speak to the media refused to say whether the gunman was thought to belong to a hate group or some other violent group because the investigation was still unfolding.

[UPDATE: ABC News says officials think the shooter may have been a white supremacist:

Though police have not given any details on the identity or motive of the shooter, or released the identities of the victims, sources have told ABC News the shootings are the work of a “white supremacist” or “skinhead.”

This evening, the FBI and a bomb squad arrived at a home in Cudahy, Wis., near Oak Creek, and ABC News Milwaukee affiliate WISN reported the action appeared to be related to the temple shootings earlier in the day.

CNN reports that the feds are treating it as domestic terrorism:

The FBI will investigate Sunday’s rampage at a Sikh temple in a Milwaukee suburb as a “domestic terrorist-type incident” that left at least six people and the gunman dead, the town’s police chief said.

Another three people were wounded, including the first officer to respond to the scene, Oak Creek Police Chief John Edwards said. A second officer returned fire, killing the suspect, according to the chief.

All three of the wounded were in critical condition at Milwaukee’s Froedtert Hospital, spokeswoman Carolyn Bellin told CNN. The congregation’s president was among the wounded, his nephew said.

And another man told the CNN affiliate WTMJ, “Nobody’s angry here. We’re just confused. Was this a random act? Was this directed at us because of the way we look?”

Authorities have not identified the gunman by name, though Thomas Ahern, a spokesman with the ATF’s Chicago division, described him as a white male roughly 40 years of age.

Like other officials, Ahern said authorities have not determined a motive, adding “we are a long way away from that right now.” Teresa Carlson, special agent in charge at the FBI’s Milwaukee division, said late Sunday that investigators are still assessing whether this “might be an act of domestic terrorism, no motive has been determined at this time.”

The Sikh religion originated in northern India around 1500 and has about 25 million followers, 700,000 of them in the United States, according to the Sikh American Legal Defense and Education Fund. Because of their customary beards and turbans, Sikh men are often confused for Hindus or Muslims — and have been the targets of hate crimes since the September 11, 2001, attacks on New York and Washington, said Surinder Singh, a spokesman for the Guru Nanak Mission Society of Atlanta.

Several reports say police will be holding another briefing for the press tomorrow.

ABC News report which includes an interview with a son of one of the victims: