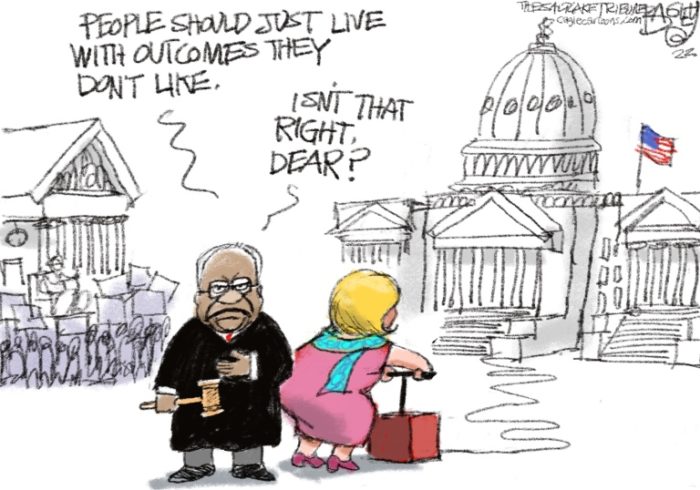 The Post says the committee is increasingly interested in Thomas’ role. This comes in the context of reports that Eastman somehow knew about Supreme Court election tension. The bottom line: there is an increasing belief that Eastman found out about usually secret Supreme Court deliberations because he was in touch with from Ginni Thomas, who learned details from her husband.

BRIANNA KEILAR: Let’s just go back to the beginning of what he was talking about, this e-mail where Kenneth Chesbro is talking about how the potential wild chaos or the violence of January 6 might actually pressure the Supreme Court to ask. It was so interesting to hear Raskin say that it doesn’t prove violence was a strategic instrument, but it does suggest that there was that kind of maneuvering within Trump’s circles. What did you think of that?

CHRIS WALLACE: Well, I think the emails are fascinating. First of all, the email from John Eastman to Chesebro, which is saying that he, and John quite rightly was pressing Congressman Raskin about it, that there seemed to be some backchannel because he’s talking about a big fight inside the Supreme Court. And then Chesebro writes back and says, well, you know maybe they would rule on this would be a challenge to the Wisconsin results if they were worried, and this is all prospective, it’s before January 6, if they were worried about violence on January 6. So it does seem the congressman, as a member of the committee was understandably coy about it, that, you know, the idea that they’re even talking about violence on January 6 sounds like they’re saying the quiet part out loud.

The emails show that Thomas’s efforts to overturn the election were more extensive than previously known, two of the people said. The three declined to provide details and spoke on the condition of anonymity to discuss sensitive matters.

The committee’s members and staffers are now discussing whether to spend time during their public hearings exploring Ginni Thomas’s role in the attempt to overturn the outcome of the 2020 election, the three people said. The Washington Post previously reported that the committee had not sought an interview with Thomas and was leaning against pursuing her cooperation with its investigation.

The two people said the emails were among documents obtained by the committee and reviewed recently. Last week, a federal judge ordered Eastman to turn more than 100 documents over to the committee. Eastman had tried to block the release of those and other documents by arguing that they were privileged communications and therefore should be protected.

While Thomas has maintained that she and her husband operate in separate professional lanes, her activities as a conservative political activist have long distinguished her from other spouses of Supreme Court justices. Any new revelations about Thomas’s actions after the 2020 presidential election are likely to further intensify questions about whether Clarence Thomas should recuse himself from cases related to the election and attempts to subvert it.

And so the Supreme Court’s credibility problems increase. A poll in May found that 54% of Americans disapproved of the court after the leak about the court being poised to overturn the landmark Roe v Wade abortion ruling. News of a Supreme Court justice’s wife actively working to overturn the 2022 election results, and democracy, and possibly giving court delibrations details to the President’s lawyer won’t boost its approval ratings. Or credibility.

If the Post’s reporting, which has also not been independently verified by MSNBC or NBC News, is accurate, Thomas also corresponded with Eastman, who was helping lead the coup effort.

Maybe the dots shouldn’t be connected this way. Maybe Thomas and Eastman had conversations that had nothing to do with behind-the-scenes developments at the Supreme Court.

Or maybe Eastman had thoughts about what was going on among the justices because he had a reliable source.

The Ginni Thomas story is not going away. It’s like peeling back the layers of a rotten onion.

Scoop: the Jan. 6 committee has obtained emails between John Eastman & Ginni Thomas & is now discussing whether they should spend time during hearings exploring Thomas's role. With @jdawsey1 & @emmersbrown > https://t.co/QjKYRW9lRL

If Ginni Thomas were married to anyone other than a Supreme Court justice, the January 6 committee would have subpoenaed her months ago.

She should NOT get special treatment. She was involved in January 6 and should get called to testify like everyone else.

Why are you such a hater? pic.twitter.com/hMLoWo1FSc

Eastman clerked for her husband. It's always seemed entirely too coincidental that they were both pushing the fake slates of state electors plan. https://t.co/2uxEWgLDzC

Add another day to the J-6 hearings and call it GINNI THOMAS DAY.

Clarence is corrupt beyond repair. Long past time for him to go

It is increasingly clear that Ginni Thomas was an integral part of an illegal effort to undermine American democracy. She should testify and face the consequences of her actions. Her husband should resign. He won't. But, he will forever be seen as illegitimate. https://t.co/GsAPeSl0iK

Y'all coming in late to the Ginni Thomas party…we took a lot of heat for running this spot back in April.@ProjectLincoln https://t.co/H91wObLZED