Reflections of the Day We Will Never Forget 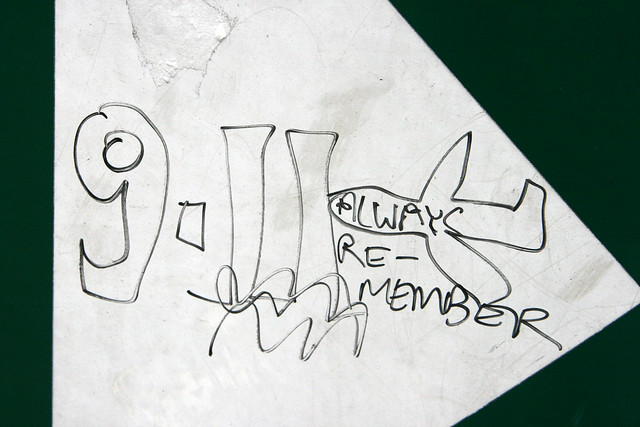 On Wednesday, the 18th anniversary of a day “We Will Never Forget,” all of us remembered exactly where we were, exactly what we were doing, whom we were with at the hour, the minute, when the “impossible” occurred.

Many of those accounts have now been told, but on every anniversary, we remember yet another detail, we hear yet another story, we relive it again.

Those of us who watched from afar, who did not lose any loved ones or dear friends “relive” it in a different way.

But, nevertheless, we remember it all too well.

Even those who were children on that fateful day, even those who do not know anyone who was killed in the dastardly attacks remember the day.

Ashley Nelson, who was 6 years old on 9/11, in a touching article in the New York Times says, “It helps me put things into perspective…The importance of remembering the people that lost their lives and who sacrificed, that’s important to me.”

The same article, noting how so many New Yorkers thought 9/11 was going to be “just another day,” recounts:

At the trade center that morning, people picked up coffee and walked across the plaza, the way they always did. No one going through the revolving doors or stepping into the elevators knew then that it was the last time they would ever do that.

Yesterday, I received an email sharing the reflections of a friend’s relative who — as so many other people on that day, just before the attack — “picked up coffee…”

These are Stephen Young’s reflections through the prism of yet another anniversary:

“I drove to work very early that morning parking my car in the company private garage directly across the street from the South Tower.

Traffic was surprisingly light so, with plenty of extra time, I strolled across to the World Trade Center for coffee and a snack at my favorite cafe before heading down into the subway for my 9:00 meeting in Brooklyn. The time was exactly 8:35 am.

The first strike was 8:44. I shall always be grateful for those 9 minutes that allowed me to safely dodge a fatal bullet.

About two weeks later, public traffic was once again allowed to flow in lower Manhattan. At the end of the work day, I went to the lot to retrieve my car.

I was stunned. I barely recognized it. After nearly two weeks of sitting idle, it was covered with 2-3 inches of that infamous grey soot we all watched, on repeat, billowing through the streets at the base of the collapse; followed by several days of airborne remnants of smoldering debris.

It was a striking image. I imagined encasing the car in a glass tomb as a sort of homage.

I left the surface untouched, climbed in and drove home.

Alex, my daughter, was in the driveway as I arrived. What a great opportunity, I thought, for a powerful learning experience.

I described the thick layer of debris I had first found and that although most of it had blown away in the drive home, mysteriously, much had still remained for the family to observe and experience.

She stared at the car, seemed transfixed, no longer listening but just taking it all in.

I wiped the coating with my hand, presented it to her and said, ‘this is the World Trade Center,’ assuming she might want to make contact with this landmark historical event.

Those few words shifted my lens from feeling national outrage at a devastating terrorist attack to a passionate deep empathy and condolence for the many individual personal tragedies.

Her lesson was just one more in a series of endless teacher-student role reversals that continue to broaden my empathy and vision.”

The author of this story, Stephen Young, was Senior Vice President, Chase Bank, at the World Trade Center at the time. 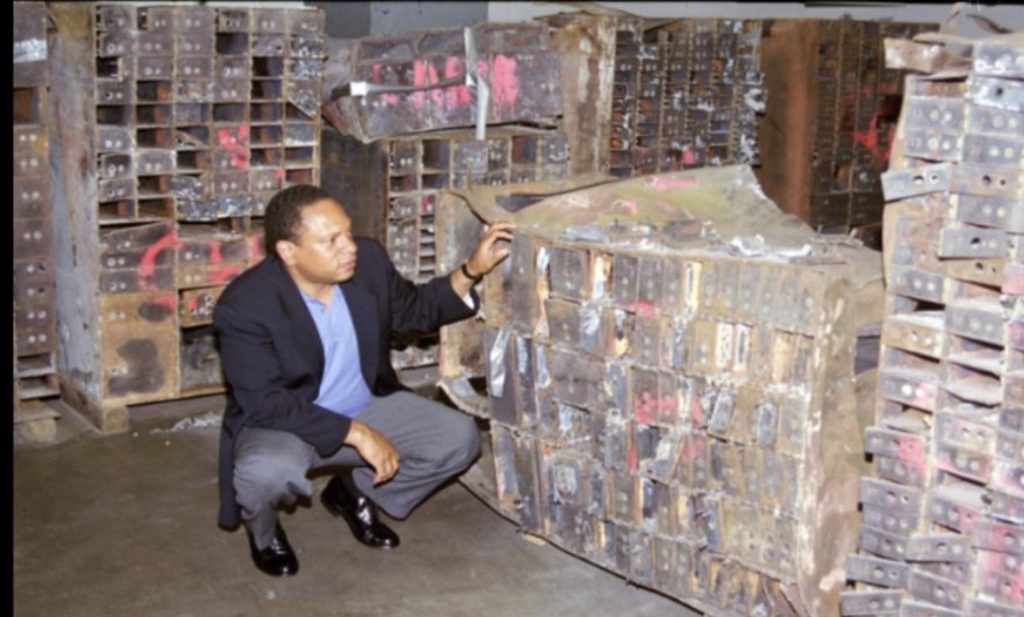 In the photo, above, Young is seen next to safe deposit boxes recovered from the bank vault, after the inferno that consumed the structure.

Each of the boxes has a unique story. Young may share some of them with readers in the future.