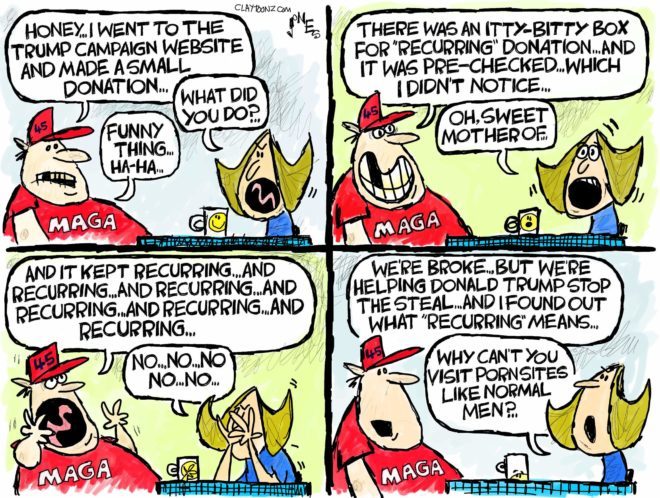 Donald Trump is a grifter and grifters gotta grift.

We know Trump is a grifter. The people who don’t want to accept that fact, despite the overwhelming evidence, are members of the Trump cult.

When Trump ran for president in 2016, he boasted how he didn’t need donations…while he accepted donations. Every politician accepts donations. But Donald Trump, being a “businessman” who owns hotels and golf resorts, found ways to put those donations into his own pocket.

As president (sic), he winked-winked and nudged-nudged he was accepting bribes and that to get in his good favor, you should spend money at his properties. Every conservative lobbying group and foreign interest held events, parties, and fundraisers at Trump properties, especially in Washington, DC. Foreign governments, like Saudi Arabia, would rent rooms at Trump hotels while the top diplomats would actually stay in hotels Trump didn’t own, probably because they wanted to stay somewhere better and not get bedbugs from sleeping on an infested mattress.

Remember the video of a Republican event shortly after Trump was sworn in and there were people throwing up heils? Yeah, that was the Washington Trump Hotel.

Usually, when people kiss their boss’ ass, they use flattery. You would think with Donald Trump, they’d tell him his ill-fitting suits looked wonderful or that the thing on his head didn’t look like a bleached weasel carcass. But no. Attorney General William Barr wanted to throw a party, so he spent around $30,000 to hold it at the Trump Hotel in Washington. You would think suppressing investigations into Trump goons, lying about Russian meddling, and dropping a huge deuce on the Mueller Report would be enough ass kissing. But not William Barr, who felt the need to hand Trump $30,000.

There are places that specialize in selling mattresses. They’re called retail stores. That’s where a normal non-corrupt person would purchase a mattress. Scott Pruitt, who was on the Trump cabinet at the time as director of the Environmental Protection Agency (in charge of dropping deuces on the environment), inquired about purchasing a used mattress from the Washington Trump Hotel. You would think after hearing the Russian hooker pee-pee story, even if it’s not true, Donald Trump would be the last person you would buy a used mattress from.

Why did Donald Trump take the leaders of foreign governments to his resorts? That way, he got to charge their governments hotel fees too. Of course, people eat…so they gotta pay for that too. Remember when he boasted about how much Xi Jinping loved the chocolate cake at Mar-a-Rob-o? That slice of cake probably cost $89.79.

Donald Trump attempted to host the G-7 Summit at one of his failing resorts and claimed it was the best location…and only suitable location in the nation for the summit. His ambassador to the United Kingdom, who also owns the New York Jets, attempted to get the British Open golf tournament held at one of Trump’s UK golf resorts. By the way, golf experts and golfing publications rank Trump golf resorts as s–t. The only time you see an alligator at a Trump golf resort in Florida is when he’s using it as a short cut to a better golf resort.

Trump supporters love and belief in all things Trump begins and ends with him being a rich man…but they ignore that he inherited and grifted his way to becoming rich. They ignore his tax scams. They ignore he pays less in income taxes than they do. They ignore all the businesses of his that have failed. Donald Trump’s most successful business is convincing stupid people he’s successful at business. But even now, selling his name to hotels he doesn’t own is failing. After he sent racist MAGA terrorists to topple the government, putting Trump’s name on your hotel would be akin to calling it “Bin Laden Comfort Bed & Suites.”

As I said, Trump supporters are the only ones who fail to see that Donald Trump is a conman, even as they spend $30 for Trump straws. But, the ones being taken for thousands of dollars may be starting to see the light.

Stacy Blatt is a Trump supporter who lived on $1,000 a month while battling cancer. Rush Limbaugh told Mr. Blatt that Donald Trump needed his help. So Stacy Blatt sent Donald Trump $500. Wow. That’s a lot for someone in Mr. Blatt’s position and very generous. Then, Stacy Blatt contributed another $500 the next day, and another $500 the next week, and eventually gave Donald Trump $3,000, depleting his bank account and making his rent and utility payments bounce. Only thing is, Stacy Blatt did not know he was contributing beyond the first donation of $500. He didn’t know until everything started bouncing.

Stacy Blatt did not notice that box for recurring donations was pre-checked. What’s more, he didn’t notice the SECOND prechecked box, known internally as a “money bomb,” that doubled a person’s contribution. Stacy Blatt was not the only person who failed to notice the grifter boxes. Thousands fell for this. Money-bomb? They should call it “grifter-bomb.”

Soon, banks and credit card companies were inundated with fraud complaints. Why? Because it was fraud. Donald Trump is a thief. And even as some people received refunds, many still had to pay overdraft fees. Many even canceled their credit cards and closed their bank accounts. Banks have those pre-checked boxes too where you agree to allow them to pay charges when your account is overdrawn and add $30.00 to each one. I received a letter from my bank offering that “protection” about a decade ago and I burned it. That “protection” can lead to you being thousands of dollars in debt before you’re even aware of it.

All political campaigns have to issue refunds for various reasons. Usually it’s over legal limits. Often, a contributor gives too much and the campaign notifies them and returns some of the donation. For example, the Joe Biden 2020 presidential campaign and other Democratic committees issued online refunds totaling $21 million. The Trump Campaign, the Republican National Committee, and other associated fundraising goons issued over $122 million in refunds to online donors.

The Trump Campaign refunded 10.7 percent of the money it raised on WinRed, the for-profit fundraising platform it used for online donations. The Democrats only refunded 2.2 percent it raised online through its platform, ActBlue.

Doesn’t that kinda tell you who you should have voted for? Hey, I’m going to vote for the guy who doesn’t steal from elderly people on fixed incomes battling cancer.

Donald Trump was able to use all this stolen money in the final months of his campaign, and when the bill came due to issue refunds, he used money from his “stolen election” lie fundraising campaign to cover those. It’s a shell game. On top of that, it amounted to an interest-free loan from his cult. These people literally paid interest in overdraft fees to give Donald Trump a loan.

Do you remember when goons like Ronna McDaniel, the R.N.C. chairwoman, went on Fox News and other venues to boast about the fundraising of the Trump Campaign? Yeah, nuts like her and Jason Miller, who still has a job lying for Trump, never mentioned the part about stealing from their own supporters.

I was wrong. Donald Trump is successful at two things. Convincing people he’s successful and stealing money. The Trump Campaign and RNC accounted for three percent of all credit card fraud in the United States in 2020. Political donations account for a very small part of the U.S. economy, so that three percent is a LOT. This is another reason Donald Trump should be in prison.

Hopefully, other Trump supporters won’t have to learn that lesson as late as Stacy Blatt did, on his deathbed.

Donald Trump is a grifter and he will literally grift you to death.