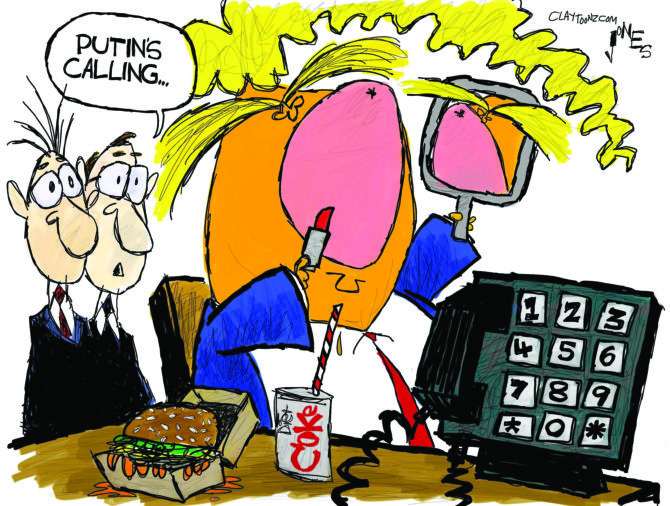 Donald Trump and Vladimir Putin had a phone call last Sunday. How do we know this? Russia told us.

This isn’t the first time details of a Trump/Russia encounter came from the Russian side. Donald Trump is very secretive about his dealings with Russia. It’s like his taxes. He doesn’t want us to know about them. This time, it took the White House 24 hours to confirm what we already learned from the Kremlin.

When Trump first hosted Russians in the Oval Office, he didn’t allow any American media into the room, but the Russians were able to bring their media/propaganda people in with their cameras and recorders. The first pictures, and perhaps only, to come out of this meeting, showing Trump, the Russian foreign minister, and ambassador yukking it up, came from the Russians. They beat the White House at releasing an official photo.

Trump has demanded translator notes to be given to him after one-on-one meetings with Putin. At other times, there hasn’t even been a U.S. translator, just the one provided by Russia.

Trump has always limited the number of people allowed to hear his calls with Putin. But after the fallout from his attempts to extort the president of Ukraine in a phone call, the number of listeners is even more limited. And on top of that, the transcripts are hidden in unusual places. Not only are they stored in servers where they don’t think anyone will look, but they may also be taped to the back of Trump’s toilet.

Congress has even gone to court to obtain records of Trump’s meeting with Putin. Currently, that case against Secretary of State Mike Pompeo is moving forward.

Nancy Pelosi said, “All roads lead to Putin” when it comes to Trump. Arguing that Trump isn’t indebted to Russia is like arguing the guy isn’t a racist. It’s right in front of you and it’s loud and clear.

Russia helped Trump win the presidency. Before the election, Trump praised Putin over Obama. Trump refused to criticize Putin’s strong-arm tactics and in defending him, criticized the United States with, “There are a lot of killers. You think our country’s so innocent?” Trump was attempting to build a Trump Tower in Moscow DURING the 2016 campaign and in doing so, offered Putin a bribe. Trump refuses to acknowledge Russian involvement. Trump’s campaign invited Russian interference multiple times in Trump calling for it (Russia, if you’re listening) to inviting Russians with dirt into their campaign headquarters in Trump Tower. Trump has taken Putin’s side over America’s intelligence agencies. Trump congratulated Putin on winning a sham election. Putin has said he wanted Trump to beat Hillary Clinton. Trump has called for Putin to be reinstated into the G7. Trump’s dealings with Ukraine is partly about creating a new conspiracy theory to take blame off Russia for their election meddling (why would Trump want to take blame away from the perpetrators?) and denying military aid to that nation helps Russia. Putin is even defending Trump from impeachment. According to reports, Putin invited Trump to Moscow during Sunday’s call. You can bet if Trump wins reelection, he’ll visit Moscow and Putin will get an Oval Office visit.

Of course, that doesn’t mean he’s not also an idiot.