Posted on June 3, 2021
You are here: Home / Politics / President Kafka does his Orwell Impression 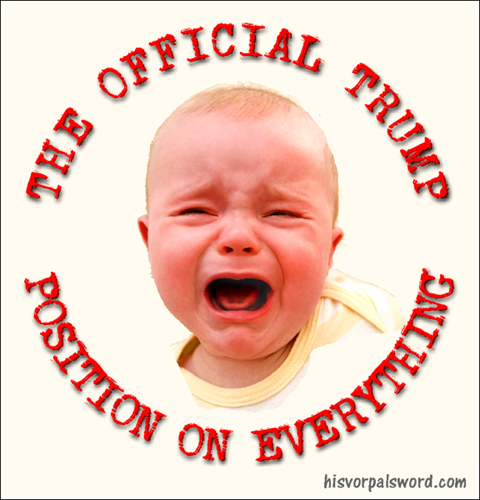 —  By the authority vested in me as President by the Constitution and the laws of the United States of America, it is hereby ordered as follows:  —  Section 1.  Policy.  Free speech is the bedrock of American democracy.

“Free speech”?  The Trumpkin is whining because Twitter added two fact check tags to his outrageous lies that voting by mail was massively fraudulent.

Is it worth discussing here? Nope: if you don’t understand that facts are NOT antithetical to free speech, I can only hope that your ward nurse takes note and ups your dosage.

Weirdly, Twitter did NOT remove Trump’s sleazy smears of Joe Scarborough and Combover Caligula’s claim that somehow, Scarborough – who wasn’t even in the state at the time — murdered a Florida staffer … medical examiner’s reports to the contrary.

Not even when the staffer’s widower begged Twitter to take down the tweet. Because, you know, they’re “ethical.”*

[* Full disclosure: I was removed from Twitter for “hate speech” because I listed the classical fallacy that EACH Prager U tweet relied on. I appealed and was told that I could not be reinstated for telling such hideous truths. So I am NOT Twitter’s greatest fan.]

And, ironically, of Trump’s executive order carried any legal weight (it doesn’t) whatsoever, said widower and Joe Scarborough could sue BOTH Twitter and Trump for defamation (among other things, I’m not a lawyer; I just play one on the intertubes).

Indicating the level (in angstroms) of the depth of Trump’s pseudo-analysis of the First Amendment and the massive size of his butt-hurt over being referred to fact checks of his blatant lies.

This is not the behavior of an American president or, indeed, of any elected official acting within the legitimate purview of his legal powers.

This is the behavior of a cranky child throwing a tantrum.

There is a lot (a WHOLE lot) of legal analysis out there that goes into any depth you might desire, so I’m not going to redundantly re-describe it here.

Suffice it to say that the pronouncement is Orwellian double-speak: an attempt to censor and bully a social media site for having had the temerity to question our would-be dictator.

It is the literal antithesis of Americanism clothed in highfalutin’ terms and concepts that it fundamentally contradicts and explicitly rejects.

Donald J. Trump is a clear and present danger to the United States of America and must be removed by any lawful means necessary, as soon as is humanly possible.