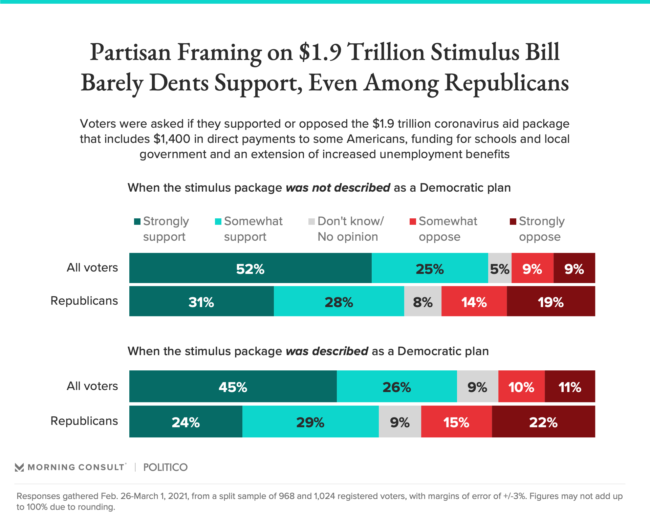 As the Senate prepares to advance President Joe Biden’s $1.9 trillion COVID-19 relief bill, new Morning Consult/Politico polling shows strong bipartisan support for the measure is holding against an uptick in Republican attacks on its size, scope and price tag.

In the new survey, conducted Feb. 26 to March 1, 77 percent of all voters and 59 percent of Republicans said they supported the measure which provides direct payments to some Americans, extends enhanced unemployment benefits through July and provides funding for state and local governments as well as K-12 schools and universities.

That level of backing from the public is consistent with findings from a survey conducted ahead of the House’s Feb. 27 successful vote on the bill, which passed without any GOP support.

The latest survey also sought to test whether a more partisan framing to Biden’s plan would materially impact the level of support: Half of voters were shown question wording that did not mention that the plan was Democratic in nature, while half were informed that it was the Democrats’ proposal.

The distinction mattered little. When provided the partisan framing along with the details of the proposal, 71 percent of voters — including 53 percent of Republicans — still supported it.

The split-sample responses carry a margin of error of 3 percentage points, while the broader poll of 1,992 registered voters has a 2-point margin of error.

Back to the poison vote-a-rama that the Republicans are promising, Biden held a private call with Democrats on Tuesday, in which he “emphasized the need for Democrats to remain united around a bill that has drawn wide bipartisan support outside Washington, counseling lawmakers to move swiftly and reject so-called poison pill amendments from Republicans intended to kill it,” according to sources to The New York Times.

Republicans think they can get “gotcha” moments out of this debate, even when they are attempting to delay wildly popular legislation that gives people money—and, just as important, coronavirus vaccine in their arms before summer. “It’s all about TV commercials,” Republican Sen. John Cornyn of Texas told CNN. “Make people accountable for their votes. There is not much they can do if they are determined to hang together there is nothing we can do to change the outcome. If they really want to do this, they can probably get it done.” They are still dramatically misreading the moment, thinking they can use the same kind of tactics to poison this bill that they used on Obamacare a decade ago.

From the very beginning of this crisis, Republicans have underestimated the seriousness of it. Through climbing infection rates and death tolls, a plurality of Republicans have remained “not concerned at all” about the spread of the disease. That’s reflected—amplified!—by the people they’ve elected to Congress.

Whatever amendments the Republicans bring, even if they get a few Democrats for majority support, can simply be swept away at the end of the voting by Schumer. He can introduce the final amendment that would strip out any of those amendments, and do it with simple majority support.

Basically, both parties are now taking a calculated risk: