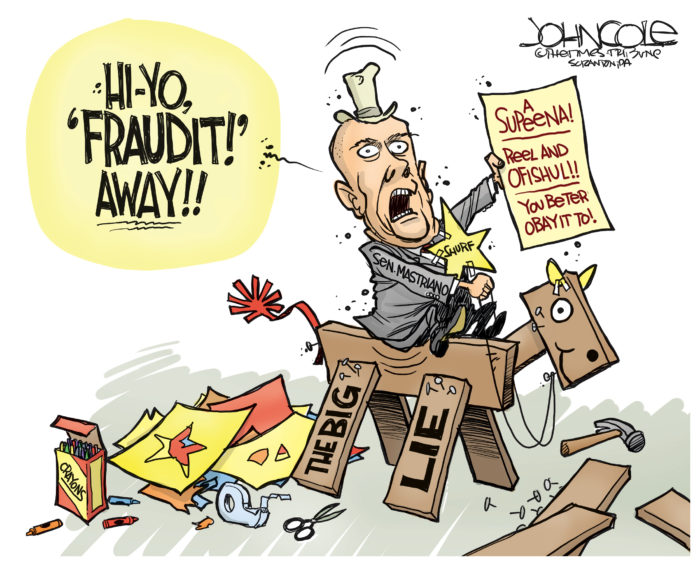 The writer Alan Furst has shrewdly observed, “Fascism famously stomps around in jackboots, but it sometimes wears carpet slippers, padding about softly on the edges of one’s life, and in a way that is worse.”

And so here we are, in my home state of Pennsylvania, face to face with the worst.

No need for jackboots here. In last night’s gubernatorial primary, pro-coup Republicans merely went to the ballot box and chose a MAGA loon who loudly agitated to overthrow Joe Biden’s victory and nullify the will of the people. And if this guy winds up as governor, you can forget seeing an honest election in this swing state in 2024.

Granted, conventional wisdom decrees that Doug Mastriano has no chance of beating popular Democratic nominee (and current attorney general) Josh Shapiro. To which I say: Have you ever visited Pennsylvania? More specifically, the vast expanse between Pittsburgh and Philadelphia?

In a formerly sane America, a fascist fellow traveler like Mastriano would pull a single-digit percentage in any statewide election. But apparently, for Duh Republican Base in 2022, plotting a coup is what passes for a sterling credential.

Mastriano didn’t cheer on Trump from the sidelines – he was a central player. In late November 2000, from his perch as a state senator, he introduced a resolution to erase Biden’s popular vote victory and instead authorize the Republican-run state legislature to gin up its own slate of electors, who’d then magically award the swing state to Trump.

Mastriano insisted that Dear Leader had been “cheated” out of his victory by a “corrupt” election process – “There is mounting evidence that the PA presidential election was compromised” (there was no such evidence) – and therefore “we are going to take our power back.” When all that failed, he bused supporters to the Capitol insurrection on Jan. 6. And when that failed, he wasted time in 2021 agitating in vain for an “audit” of the Pennsylvania election.

He has been subpoenaed by the Jan. 6 Committee (he has ignored it). He’s also cited in a Senate Judiciary Committee report for having “raised a litany of false and debunked claims of widespread election fraud.” He’s also defiant about his presence at the Capitol on insurrection day: “Shame on the media and the Democrats who are painting anyone who was down there as a villain.”

But never mind the past. Take a gander at the potentially fascist future.

I’m well aware that the word fascist sounds hyperbolic. But we’re talking here about the exercise of dictatorial power and the suppression of democratic opposition. Denying the reality of Mastriano would mean that we’ve learned absolutely nothing these last six years.

He’s already telling us who he really is. He recently surfaced at a QAnon meeting, where he mocked what he called “this myth of the separation of church and state,” and vowed that in November “we’re going to take our state back. My God will make it so.” He’s also an anti-choice zealot who has already floated a bill to ban all abortions after six weeks of pregnancy. If/when the Supreme Court nixes Roe v. Wade, Mastriano would work with the Republican legislature to end women’s bodily autonomy. (He says: “I don’t give way for exceptions, either.”)

Most importantly, a Pennsylvania governor has the power to appoint the state’s top election official (the secretary of the commonwealth, who certifies election results), and it’s a cinch bet that whoever fills that role would work with Mastriano to ensure that the 2024 contest is rigged for MAGA.

So much for Pennsylvania being the birthplace of democracy.

Do I sound like an alarmist? Was I an alarmist in 2016 when I wrote repeatedly (and in vain) that Trump was a “clear and present danger to our democratic values”?

Pennsylvania Democrats are reportedly giddy that Mastriano is the Republican gubernatorial nominee because there’s supposedly no way he can beat Josh Shapiro. (I seem to recall that many Democrats in 2016 were giddy about Trump because there was no way that such a clownish fraud could beat Hillary.) But this is no time for haughtiness.

If grassroots Democrats do what they usually do – stay home en masse during non-presidential elections – then fascism, in Alan Furst’s words, will no longer be “padding around softly on the edges of one’s life.”