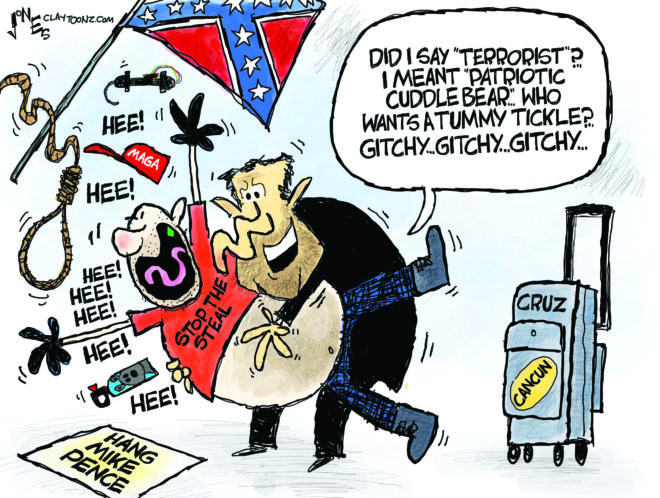 A man attacks Ted Cruz’s wife. What does Ted Cruz do? He becomes a sycophant for that man.

His state is ravaged by a winter freeze leaving millions without power and killing hundreds. Ted flees Texas to Cancun where it’s nice and warm and there are beach resorts and daiquiris.

Ted Cruz’s country is attacked. Instead of defending his country, Ted supports the terrorists.

When Ted fled Texas for a beach resort in Cancun, he went back to Texas immediately and went into the GOP Photo-Op Recovery Program, making sure the public saw him in his Texas-flag face mask while helping put cases of water into car trunks. Later, he blamed his daughters for the Cancun trip with the logic that a good father takes his daughters to Cancun when they plead for him to do so.

Even though Ted Cruz helped the effort to block certification of the electoral college, won by President Joe Biden, he has called the attack on the Capitol one committed by terrorists.

And even when Ted occasionally gets something right, which is rarer than a woman looking at Ted and saying, “Mmmm, I wants me a piece of that,” he quickly backtracks. Donald Trump is a sniveling coward and Ted shouldn’t have backed away from that. But just like Trump, Ted is a sniveling coward and that goes with his smarmy condescending icky creepy personality. Ted will grovel and kiss any ass he believes will help him become president, even the asses of the vilest, like Donald Trump and Tucker Carlson. On Thursday night, Ted Cruz groveled to Tucker Carlson.

The entire nation calls Ted Cruz a liar but it’s politically damaging when Tucker Carlson calls you one, even though he himself is a liar.

Ted Cruz went on Tucker’s show and said his “terrorists” comments were “sloppy” and “frankly dumb.” That could be a good defense for Cruz because a lot of his comments are sloppy and dumb. But here, Ted was quibbling.

Tucker was upset over the white nationalists who tried to overturn the election to install Donald Trump as a fascist dictator and said to Ted, “You told that lie on purpose, and I’m wondering why you did.”

This is when Ted quibbled. Lying Ted said, “What I was referring to are the limited number of people who engaged in violent attacks against police officers. I think you and I both agree that if you assault a police officer, you should go to jail. I wasn’t saying the thousands of peaceful protesters supporting Donald Trump are somehow terrorists. I wasn’t saying the millions of patriots across the country supporting Trump are terrorists.”

That’s like saying only the pilots of the planes were terrorists on 9/11. The other guys were peaceful protesters. Osama bin Laden isn’t a terrorist because he wasn’t on the plane. He was only the mastermind. He only sent the terrorists.

The FBI defines terrorism as: “violent, criminal acts committed by individuals and/or groups to further ideological goals stemming from domestic influences, such as those of a political, religious, social, racial, or environmental nature.”

Ted Cruz was right and he shouldn’t have backed down, especially to the likes of a lying coward like Tucker Carlson.

Ted Cruz went on to say, “So, of course, it would be ridiculous for me to be saying that the people standing up and protesting to follow the law were somehow terrorists. I was talking about people who commit violence against cops.” Everyone who entered that building on January 6, 2021, to “protest” the legal election was committing an act of terrorism. Everyone who broke windows, stole property, and defecated and urinated on the floors and hallways were terrorists. Ashli Babbitt was a terrorist.

Tucker spent the entire segment insulting Ted Cruz and calling him a liar. Ted continued to grovel while the dangling little dots that vaguely resemble testicles receded into his body.

Tucker Carlson ended his segment by telling Ted Cruz, “I guess I just don’t believe you, and I mean that with respect.”