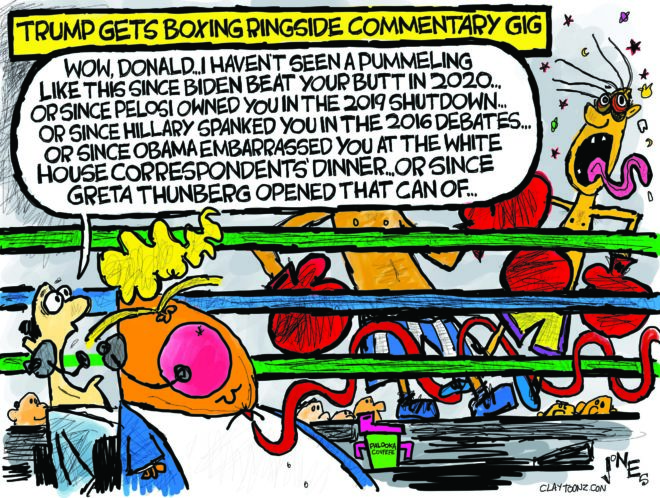 I have already posted this cartoon on Facebook and immediately, I got the question, “Is this a thing?”. Unfortunately, or thank the gods, it is a thing.

Donald Trump and his idiot underling namesake, Donald Trump Jr, will be doing ringside play-by-play commentary in Hollywood, Florida for a boxing match between Evander Holyfield and Vitor Belfort. These two guys are way out of their prime, out of shape, over the hill, put of their depth, in over their heads, and will probably only humiliate themselves and shouldn’t be anywhere near a boxing ring. The two boxers are probably too old for this too.

This fight will be on a boxing streaming platform (I’m not telling you where) and if you find it, it’ll cost you $49.99, which would be about two and a half orders of Trump straws.

As I said, these boxers are old. Holyfield is 58 and his opponent, Vitor, is old for for boxing too at 44, but a 14 year age difference between boxers isn’t a real competition. This is a joke. But nobody’s going to purchase this event to watch two old guys fight. They’re going to purchase this two watch two dumbasses bark for what will probably be two rounds of old guy’s punching. If you really wanted to watch two old guys slap each other silly, you could get that on a public bus for $1.25. Bonus: One or both of the old guys might be racist so you get the entire Trump package right there.

But other than praising Confederate generals and claiming their statues could have defeated the Taliban, this is the best way for Trump to put the attention back on him on 9/11.

What? 9/11? Yes, apparently, on the 20th anniversary of the terrorist attack that hit the Pentagon, destroyed the World Trade Center, and killed nearly 3,000 people, folks might be talking about something other than Donald Trump and his big stupid orange ass. Donald and Donald doing play-by-play of a geezer fight might just fix that and divert the attention back on Trump and Trump.

Those loser presidents, George W. Bush, Bill Clinton, Barack Obama, and Joe Biden, will probably be observing the anniversary in some sort of solemn manner with dignity. Suckers. If they were smart, they’d be calling play-by-play for a mud wrestling match between Grimace the shake monster and Mayor McCheese and charge twenty bucks to see it on YouTube.

If another other former president was going to call a boxing match on 9/11, they’d be vilified on Fox News. But Trump doing it is exactly what MAGAt nation wants. Do you remember when Reagan was criticized for making paid speeches after his presidency, or when Clinton was criticized for doing the same thing? People are still screaming at Barack Obama for tan suits, mustard on burgers, and mom jeans. But charging to ramble word salads at a geezer fight is OK…if you’re Donald Trump. I mean, it’s not like anyone expects anything dignified from Trump anyway, or Coke Jr…I mean, Don Jr.

We don’t know how much Trump is being paid for this event, but reportedly, he’s bragged to friend that the amount is “obscene.” He’s also getting used of the pay-per-view company’s private jet. I wouldn’t feel safe flying on a Trump plane either.

I have another not-so-bold prediction: In the future, Donald Trump will further reduce himself and do a wrestling event. He’ll probably be on some pay-per-view where he’s shaving Vince McMahon’s head. What? He already did that?

OK. Next prediction: Trump starts doing commercials with the General and Shaq, or with Shaq and Papa John’s (they fired their last racist), or Shaq and toner cartridges (every color except black and brown), or Shaq and home security, or Shaq and Icy Hot, or Shaq and Gold Bond, or Shaq and…you get the idea.

Or better yet, Trump joins Insane Clown Posse and raps about beating Biden’s ass. I mean, he’s already done half of that. No, not the beating. Just the bragging. Trump used this boxing event to speculate on him boxing someone and said, “I think probably my easiest fight would be Joe Biden because I think he’d go down very, very quickly.”

When the election was called for President Biden, he jogged to the podium to make his acceptance speech. The only thing that jogs on Trump are his man boobs while he’s breathing. I seriously doubt Trump would be any contest for President Biden as he’s already got his ass kicked by him once before. Also, to get into the ring, there might be stairs.